In a ceremony both solemn and impassioned, the Loreto City Council voted unanimously on Monday, the 5th of June, to approve the Sister City relationship between Loreto and Buenaventura (Ventura). Loreto Presidente Jorge Avilés presented Ventura Mayor Cheryl Heitmann with the Key to the City of Loreto in the Municipality Council Chambers.

Speeches from Avilés and Heitmann co-expressed the historical significance of the joining of the two cities, with an eye toward the future Sister Park/Sister Reserve connection. Avilés directed everyone’s attention to the Council Chamber wall, where the Key to the City of Ventura hangs, flanked by the proclamation papers. Comments by Padre Tom Elewaut from Mission San Buenaventura; Padre Lucio Francisco Sánchez Loya from Misión de Nuestra Señora de Loreto Conchó; Norma Garcia, Board of Directors of Eco-Alianza and Chair of the Loreto Sister City Committee; and Linda Kinninger, Eco-Alianza Co-founder and co-coordinator of the events, expressed the rich opportunities for both cities in areas of cultural and historical exchange, and eco-tourism based activities. 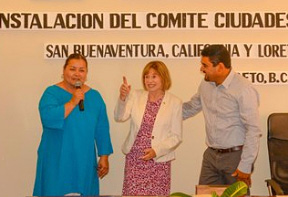 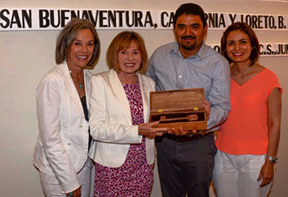 The Ventura Sister City contingency included, along with the Heitmanns and Father Tom Elewaut, Marla Daily, member of Eco-Alianza’s Advisory Board, Kirk Connally, Marcia Morehart, Buz Bonsall, Caryl Cantrell and Marty Armstrong. Following the ceremony, all were invited to join the Loreto Sister City Committee and additional members of the community for a fiesta at Rancho El Jaral. The evening meal was served by candlelight on the lawn next to the Sea of Cortez, where guests were treated to a full moon rising behind the silhouette of Isla Carmen. A mariachi band played in the background.

A trip to Mission San Javier was first on the agenda the next morning, with guests boarding vans for the drive up the mountain. Joining the Ventura guests were Rodolfo Palacios, Eco-Alianza Board member, as guide, Richard Jackson, Jr., Linda and Anthony Kinninger, Ivette Granados Marines, Secretary of Tourism, Nidia Ramirez, and Catharine Cooper. 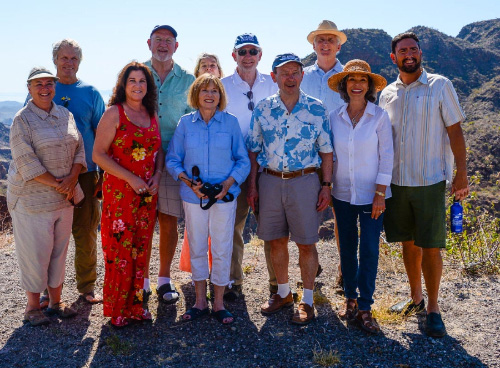 The small town of San Javier was relatively empty in the already heated morning. The wide cobblestone avenue leading to Mission Francisco San de Javier Viggé-Biaundó was devoid of traffic or pedestrians. Father Tom stepped out and looked with awe at the vintage structure of limestone and plaster, the second oldest mission in Baja California. His eyes rested on the bell tower, and the rope that led from the bell to a tree in the flowered courtyard. Without hesitation, Father Tom surprised everyone by untying the rope and ringing the mission bell. A worried mission grounds keeper stepped out of the door, but was quickly reassured that the bell ringer, was in fact, Father Tom, a Padre. 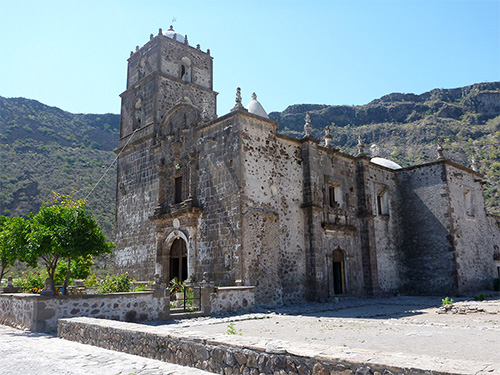 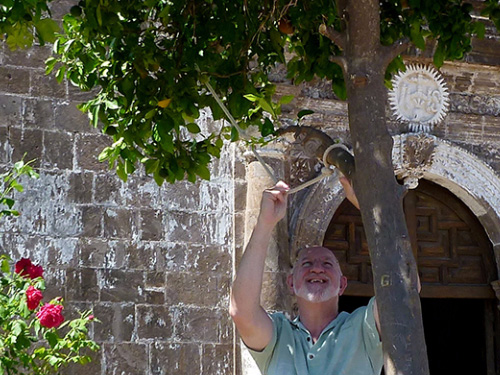 Rodolfo Palacios led a guided tour of the Mission and shared architectural interpretations and historical facts. The keystone in the first archway is in the shape of a pomegranate, which represents union of the churches and hope in resurrection. The altar pieces were all created in Tepotzotlán shipped from mainland Mexico.

The seldom-visited museum was opened, and the guests were able to view artifacts, including brocade vestments, paintings, and stone works that remain from the original Jesuit founding in 1699. Father Tom explained the relationship of Father Junipero Serra, who was sent by the Pope to lead the Franciscan faction at the removal of the Jesuits, and went on to found the Missions in Alta California, with the last one being Father Tom’s Mission San Buenaventura. A visit to the top of the bell tower, reached by an increasingly narrow and steep spiral staircase, revealed stunning views of the pueblo of San Javier and surrounding countryside. 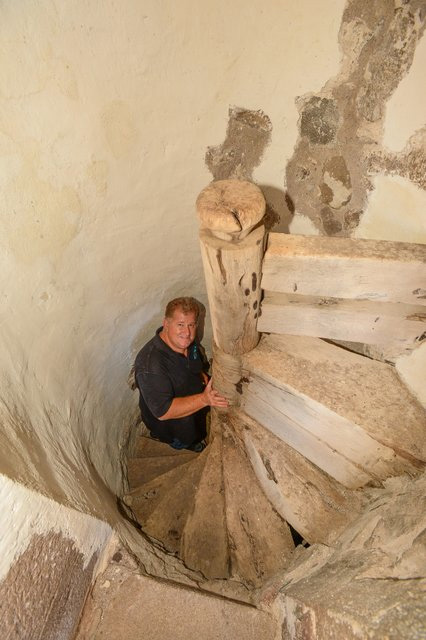 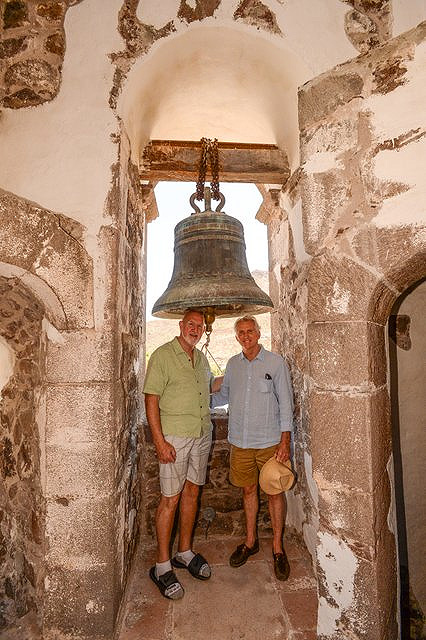 Father Tom Elewaut and Buz Bonsall with the mission bell. 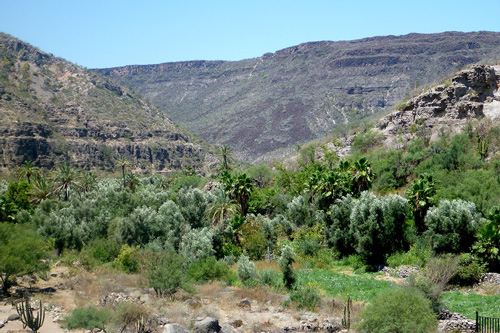 Palm and olive gardens visible from the top of Mission San Javier.

Following the visit to San Javier, everyone gathered at Eco-Alianza’s headquarters, the Community Center for the Environment, for a tour and presentation by Hugo Quintero Maldonado, Executive President, and outstanding support staff who spoke about Eco-Alianza’s several programs and projects: including Hector Trinidad, Director of Marine and Coastal Conservation programs, Edna Peralta, Coordinator of Environmental Education programs, Nidia Ramirez, Coordinator of Education and Outreach programs related to marine conservation, and Liaison for the Sister City and Sister Park programs and projects. Alejandro González, Director of the Bay of Loreto National Park and CONANP staff gave an informative presentation related to their collaborative program regarding climate change. 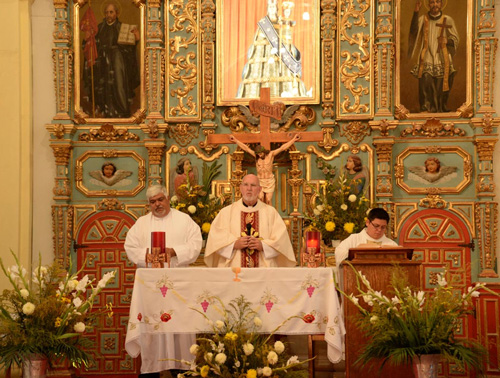 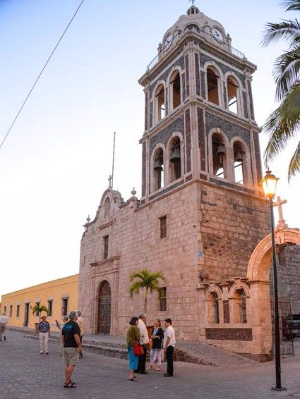 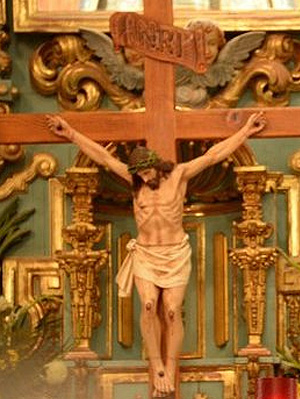 The following morning the guests gathered at the small Marina (La Darsena) on the Malecon and boarded boats for a tour of Parque Nacionál de Loreto. Joining the Ventura team was the Park Director, Alejandro González, Hector Trinidad, Israel Popoca, Sub-Director and Ivette Granados.

Three boats crossed the 11 miles to Isla Carmen, accompanied by a pod of leaping dolphins. The lead boat, “La Perla,” with Captain Tony Kinninger at the helm, pulled into Blandera Bay where clear blue green seas registered a warm 80°F. Leaving the bay and turning north, the boats eased into a narrow bay called Arroyo Blanca where the water was a cooler 78°F. The boaters could no longer be contained, and everyone jumped in the water for a swim and some snorkeling. 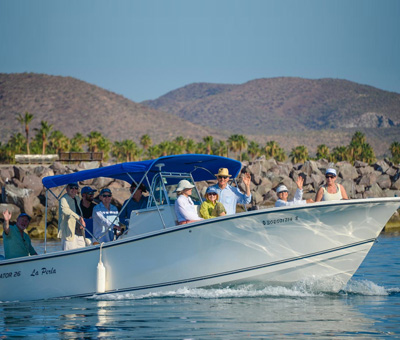 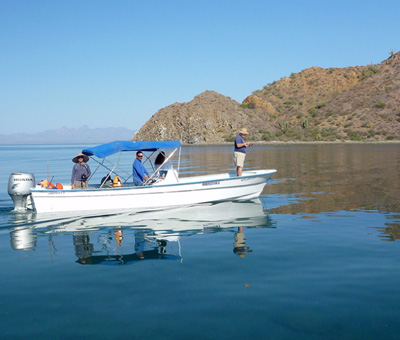 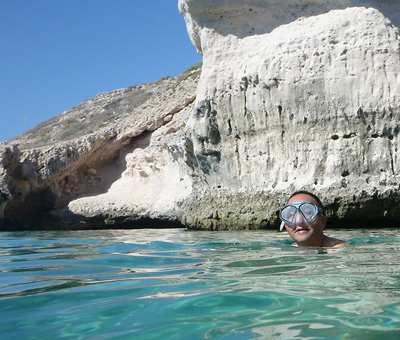 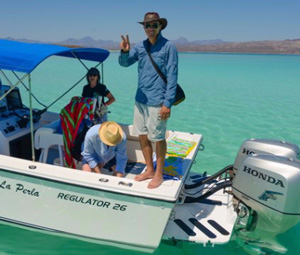 Back on the boats, the flotilla motored to Isla Coronado for a look at the small sea lion colony before completing the island circuit for a picnic on the white sand beaches in the hooked-shaped west-facing bay. A picnic lunch was ‘floated’ to the beach and served under the shade of one of three palapas that are part of the park structures. Conversations ranged between fish identification – a needlefish and several sergeant majors swam next to shore – to comparisons of Channel Islands National Park and Parque Nacionál Bahía de Loreto. The pending certification of the two parks as Sisters will provide extensive opportunities to share science, research and programs of conservation and eco-tourism and sustainable growth. 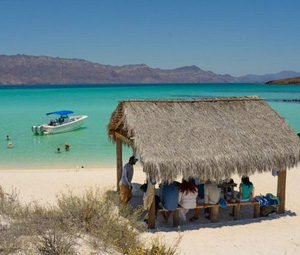 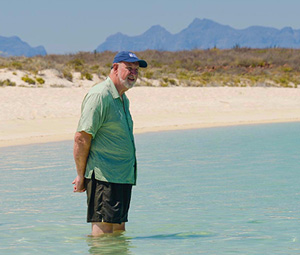 A wrap-up meeting was held at Rancho El Jaral on the last morning. Thoughts and ideas were exchanged on ways to deepen the relationship and add cultural and economic value to both Loreto and Ventura. Mayor Heitmann spoke briefly about the historic, cultural, religious, and natural resources that are common to both cities, and exchanges that will benefit both municipalities. A joint-calendar has been decided as the first shared project – details as to the content and format are currently being discussed. Carlos Posadas, Professor from the University of Baja California Sur, Loreto Campus, expressed an interest in an academic exchange. Father Tom spoke of deepening exchanges of the history of the two missions, especially in light of the pending canonization of Father Junipero Serra in September.

Farewells are always sad, but the good-byes of this trip felt more like hellos. A deepened commitment between the two cities, an expansion of friendships, and a building base of ideas for exchanges filled the hearts and minds of all who participated. The door has been opened for continued exploration of how best the two municipalities can support and benefit one another. 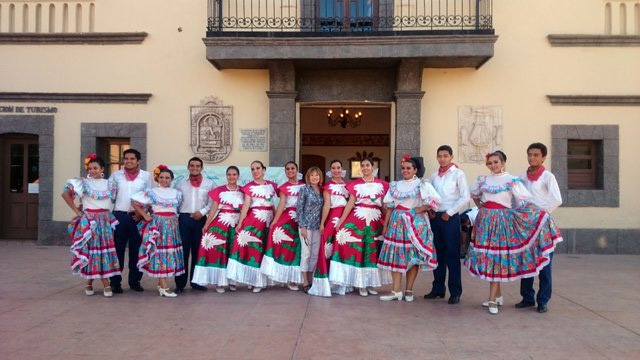