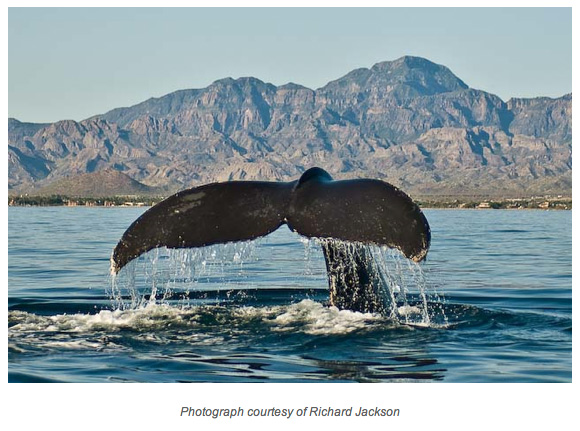 As we enter the “dog days” of summer, Eco-Alianza is buzzing with activity and planning for several important new projects to be unveiled over the next year. For all our supporters and interested onlookers, we are expanding our communications outreach by increasing the frequency of our online newsletter and our social media, and by initiating another exciting new communications project that we will report on here next month.

We have decided to dub our e-newsletter Soundings, to reflect our marine conservation work, our affinity for the iconic Blue Whale, and our desire to reach out to you and all interested parties as we move forward together. Look for Soundings on a monthly basis, and let us know what you think!

Next week marks the 20th anniversary of the Bay of Loreto National Park — more than 510,000 acres of Protected Natural Area incorporating five magnificent islands and more than 48 miles of beautiful shoreline.

Living so close to this natural wonderland, it’s easy to get jaded as to its international significance. Five of the seven Sea Turtle species in the world use the Park for food, shelter, resting or nesting. All of them are threatened or endangered species. The Park provides important sanctuary for the Blue Whale and nearly a third of the world’s marine mammal species. Its islands, coastline and waters provide critical nesting and foraging habitat for more than 20 endangered or threatened species of birds, fish, mammals, reptiles, plants, and other life forms. It’s widely varied ecosystems support tremendous levels of BOTH marine and terrestrial biodiversity, including several animals and plants found nowhere else in the world.

Of course, the Park also provides tremendous economic benefit for Loreto and BCS, from attracting ecotourists, anglers, and recreational boaters, to providing sustenance and business opportunities for Loretanos and visitors alike. It’s clear to see why the Park was named a Ramsar site in 2004 for its significant conservation of wetlands, and as part of a UNESCO World Heritage Site in 2005.

Eco-Alianza is proud and honored to partner with the Park on a continual basis, including our Director of Conservation Programs, Héctor Trinidad, serving as President of the Park Advisory Board. Other Eco-Alianza staff, including Program Coordinators Edna Peralta and Nidia Ramirez, and Program Assistants Brenda Garcia and Alex Estrada, also work hand-in-hand with Park managers and staff on a wide variety of conservation-oriented programs.

So, it’s only natural that Eco-Alianza and its CenCoMA headquarters be a part of the Park’s official 20th anniversary commemorative celebrations. Please watch our Facebook page for details of more anniversary week activities, and join us for important presentations in Spanish on the evenings of Tuesday, July 19 and Thursday, July 21. Even if your Spanish isn’t perfect, you will enjoy these FREE informative presentations:

July 19, 6:00 – 8:30 p.m.
— Park Director J. Alejandro González Leija on the Park’s achievements and challenges
— Francisco Fernández on Reefs and their importance, variety, monitoring, and requirements
— Kara Pellowe on Clams and their importance to our culture, economics, and future

Like us on Facebook and log on for ongoing news as the Park enters its third decade of conservation, and as we all join hands to recommit to the conservation ethic. 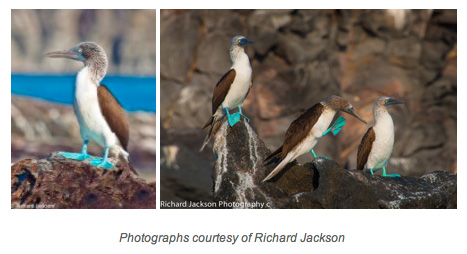 If you’ve ever joined us in the past for our anniversary dinner, auction, and celebration, you certainly won’t want to miss out on this year’s gala, with big changes and important announcements in store. This year’s gala will be more intimate and elegant, and will support our environmental education programs, as well as Loreto community conservation programs.

Tickets are not on sale yet, but please SAVE THE DATE, November 5, and watch this space for exciting details to come.

We have already begun considering and accepting exceptional items for both our silent auction and our live auction. If you have a stunning item, or especially a one-of-a-kind experience or service you can donate, please contact Edna Peralta as soon as possible, at edna.peralta@ecoalianzaloreto.net. 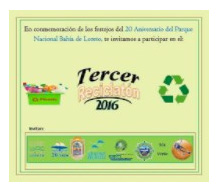 Third Recyclathon Rakes in the Recyclables

This year’s Eco-Alianza Recyclathon has struck a very harmonious chord with the local community. More than 30 five-person teams signed up to participate, and have been scouring the communities for plastics, paper, and cardboard for the last four weeks. Every Friday, the weigh-in station is a hubbub of activity as teams drop off load after load after load to add to their tallies.

As this issue of Soundings goes to press, teams have dropped off 15,018 kilograms of materials (more than 15 tons). With one week to go, several teams are vying for the lead, and many teams will win a wide variety of great prizes. We’ll report on the final tallies next month.

The real winner of Eco-Alianza’s Recyclathon is the Loreto environment. Tons and tons of plastic and paper will end up being recycled instead of being hauled to the Loreto “landfill.” It won’t be burned, and it won’t end up blowing into the marine Park — degrading pristine ecosystems and entangling or poisoning marine life. Better yet, this year’s event and its publicity has spurred several clean-up efforts in Loreto and surrounding communities.

Thank you so much to everyone involved, as this is a real gift to our communities, and especially to the Park on the occasion of its 20th anniversary.

Roughly three years ago, a seed of an idea sprouted into committees and work groups and gatherings. Excitement and energy built around the idea of a Sister Park relationship between Parque Nacional Bahía de Loreto and the Channel Islands National Park off the coast of Ventura, California.

With support from its donors, Eco-Alianza acted as facilitator to develop the idea and pursue the initial steps. Along the way, team members realized that this idea was bigger than just a Sister Parks initiative, and the effort evolved into a full-fledged Sister City alliance because of the commonalities in the towns’ cultures and interests.

Poco a poco (little by little), relationships began to form, community leaders signed on, and information-sharing trips ensued. From Eco-Alianza’s perspective, the prospect offered tremendous potential for bringing additional environmental expertise to Loreto, as well as different types of tourism and promotion, including religious tourism focused on the two Misions, and activities aimed at travelers focused on ecotourism. Cross-cultural sharing about arts, foods, and businesses also took shape.

Within two years, the Mayors of both cities had officially exchanged “keys to the city,” signed documents proclaiming the sisterhood, and been part of traveling delegations on international visits. The Sister City committees in each city also began exploring the idea of Sister Universities (UABCS and University of California), and continued to push for official designation of Sister Parks (Bay of Loreto National Park and Channel Islands National Park).

Last year, the committees joined forces to produce a beautiful 2016 calendar showcasing the natural highlights of each city. Currently the committees are following up by planning a 2017 calendar that focuses on people taking part in eco-tourism activities. The calendars are sold to provide funds to support the international sisterhood. Later this fall (October 27-30), the Ventura Visitors Center will lead a trip to Loreto, which they’re now organizing.

The Sister City relationship continues to grow and evolve, with new members taking the lead here in Loreto to organize further and to push forward on several fronts. We remain optimistic about the chances of our international Sister Parks initiative, between Channel Islands National Park and the Bay of Loreto National Park, becoming a reality in 2016. Watch this space for continued developments!

Along with this month’s Recyclathon, Eco-Alianza is encouraging supporters to take part in Plastic-free July. Join the effort to reduce plastics in our environment by refusing plastic water bottles, single-use plastic bags, coffee cups, and straws and stirrers. Even an attempt to take part offers a valuable lesson on how insidious these items are in our daily lives. Learn more at PlasticFreeJuly.org. 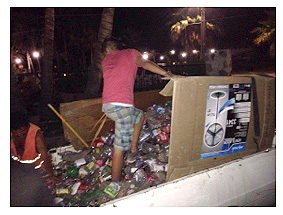