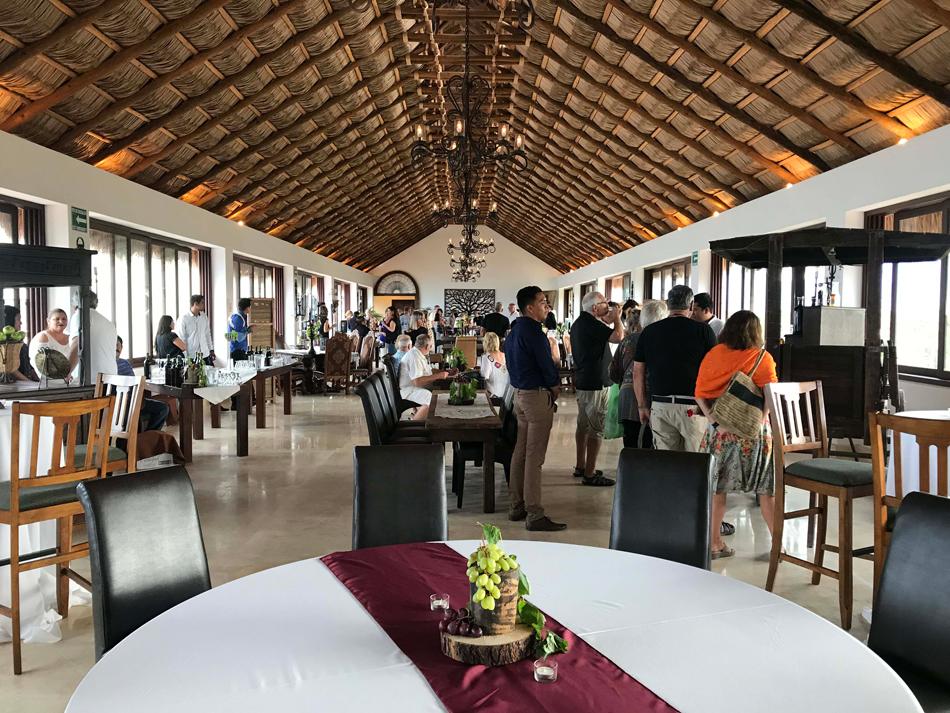 The Board and Staff of Eco-Alianza are proud of the advances we have made this year, and are eager to share some news about them at the upcoming 12th Anniversary Fundraising Gala, hosted by Hotel La Mision the evening of November 16. If you have not yet reserved your space, please do not delay as this event has sold out the last six years in a row. This will truly be an evening to remember, beginning with an amazing venue.

If you are new to Hotel La Mision’s 5th floor Banquet Room, you are in for a exceptional treat. According to General Manager Maria Gamez Castro, the “palapa roof terrace” took a year and a half to complete, including exquisite craftsmanship in the wood structure and thousands of woven palm leaves in the palapa-style roof. Windows on the entire east and west sides of the main hall provide panoramic views of the sea and Isla Del Carmen on one side and of the Sierra La Giganta mountains on the other. Egyptian marble floors throughout are perfect for dancing! 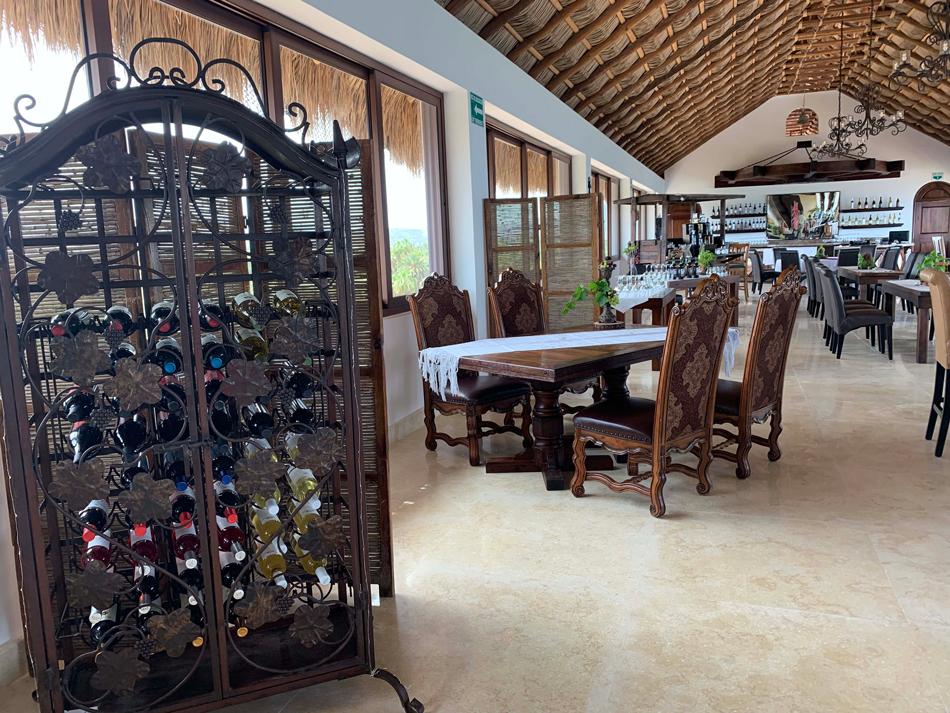 Of course the hotel will provide a wonderful dinner and the exquisite service for which they’re known. What better surroundings to celebrate the natural beauty of Loreto that we all strive to protect? As always, this year’s event will feature a silent auction and cocktails, followed by dinner and a live auction, with amazing items and experiences up for bid. This year’s auction will be shorter than in previous years, with more time for socializing and also for dancing when the auction paddles are retired for the evening. This event is about fundraising, but it’s also about fun-raising! We have a lot to celebrate.

Please join us as we raise a toast to Eco-Alianza’s next 12 years! And please remember to make your reservation today to secure your seats. Reservations can be made with credit or debit cards, through PayPal, or in person at Eco-Alianza’s downtown Loreto CenCoMA headquarters. For information or help regarding reservations, contact Maria.Quintero@ecoalianzaloreto.net

UCNRS/Loreto Sister Reserve Partnership Flourishes As It Picks Up Steam 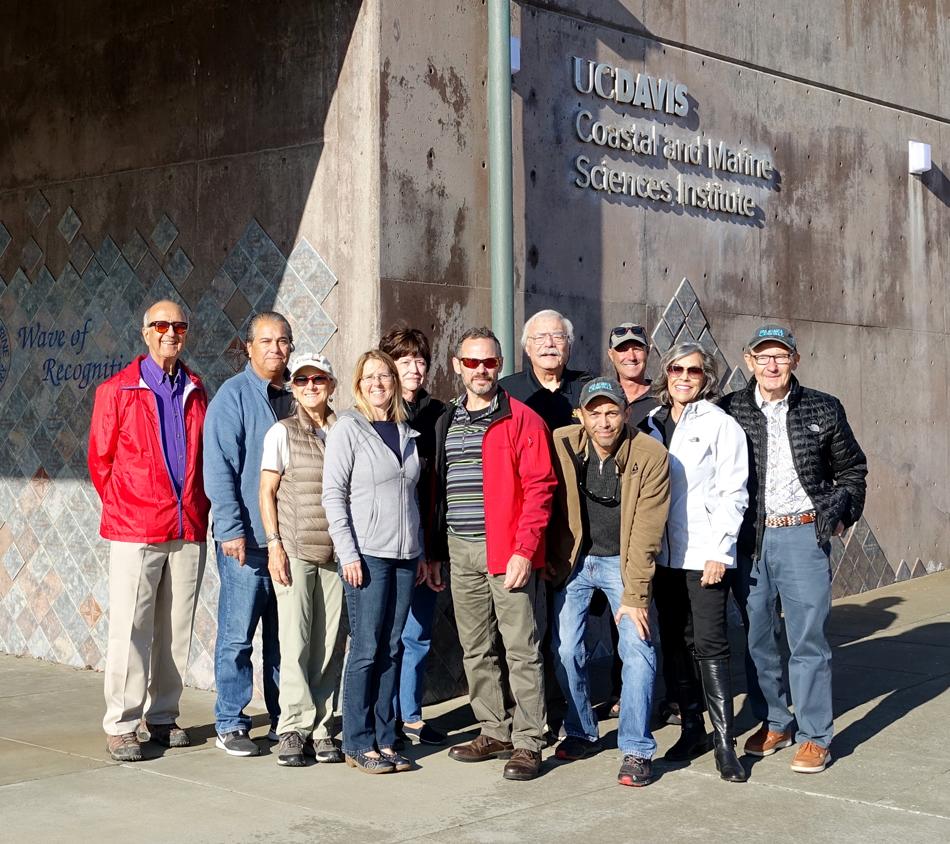 Photos courtesy of Catharine Cooper
Participants from Eco-Alianza and UC Davis gather at the university’s Coastal and Marine Sciences Institute.

Many of the Reserves are complete with field research stations at which researchers can stay for extended periods of time, or to which they can return over many years or decades for the purpose of their scientific research. It is just such a facility that Eco-Alianza hopes to develop for Loreto’s future, after careful analysis of the elements that would help draw scientific researchers here and the research focus areas that would be most beneficial for Loreto, its marine park, and its environs.

Earlier this month, at the invitation of the Dean of the College of Letters and Science, Elizabeth Spiller, and prominent faculty of UC Davis, a delegation from Eco-Alianza took a fact-finding tour to better understand the various qualities of field research stations and to expand discussions with faculty and facility managers at the University of California Davis. Among the eight campuses of the University of California, it was the staff at UC Davis who most strongly supported July’s development and fruition of a 5-year Memorandum of Understanding with Eco-Alianza, setting the Sister Reserve into motion. Each reserve in the UCNRS system is administered by one of the eight UC campuses; UC Davis has six sites, including the Bodega Marine Reserve/Bodega Marine Laboratory.

Prior to visiting two field research stations and staying overnight at one, six members of Eco-Alianza’s Board of Directors and Advisory Board, along with President/CEO Hugo Quintero, received tours of the UC Davis campus and participated in exploratory meetings to discuss the future of the Sister Reserve partnership. In all, 22 representatives of UC Davis were involved in the itinerary and meetings, including the Dean and Assistant Dean, and Directors and Managers of several Reserves and Field Stations.

Photos courtesy of Catharine Cooper
Photo to the right: An example of the housing provided at the Bodega Bay field station.

Several presentations brought the Eco-Alianza and UC Davis groups together, including those highlighting the breadth and depth of UC Davis and Eco-Alianza programs, and those detailing UC Reserves, field stations, and other relevant models. These were followed by detailed brainstorming and planning sessions, whiteboarding, and scoping of the potential Loreto Field Station. Next came two days of explorations and introductions to the Bodega Marine Reserve and Laboratory (including the Marine Lab housing and dining hall) and the Point Reyes Reserve and Field Station.

Hugo again expressed gratitude not just for this trip, but for the overall Sister Reserve concept. “We are grateful to the UCNRS and faculty at UC Davis for taking the lead with this new partnership, and our team looks forward to planning the next steps for the research field station in Loreto. Our goal is to create a strong alliance with our friends on both sides of the border, with the long-term objective of increasiing knowledge and building protective networks for wildlife that know no borders.”

Later in the month, the Sister Reserve relationship had its first trial run, as Professor Nicholas Pinter, Associate Director of the UC Davis Center for Watershed Sciences, visited Loreto with a student to begin a geological research project he had previously planned. He said that this “scouting trip,” to be followed by at least eight additional trips, yielded “a gold mine of discoveries right off the bat.”

Hugo pointed out that this initial research effort gave Eco-Alianza a good opportunity to hone the “concierge services that our staff will be able to provide to support professors and researchers, calling on our strong relationships and formal agreements with the Marine Park, the municipality, local universities, and service providers.” He also pointed out the economic benefits that even a small research project provides for Loreto – visitors hiring boats, staying in hotels, eating in restaurants, and spreading good word of mouth to other researchers and tourists. Ultimately, the international scientific spotlight resulting from dozens of research projects will enhance Loreto’s reputation as a natural resource hotspot well worthy of conservation protection.

“This is just the very beginning,” emphasized Linda Kinninger, Eco-Alianza Treasurer and co-founder. “This hallmark accomplishment will positively impact Eco-Alianza and Loreto’s natural, cultural and educational environment for decades to come.” 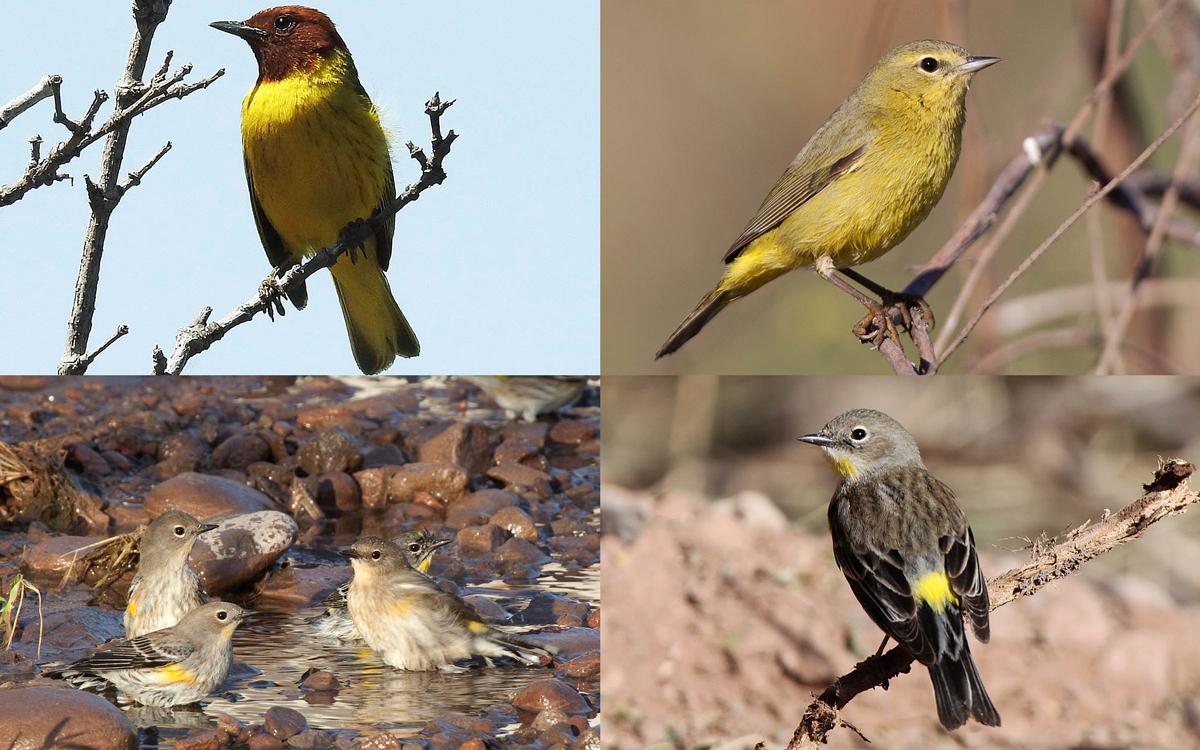 Photos courtesy of Tom Haglund/BCS Birds
Photos from top left, clockwise:
Yellow Warbler (Dendroica petechia). The reddish brown head is only seen on ones that are living in and around Mangroves.
Orange-crowned Warbler (Vermivora celata). That crown is very difficult to see (like impossible in most situations).
Yellow-rumped Warbler (Dendroica coronata). Yellow rump is quite prominent.
Yellow-rumped Warblers bathing in a wee pond.

Here come the warblers. Most of them have been away, far away, for months and are  now returning to their wintering range. Just a few are showing up here right now, but  many more will come before too long. There are some 52 species of warbler that breed north of Mexico, most of them migrate back south in the fall to winter in Latin America. This is an important reason to drink “shade grown coffee” as that farming practice spares warblers much winter habitat degradation.

The four species of warblers herein are the commonest of our local wintering warblers,  snow birds, if you will. These guys are feather-clad bits of life no bigger than the  average human thumb that routinely perform flying feats almost beyond imagining. The Orange-crowned Warbler breeds from the northern tip of Alaska to the east coast of  Canada and no farther south than the northern part of the Great Lakes area.

Members of all four species may have flown as much as 6,000 kilometers to reach us  here, where we delight in seeing and hearing them for several months each year. They  are not so easy to see, though. While there may be lots of them in the area, they are  shy and almost never sit still for more than a second or two at a time. They flit through  heavy cover at a furious pace seeking bugs, drips of nectar, and small fruits.

Warblers come in a rainbow of colors in other parts of their range, but our visitors tend  to have yellow accents in their plumage and little else, color-wise. An exception to this is a population of Yellow Warbler that is resident to areas with mangroves and doesn’t  migrate. It has faint reddish brown markings on the breast, as do all Yellow Warblers,  and a completely reddish brown head. It is not yet even considered a subspecies, but  many think it will gain that and eventually maybe full species status. 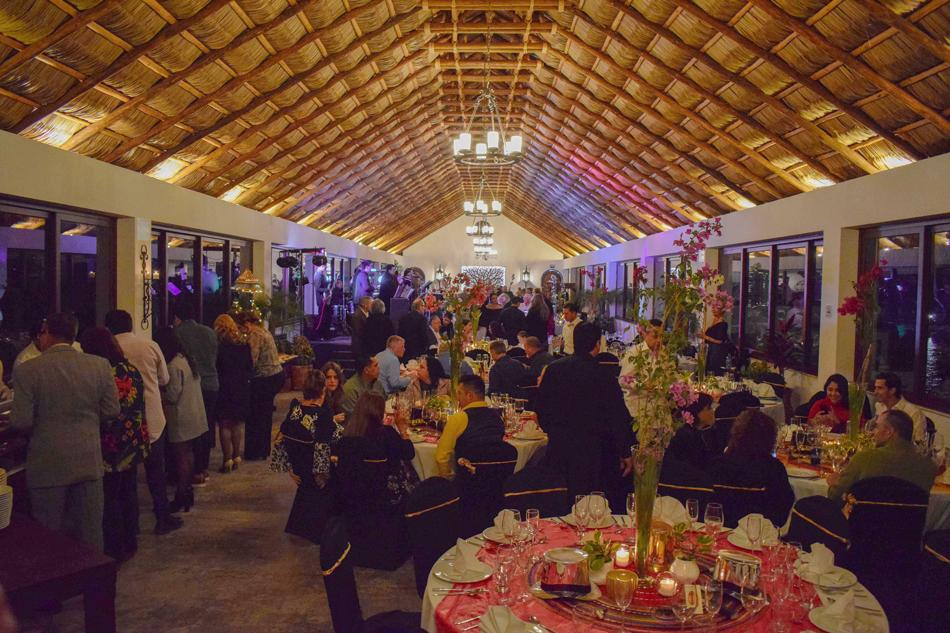 We hope to celebrate with you again this year – Eco-Alianza’s 12th Anniversary GALA on November 16, at the elegant Hotel La Misión 5th floor Banquet Room!

Or, if you wish to reserve in person, please visit Eco-Alianza’s headquarters, the Community Center for the Environment (CenCoMA) in downtown Loreto. For questions, please contact Maria Quintero maria.quintero@ecoalianzaloreto.net