“Our One Ocean” Event To Celebrate Blue Whales and Our Sister Park/Sister City, June 1

Eco-Alianza’s CenCoMA headquarters will host a unique event Friday, June 1, from 5 to 7 p.m. as part of our Visiting Scientist series and in celebration of Ventura’s Channel Islands National Park being our official “Sister Park.”

World-renowned blue whale researcher Dr. Diane Gendron will present information and slides (in Spanish) from some of the dozens of blue whale research projects in which she has been involved in the Gulf of California, and specifically in the Bay of Loreto National Park. Diane has researched blue whales for more than two decades in the Gulf of California, and directs marine mammal research for the National Polytechnic Institute’s (IPN’s) Interdisciplinary Center of Marine Sciences (CICIMAR) in La Paz.

Among her many research projects, Diane has studied blue whale migration — noteworthy because many of the same blue whales who rear their young here in Loreto swim nearby or through our Sister Park, the Channel Islands National Park, offshore of our Sister City, Ventura, CA.

Prior to Diane’s blue whale presentation, the June 1 event will include brief comments by Caryl Cantrell (in English and translated into Spanish), who co-chairs Ventura’s Sister City Committee. Caryl will comment on Ventura’s recent bout with devastating fires and landslides, as well as the ongoing recovery efforts.

After Caryl’s comments, we will screen the 20-minute film Treasure in the Sea, a profile of the Channel Islands National Park narrated by Kevin Costner (in English with Spanish subtitles). Then Diane Gendron will talk about ecosystem needs for blue whales all along their migration route, and will share other critical information for protecting blue whales here in the Gulf of California. Dr. Gendron’s presentation is expected to last 45 minutes to an hour, with some time for questions and answers.

This “Our One Ocean” event is free and open to the public. No tickets are required, but seating is limited. Soft drinks and light refreshments will be served, donated by Loreto’s Sister City Committee.

For more information on Dr. Diane Gendron and her research in Loreto, click on the links below:

Description of current work in Bay of Loreto National Park, including link to most recent project report:
https://www.rufford.org/projects/diane_gendron_0

Description of her work on National Geographic’s research vessel:
https://blog.nationalgeographic.org/2016/01/14/saving-baja-blue-whales-for-generations-to-come/

As of May 1, with nearly five weeks left to collect recyclables, this year’s Recyclathon participants already had exceeded the record total for the four previous years of the contest. Nearly eight tons of waste plastics, cardboard, glass and paper were collected during March and April, and logged in at Eco-Ambiental BCS at Kilometer 3 on the Carretera. The 13 four-person teams will continue competing until June 2. Several also have said that they will continue their activities beyond the end of the Recyclathon competition.

On Friday, June 8 (World Oceans Day), results of the Fifth Annual Recyclathon will be announced during a celebration and reception at Eco-Alianza’s CenCoMA headquarters. During the 5 p.m. event (free and open to the public), Eco-Alianza’s environmental education director, Edna Peralta, will give a brief talk about the importance of recycling and how plastic affects our environment, human health, and marine ecosystems.

Recyclathon teams are competing for prizes donated by sponsors of the event, Wild Loreto and Loreto Coastal Expeditions. Prizes include trips on the Glass Bottom Boat, catamaran trips, and more. They will be awarded to the teams turning in the highest cumulative point value of recyclables before June 2. A kilogram of plastic earns 10 points; paper, cardboard, and glass earn one point per kilogram.

In addition to raising awareness about recycling, Edna Peralta said, this three-month event benefits the environment by pulling toxic plastics out of the waste stream and ultimately keeping them from washing into the Bay of Loreto National Park. Towards that same end, Eco-Alianza is collaborating with Loreto Pueblo Mágico and the marine park with weekly beach clean-ups combined with bird observation classes, through mid-June. For more information or to register, watch Eco-Alianza’s Facebook page or email edna.peralta@ecoalianzaloreto.net . 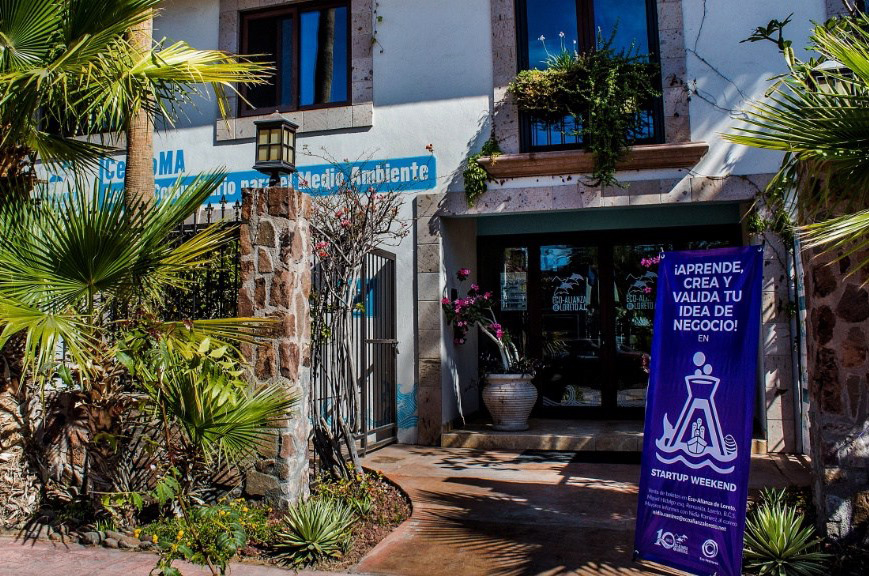 More than 30 participants from Baja California Sur and Baja California spent April 26-28 in Loreto, working with local and regional leaders to hone and test their business ideas. Facilitators said the weekend was unquestionably a success, especially considering it was a first for Loreto.

This event was part of encouraging an entrepreneurial culture in Loreto, said Eco-Alianza Executive President Hugo Quintero. It goes hand-in-hand with our Eco-Ventures business incubator program, aimed at supporting sustainable businesses and livelihoods as alternatives or additions to traditional fishing or non-ecological businesses. 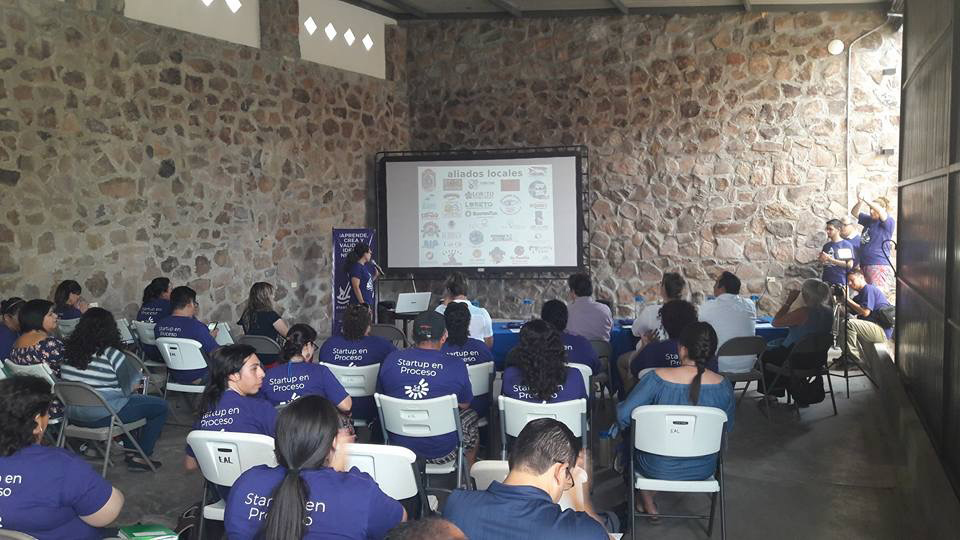 If you enjoyed the link in last month’s Soundings, showing the Bald Eagle Nest LiveCam from Channel Islands National Park’s Santa Cruz Island, you are in for a treat. On April 30 and May 1, Peregrine Falcon chicks hatched on the park’s Anacapa Island. The nest site outside a small cave has been used for many years, at least since 2013. It’s hard to imagine that soon these fluffy chicks will be feathered and flying faster than any other animal on earth. Enjoy the LiveCam from our Sister Park! 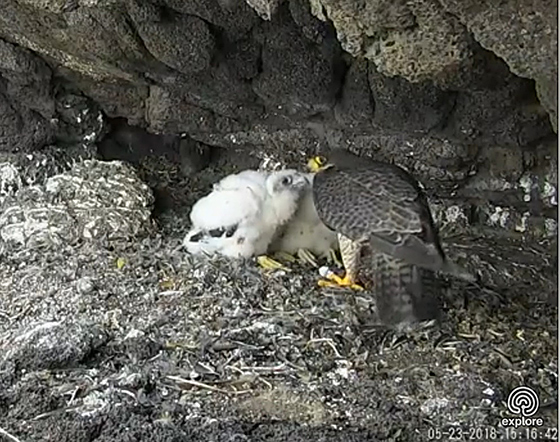 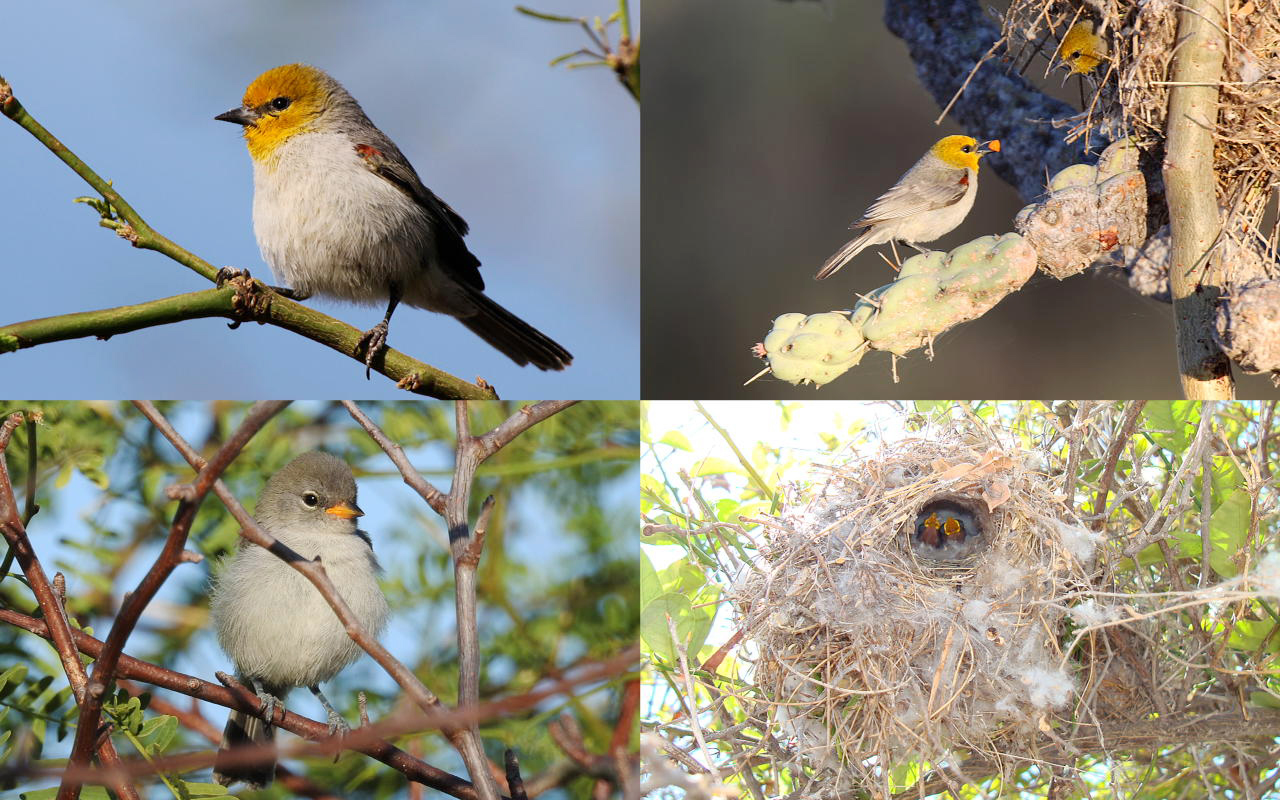 Photos courtesy of Tom Haglund/BCS Birds
Photos from top left, clockwise:
Adult Verdin (Auriparus flaviceps)
Pair bonding at entrance to chosen nest.
Two hungry chicks in a sea of fluff inside this coziest of bird nests.
Fledged juvenile, able to fly but still attended by parent(s) and returning to the nest for sleep.

It’s very common among passerines (perching birds) for the female to select her mate from among the available males based on plumage, dances, songs, or skills that cue her instincts in assessing a male’s suitability as a parent. Male Cardinals and other brightly colored birds are just simply dazzling. Male Hummingbirds try to show an ability to guarantee access to food sources. Male Orioles and Verdins demonstrate nest-building skills.

The Verdin, not much bigger than most human thumbs, is the champ around here at this last strategy. He constructs nests of a variety of materials to offer to interested females in hopes of being selected as a mate. Leaving as little as possible to chance, he will construct several nests, using twigs (many with thorns), grasses, cotton, feathers, and other fibrous items. Each nest is a marvel of clever construction and usually about the size of a softball. There is much competition and thievery amongst the males for these nesting materials. He creates a hollow orb with an entrance at the bottom or low on the side facing away from the tree or bush where he is building. The orb is completely enclosed except for this very small entrance hole. This closed-off appearance and the fact that the nest is most likely out near the end of a flimsy branch combine for pretty effective predator control.

Inside the nest, a short tunnel leads to the brood chamber which will be further lined with down, cotton, and other soft material by the female after she has made her choice. She will then lay several light bluish-green eggs with red splotches and begin incubating them. In 10 days chicks will hatch and the male and female will both feed them in the nest for another 21 days, unless the female decides to go and lay some more eggs in another nest and begin again. If she does, the male will continue parenting the first brood while also feeding the incubating female who sits on the new batch. Exhausting work, no wonder they only live 3 to 5 years.

The certification in monitoring riparian fishery activities will be useful for Eco-Alianza’s Coastal and Marine Conservation projects, as staffers work closely with local fishing cooperatives and the Bay of Loreto National Park to manage local fisheries and encourage sustainable fishing practices.

Eco-Alianza is interested in interviewing bilingual (Spanish and English) marine biologists for a position in Loreto. For more information, contact: 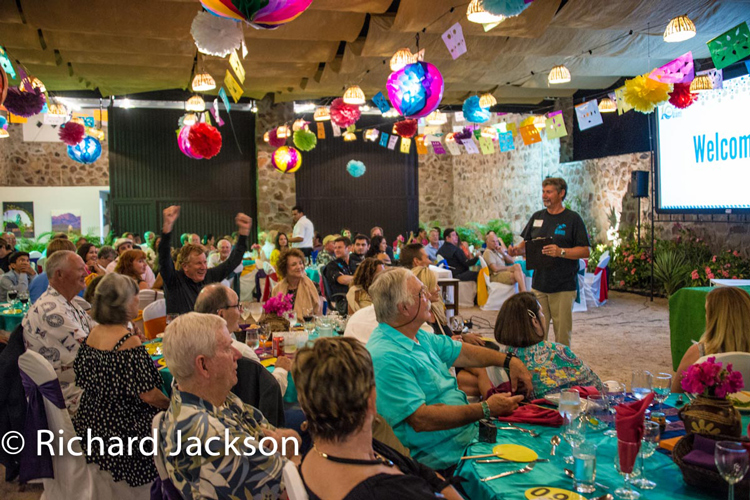 Eco-Alianza’s 11th Anniversary Gala is slated for Friday, November 16. Tickets are not yet on sale, but please mark your calendars!
See you there!