If you have ever heard anyone say that “summer is the slow time” in Loreto, this month’s issue of Soundings offers ample proof that they are dead wrong.

• An international agreement took a giant leap forward,
• The Bay of Loreto National Park celebrated 20 years of conservation,
• Loreto’s citizens rolled up their sleeves for recycling and water conservation.

We are proud of Eco-Alianza’s role in all these accomplishments, and ever grateful for your support.

Many Loreto restaurants and businesses close for part of September, but that’s no indicator of the level of activity taking place. To the contrary, a more accurate indicator may be the huge new highway welcome signs or the two new bridges being built between the airport and Loreto Bay. Loreto is gearing up for another busy season, and so is Eco-Alianza! Read all about it in this issue of Soundings. 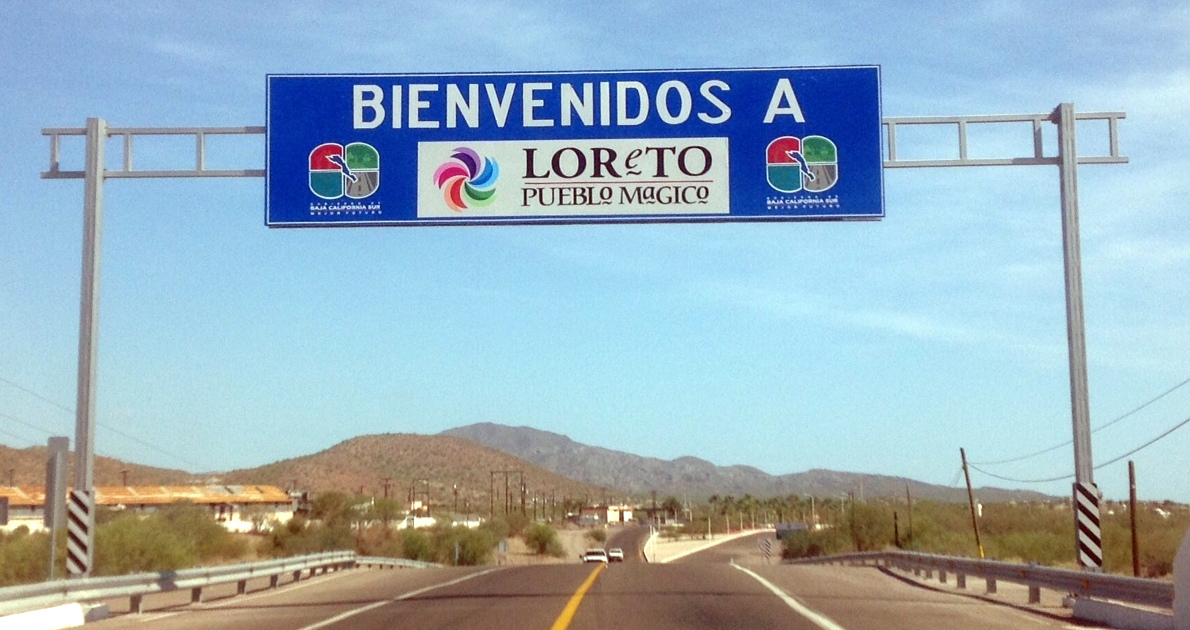 For many visitors to Loreto, as well as residents, taking a dip in the ocean offers a refreshing respite, especially in hot weather. But ensuring that accurate information is available on the safety of the water is a task that Eco-Alianza has embraced increasingly over the last several years. No one wants a quick dip in the ocean to result in an unexpected illness.

In 2014, the Loreto COASTKEEPER® initiative became fully operational with the help of Eco-Alianza’s advisory scientist, Chuck Mitchell, and the efforts of Héctor Trinidad, Conservation Director, and Alex Estrada, Program Associate. The water quality monitoring program of the beaches in and around Loreto was established to better inform the public about clean, swimmable beaches.

Water samples are taken weekly from Easter and throughout the summer. Outside this time, the monitoring is performed every two weeks. Samples are taken at 12 sites (beaches mostly) geographically separated and are processed in Eco-Alianza’s Water Quality laboratory, and the results are posted on the Facebook pages of Loreto Coastkeeper and Eco-Alianza. You can also download the “Swim Guide” application for smartphones and tablets. Reports are also presented to various authorities. This initiative connects Eco-Alianza and Loreto Coastkeeper with 222 members worldwide, as well as with the Baja California Water Coalition. The Loreto Coastkeeper also acts as a mentor for the new Waterkeeper in Santa Rosalia.

Although water quality is always high at most of the beaches of Loreto and receives the green badge indicating suitable for swimming, levels of enterococci in several beaches in the area are sometimes above the maximum permissible limit for safe swimming (200 most probable number (MPN) “after storm runoff”. Storm water runoff, sewers overflowing, leaking septic pipes, or other sources often result in contaminated waters for up to a week or more. The limit for enterococcal bacteriological contamination adopted by the Federal Commission for the Protection against Sanitary Risk is 200 MNP to define whether a beach is suitable or not for recreational swimming.

Eco-Alianza’s Visiting Scientist series will continue on October 7 with a free presentation by the Director of L.A.’s famous Griffith Observatory. Dr. E.C. Krupp will present “Rupestre Art, Constellations, and Planets” at Eco-Alianza’s CenCoMA headquarters, in English, at 6:00 p.m.

Since 1973, Dr. Krupp has been recognized internationally for his work on ancient, prehistoric, and traditional astronomy and on the relationship between astronomy and culture. He is  a  pioneer  in  the  field of archaeoastronomy and is the author  and editor of five books on this subject, having personally visited, studied, and  photographed  more  than 2100  ancient, historic, and prehistoric  sites throughout the world, including Baja California, México.

Dr. Krupp has made 11 trips to Baja since 1981, three by mule. He also has written hundreds of articles for the general reader on astronomy and culture, dozens of research papers, and four children’s books on astronomy. He has received several prestigious awards from the American Institute of Physics, the Astronomical Society of the Pacific, Pomona College, and other astronomical and civic organizations. 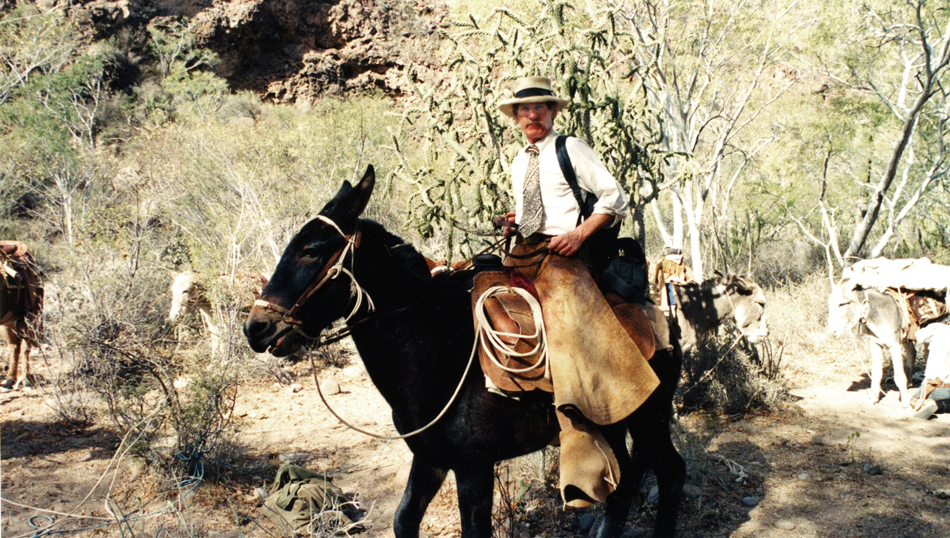 He began his Griffith Observatory career as a part-time planetarium lecturer in 1970 and he’s been its Director and an agent of public astronomy since 1974. He led the Observatory’s $93-million restoration, renovation and expansion, a project he conceived and shepherded through design, fundraising, construction, reactivation, and return to space after a five-year close. 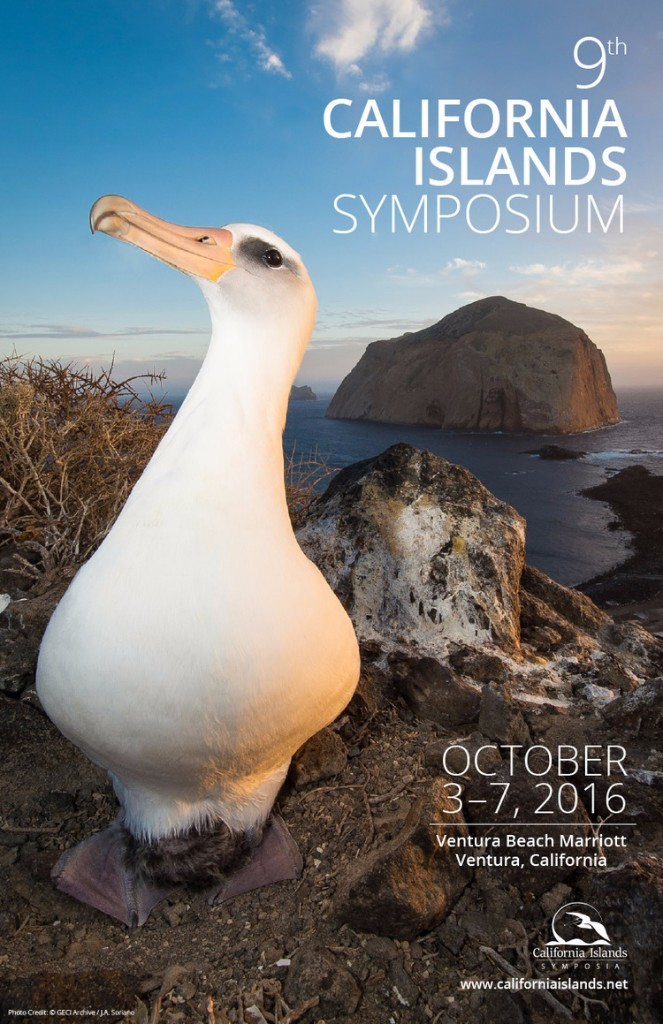 Considering the recently-approved Sister Parks relationship between the Bay of Loreto National Park (PNBL) and the Channel Islands National Park in Ventura, CA, Eco-Alianza President Hugo Quintero and Conservation Director Héctor Trinidad should feel right at home when they attend the upcoming California Islands Symposium in Ventura. Eco-Alianza donors also have agreed to sponsor attendance and travel by PNBL managers if they can arrange their schedules.

The symposia have been organized sporadically since 1965 to share research and conservation strategy and to address common challenges, goals, and solutions throughout the Baja and alta California islands. The five days of speakers, presentations, gatherings, and outings are aimed at scientists, resource managers, educators, and land managers, but registration is open. For more information:
http://www.californiaislands.net/symposium/

Students at this summer’s Eco-Alianza fish identification class received a bonus trip to Santispac Beach at Bahía Concepción, where they took part in an important conservation project to support fish population recovery (and had fun as they did it).

During the free week-long course taught by Eco-Alianza Education Coordinator Edna Peralta, edna.peralta@ecoalianzaloreto.net up to 25 students participated in games, painting, activities, and watched documentary films to learn about the wide variety of fish in the Gulf of California.

As a final activity, the last week of August, they formed a bucket brigade on Santispac Beach to release 15,000 young Totoaba into the sparkling waters. The aquaculture effort was part of an ongoing project by Earth Ocean Farms in La Paz to repopulate this endangered fish (Totoaba macdonaldi) in the waters of the Gulf of California.

The swim bladders of Totoaba are highly coveted in China, making the fish very valuable and subject to poaching where they are endemic, in the northern Gulf of California. Fishing for them there is now illegal, because it also has resulted in “bycatch” of the almost-extinct marine mammal, the Vaquita. Establishing Totoaba populations further south may result in a sustainable fishery through this multi-sector collaboration including SEMARNAT, CONAPESCA, PROFEPA, local businesses, the office of the Governor of the State of Baja California Sur and the Earth Ocean Farms company.

As we had hoped, the “Sister Parks” relationship between the Bay of Loreto National Park (PNBL) in México and the Channel Islands National Park (CINP) in Ventura, CA is now official. The agreement was announced at the 10-day World Congress of Nature, convened every four years by the International Union for Conservation of Nature (IUCN). The Congress, titled “Planet at the Crossroads,” was held in Hawai’i from September 1-10.

The new Sister Park agreement was among four announced by Alejandro del Mazo Maza, Commissioner of Mexico’s National Commission of Protected Natural Areas (CONANP) and Jon Jarvis, U.S. National Park Service Director. They said “The main objective of these alliances is the exchange of experiences for effective management of the Protected Natural Areas, including topics such as: monitoring, management, social involvement, and tourism, among others.”

As reported in last month’s Soundings, Eco-Alianza has been instrumental in forging this agreement for nearly three years. On its signing, PNBL Director Alejandro González Leija said he will immediately “make contact with Russell (Galipeau, CINP Park Superintendent) to devise a work plan between the Parks and include some special issues to widen the collaborative activities.”

The announcement of the Sister Parks relationship at the IUCN World Congress of Nature seems particularly appropriate. The gathering is held every four years and brings together leaders and decision-makers from 161 governments, over 1,000 NGOs, indigenous peoples, businesses, and academics, with the aim of uniting and prioritizing conservation efforts and promoting solutions to global challenges.

Volunteer Translators Needed for Soundings
and other Publications

You may already be aware that most Eco-Alianza publications are published in both English and Spanish. With the recent increase in the quantity and frequency of our publications, we find ourselves in need of more volunteer services, especially if you happen to be bilingual in English and Spanish. Although we do have deadlines, this is not a high-pressure gig, can be done on your own computer, and we have team members who will provide a second reading for accuracy. Interested in helping out?
Contact: mark.hufford@ecoalianzaloreto.net

Get your tickets NOW  for the 9th Anniversary Dinner Gala! 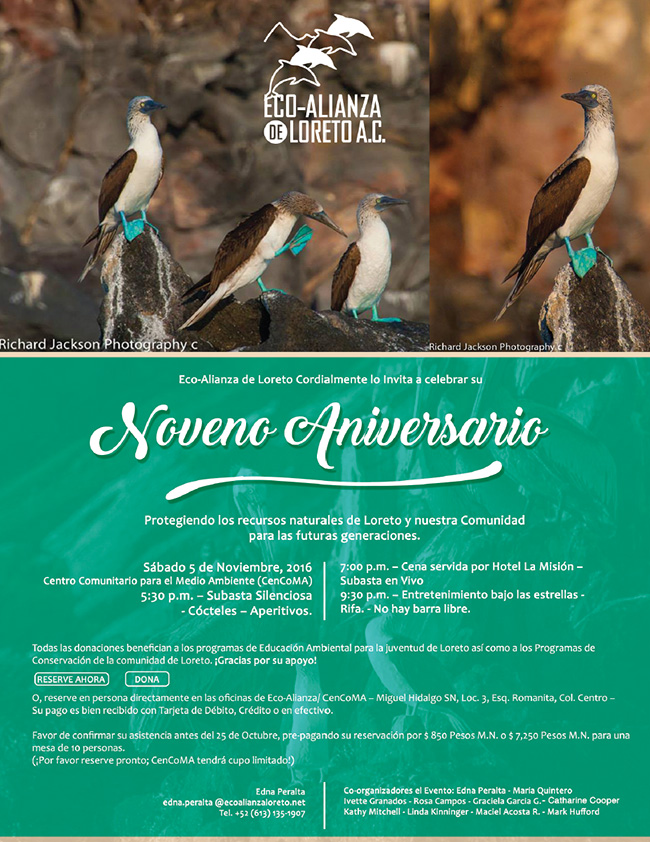 Tickets are now on sale for Eco-Alianza’s 9th Anniversary dinner (November 5), and are at a premium given our more intimate venue. As announced earlier, this year’s dinner will be served al fresco in the newly covered courtyard and garden at Eco-Alianza. Silent auction and cocktails will be inside, along with self-guided tour of our spruced-up CenCoMA headquarters. Dinner will be catered by La Misión, with live auction and entertainment under the stars. Reservations now accepted by clicking below. Please don’t wait, as space is strictly limited.
https://ecoalianzaloreto.org/event/eco-alianzas-9th-anniversary-celebration/

And if you can support Eco-Alianza by donating an amazing, auction-able item, service, or unique experience, please email edna.peralta@ecoalianzaloreto.net. All donations are U.S. tax-deductible.

For more information, questions & requests our email address is:
ecoalianzaloreto@gmail.com

Copyright ©  2016 Eco-Alianza de Loreto, A.C. All rights reserved.
You are receiving this email because you have subscribed to our annual mailing list.