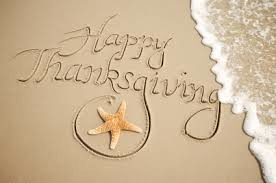 To celebrate American Thanksgiving, we at Eco-Alianza de Loreto, A.C. give thanks for this awe-inspiring desert and ocean paradise that continues to amaze us every day. The natural and cultural wonders here provide endless delight and we are so grateful for you and the other supporters who help Eco-Alianza meet its multi-faceted mission. We certainly couldn’t do it without you. This month we’d especially like to express heartfelt thanks for the success of our Ninth Anniversary celebration, which broke records as a fundraiser, but also was a smashing hit as a fun-raiser, right at our own CenCoMA headquarters. Our thanks to you, and Happy Thanksgiving!

It’s hard to believe that nine years has passed so quickly, but seeing our community and supporters celebrating Eco-Alianza’s successes makes it all worthwhile. Early this month, a sold-out crowd of more than 150 talked, laughed, dined, danced and celebrated the night away in the spruced-up CenCoMA building and its newly-renovated covered courtyard. 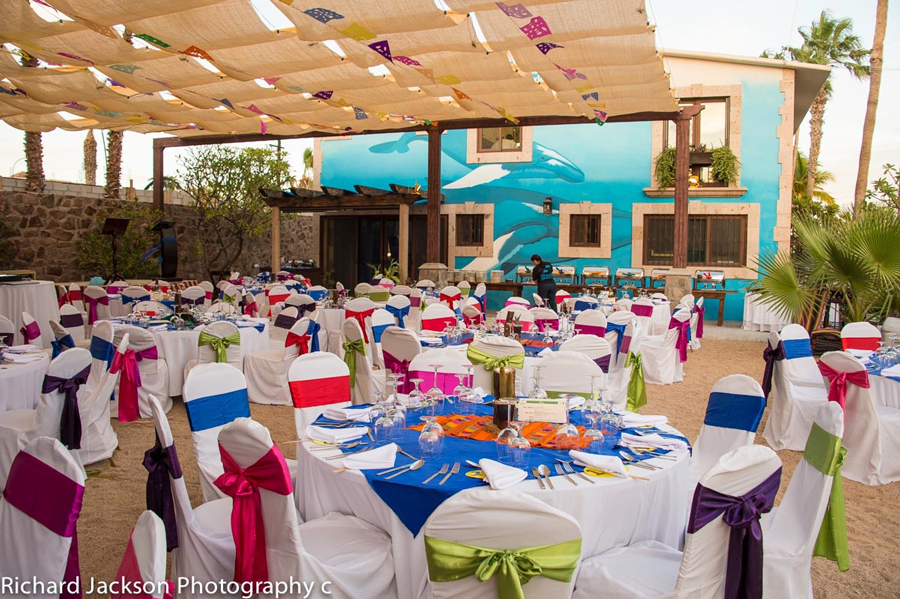 Cocktails and elegant passed appetizers set a celebratory mood for a silent auction in the upstairs auditorium. Attendees also took part in an impromptu open house, peeking into offices, the water testing laboratory, the environmental education room, and every nook and cranny. With plenty of time for socializing, participants bid enthusiastically on a wide variety of donated items and experiences, as well as an eclectic mix of consignment items provided by Loreto vendors. Many attendees were newly-returned to Loreto, so squeals of delight punctuated the festivity as part-year residents greeted each other with hugs.

The silent auction was followed by a sumptuous feast, catered by and served at an extremely generous price by the Misión Hotel (who also decorated the courtyard, catered and served the appetizers). They have underwritten this event for six years now, and are largely responsible for its success. 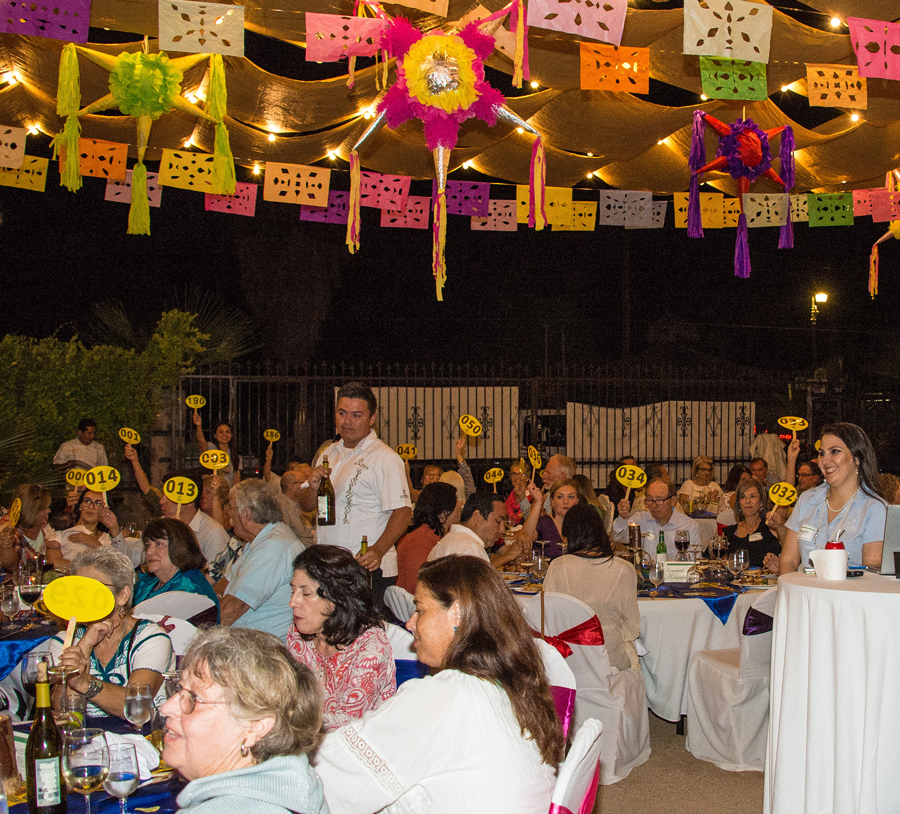 Bidding at the live auction during dinner nearly doubled our results from last year, not even including the “Fund-a-need” solicitation, which also set records. Earmarked donations during “Fund-a-need” provided four one-month sponsorships of our Loreto Coastkeeper program, 30 sponsorships for children participating in environmental education trips to the islands and mountains, and a hearty kick-off for our capital campaign for the sustainable economic development center. Executive President Hugo Quintero talked about the need and plans for the center, and will expound on details in the months to come. 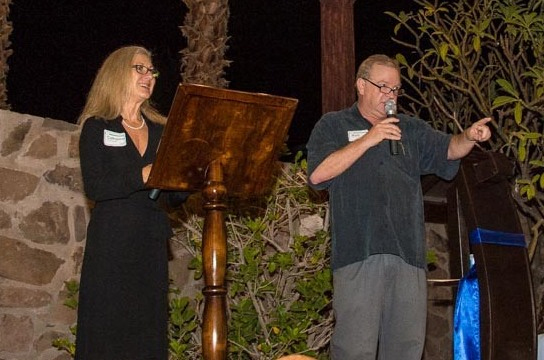 A pause during the live auction established a new element for the anniversary event ~ an environmental stewardship award that will be presented annually (see separate article below). The evening was capped with dancing to The Electric Lady Band, thanks to entertainment sponsorship by Linda and Tony Kinninger.

All in all, the event set a high bar for our 10th Anniversary next year, to be held on November 18 ~ mark your calendars now (the date was recently revised, and is now firm).

Sometimes words seem insufficient ~ but nonetheless, thank you to everyone who participated in the Ninth Anniversary Celebration!

Thank you to all donors and sponsors of our Ninth Anniversary Celebration:

We are grateful to our Patrons and Underwriters:

We are especially grateful for the support and generosity of Scott Serven, owner of Hotel La Mision, and the hotel’s fine staff, expertly led by General Manager María Gámez.

Thank you ~ please patronize our business supporters and contributing artists:

Thank you to our
“Fund-a-need” benefactors

Unfortunately, in listing our supporters it is easy to accidentally omit someone, or someone’s partner, depending on whose bidder number was used. Please know that we deeply appreciate the support of every donor and participant, and let us know if you were inadvertently omitted from this list. Thank you also to the staff of Eco-Alianza who put in many extra hours to make the event run smoothly. We welcome your suggestions for improvement!!

Thanks, also, to everyone who purchased items in the silent and live auctions. See you November 18, 2017! 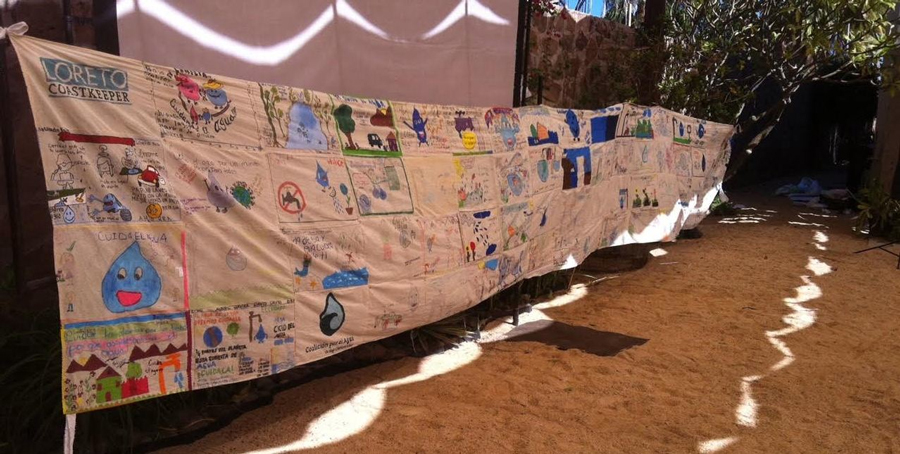 Earlier this month, the Water Coalition of Baja California Sur initiated a statewide contest encouraging children to express their appreciation for water. As part of a larger awareness campaign, the group includes the Waterkeeper organizations in Santa Rosalia, Magdalena Bay, La Paz, Cabo Pulmo, and Loreto.

As the Loreto Coastkeeper, Eco-Alianza staff worked with students from 4th, 5th, and 6th grades at Juan Felipe Lagos Elementary School. After presentations and discussions about water and the importance of protecting and conserving it, students put their feelings into art, each creating a small cloth panel. Judges chose their 10 favorites for prizes and then all were sewn together into a long quilt and exhibited at locations in Loreto. Soon they will be joined with drawings from the other cities and exhibited in the state capital, La Paz.

Although Loreto doesn’t have its own television show, our Sister City of Ventura, CA embraces public access television.  Fiorella Calderoni, a member of Ventura’s Sister City Committee, and also Communications Coordinator of the Ventura Visitors and Convention Bureau, recently made a guest appearance on Our Ventura, a show featuring local events and information. 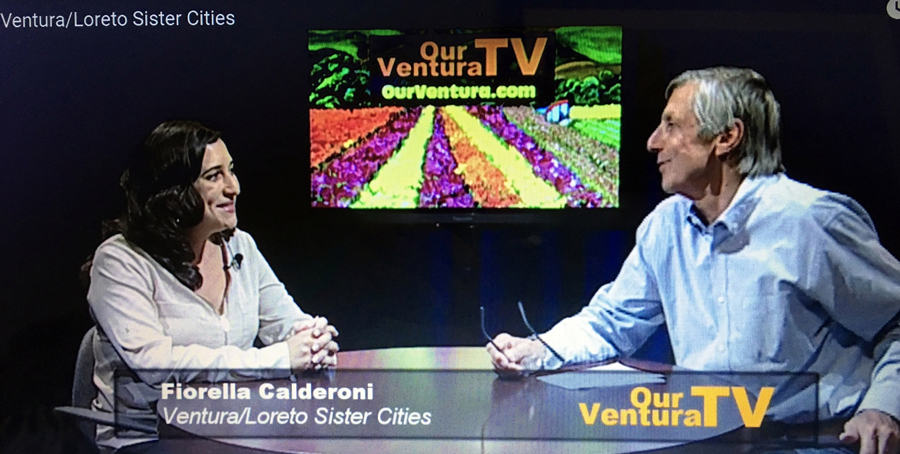 Here’s what she had to say:
http://ourventura.com/ventura-loreto-sister-cities

During a break in the action at the Ninth Anniversary gala, Executive President Hugo Quintero announced the creation of a new award, to be presented annually at Eco-Alianza’s anniversary dinner.

He said the staff wanted “to recognize some of the exceptional people across Baja California Sur who honor the same environmental and cultural values that we do,” and said that in ensuing years the award recipients will be chosen by Eco-Alianza’s Board of Directors. “But this year,” he said, “we get to choose,” after which he called to the stage Chuck Mitchell, science consultant and a member of Eco-Alianza’s advisory board, to present the award.

“In five decades of my professional life I have never encountered an environmental group that has been so effective at accomplishing its goals to the benefit of the community at large,” Mitchell said. “This is only accomplished with inspired leadership, and that rare combination of dedication, business sense, and environmental sensitivity . . . and it’s been so helpful that the recipients of our award today have been leaders of conservation and environmental efforts regionally and even internationally.”

Mitchell also said that it is fitting that the first recipients of this award be among Eco-Alianza’s founders, Tony and Linda Kinninger, who have provided the direction, inspiration, and support to make this vision a reality.” He pointed out that the Kinningers have also been patrons of the International Community Foundation, Grupo Tortuguero, Pro Peninsula, and Scripps Institution of Oceanography, to name a few. 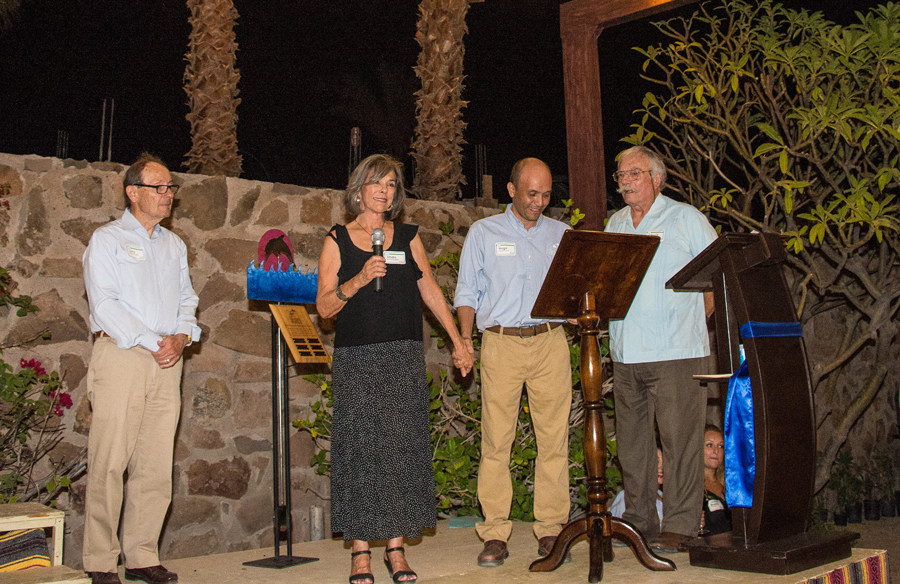 The award sculpture was crafted by Tim Yarbrough, and the plaque states: “Recognizing outstanding commitment to strengthening the conservation ethic in Baja California Sur, and to supporting cultural connections between a thriving community and a vibrant, pristine environment.” 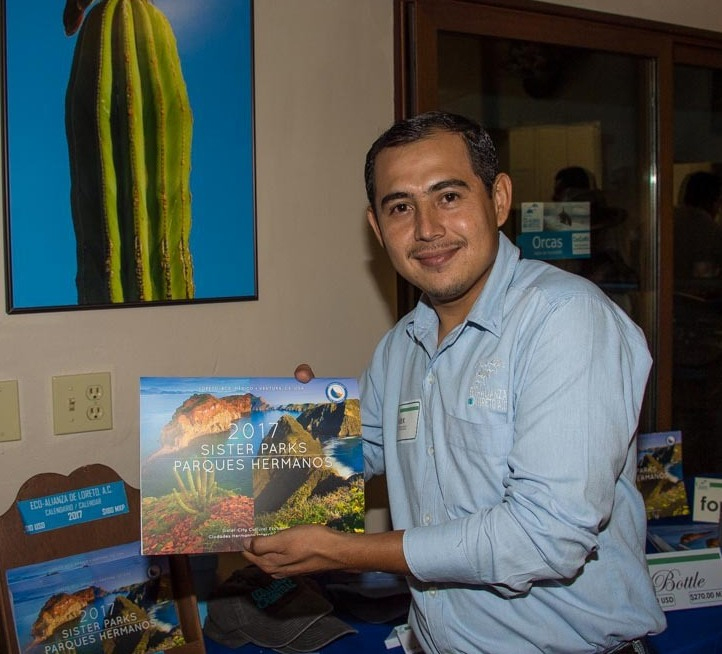 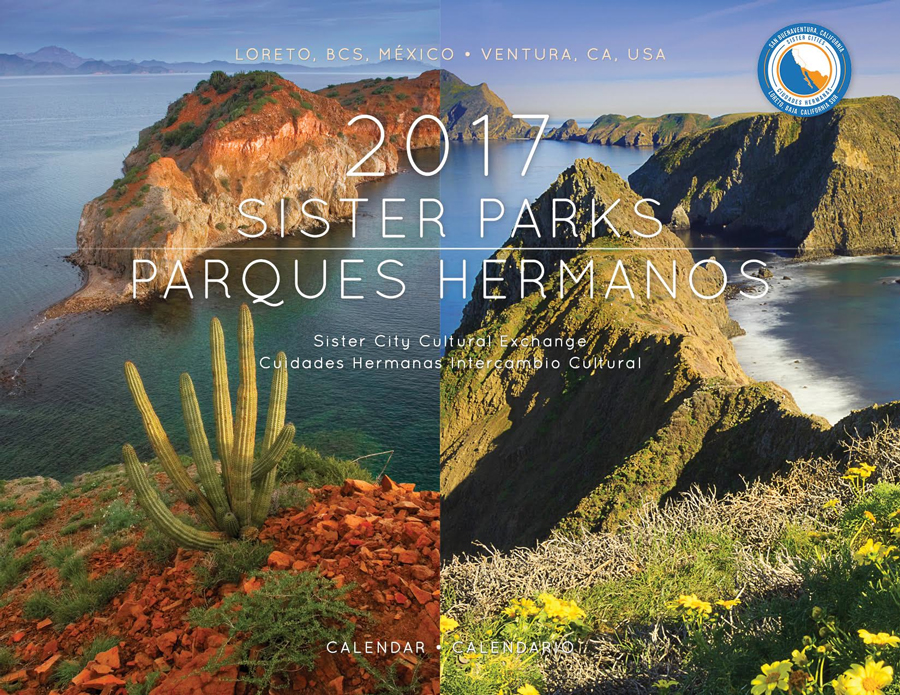 With the holiday season upon us, 2017 is right around the corner. Sister Parks 2017 calendars, featuring beautiful photography of Parque Nacional Bahía de Loreto and Channel Islands National Park, are now available.

The limited edition calendar is available at CenCoMA and at many stores around Loreto (see list on our website), at the Ventura Visitors Center, and by mail.

For more information on locations and ordering by mail:
https://ecoalianzaloreto.org/calendar/