Spring Cleaning All Around Us 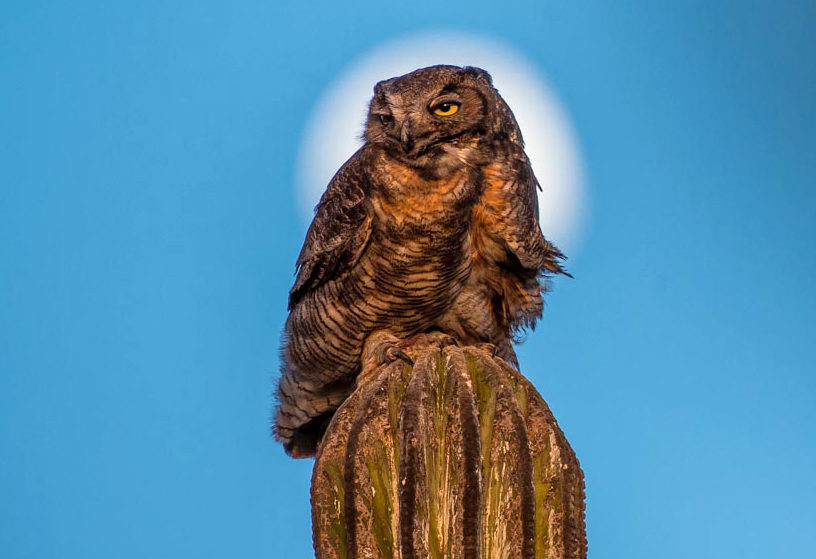 As the days continue to lengthen, this month’s Soundings explores a variety of springtime activities in Loreto. Everyone’s taking advantage of the extra hours of daylight, and relishing the cool nights as daytime temperatures increase. Last month’s “spring cleaning” inside our homes (culminating in the celebration of our Garage Sale and Raffle) seems to have led to a fervor of spring cleaning outside. Birds have been sprucing up their nests for spring hatchlings, and all around Loreto folks are cleaning up beaches and arroyos and neighborhoods, and teaming up with friends for this summer’s Recyclathon. Read all about it in this month’s Soundings !

At its founding nearly 10 years ago, Eco-Alianza set out to protect water quality and the natural wonders and surroundings of the Bay of Loreto National Park. We asked people to “Say No to Plastic Bags” back then, and we are reviving the notion as a celebration of World Environment Day on June 5 and World Ocean Day on June 8.

The oversized recycled, recyclable, reusable shopping bags shown above feature the logo of our partner (Bay of Loreto National Park) on one side, and two logos on the other side (Eco-Alianza’s 10th anniversary, and Loreto Coastkeeper).

Considerably wider than most reusable shopping bags, they easily hold 40 pounds of groceries or whatever you’d like to fill them with. And perhaps most importantly, their sale supports our Sister Cities/Sister Parks initiative that was confirmed by the presidents of México and the United States in October.

As an international project of the National Park Service, the Sister Parks program allows national parks in the United States to offer expertise and assistance to their approved Sister Parks in other countries. Channel Islands National Park excels at managing endangered species, improving fish stocks, and conserving biodiversity on the five islands within their Park. Funds raised with shopping bags and other efforts will support international exchange experiences for Park managers and biologists.

The bags are immediately available at El Gavilan and our CenCoMA headquarters, and will soon be available in other locations, as well.

A heartfelt thank you goes out to everyone who participated in the April 29 litter and trash cleanup of the arroyo at the north end of Loreto. More than 60 volunteers turned out to scour Arroyo La Candelaria, haul the trash out of the arroyo, and ultimately recycle a huge portion of it.

This year the foreign resident community and local Loretanos led the organization of this event, with the support and collaboration of many volunteers, local NGOs, personnel from the Parque Nacional Bahía de Loreto, and many local businesses, including trucks provided by the municipality of Loreto. 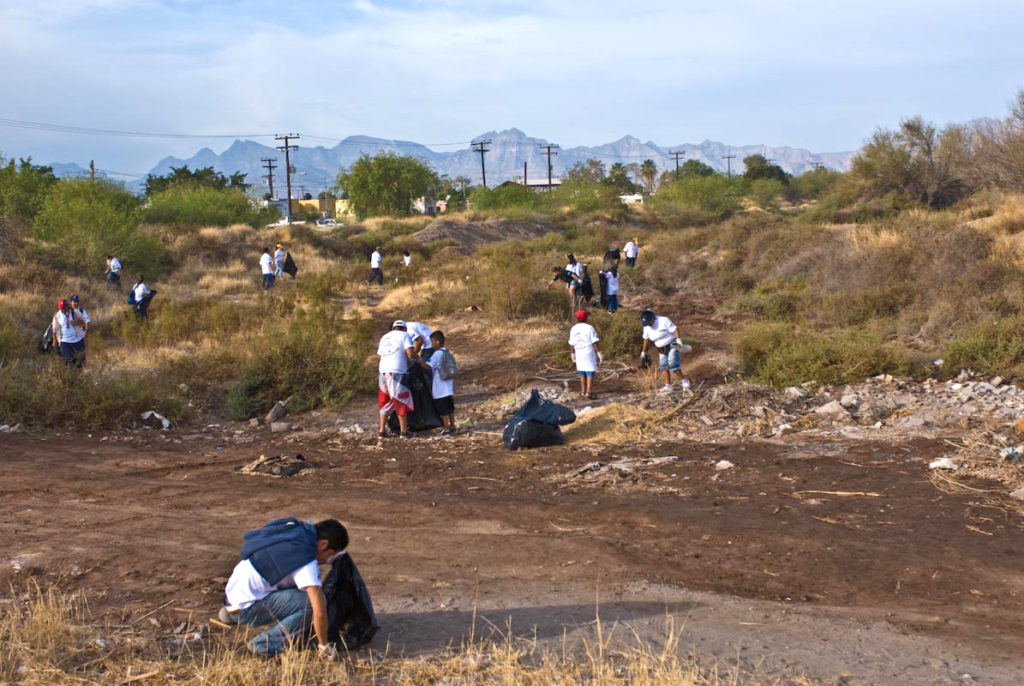 The arroyo got a good cleaning way back in 2010 and nearly every year since.

Anyone who has been in Loreto for the “rainy season” knows that trash in the arroyos means trash in the ocean (and the marine park), as these normally dry riverbeds swell with stormwater runoff, sometimes even overflowing their banks. Plants, rocks, and any and all debris are swept into the ocean in a torrent of muddy, pollution-packed bio-hazard. 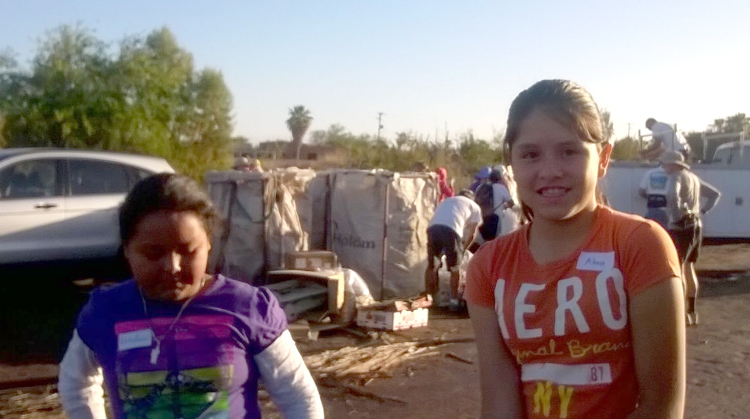 Education of young Loretanas may be a key to changing attitudes about littering. 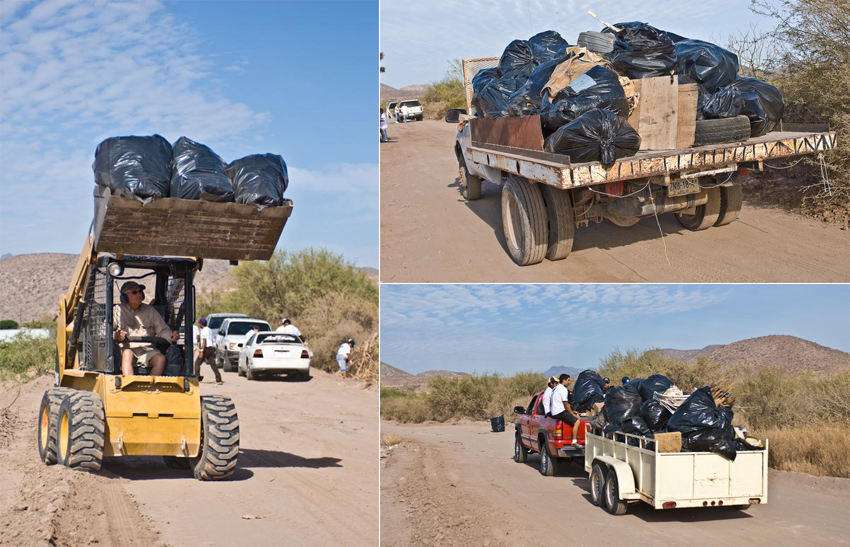 Photos from 2010 and 2012 indicate an ongoing litter problem, confirmed again this year.

Clearing trash and hazardous materials out of the arroyos has been an ongoing project since day one, says Eco-Alianza President and Founder Hugo Quintero. “It’s great to see so many citizens rolling up their sleeves and affirming their connection to a clean ocean,” Hugo says. “Looking back at pictures from our ongoing cleanups over the last 10 years, we realize that these core attitudes (of acceptable littering) still exist. Our actions now have evolved to engage government and people in recycling their littering, this year again, as part of earth day and other conservation celebrations, our Recycling Marathon (reciclaton) event has gain momentum, and most of teams registered also participate at the cleanout of the Candelaria Arroyo.” 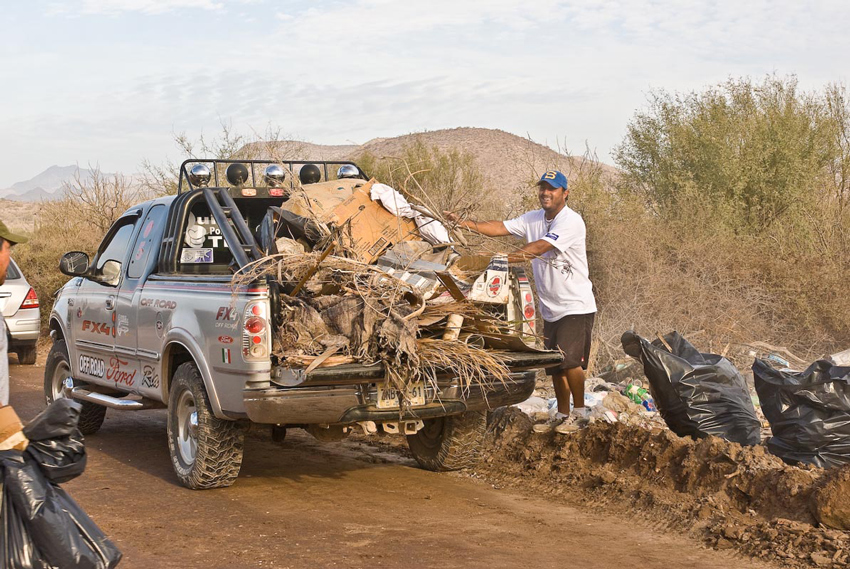 Hugo pointed out that Eco-Alianza’s commitment to environmental education is growing, not shrinking, because the best long-term solution is instilling conservation values in local children while they are young. “Not only will the children we teach refrain from littering, they will teach their parents and their siblings and their extended families.” 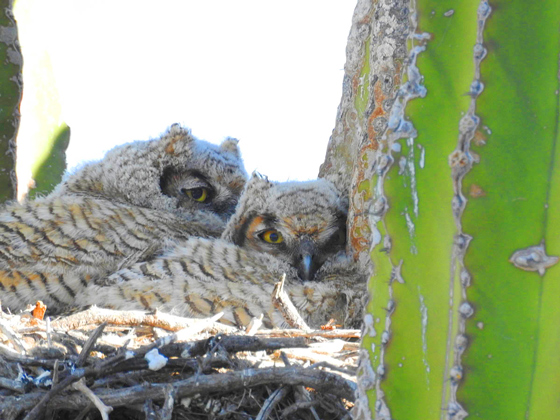 With this issue of Soundings we introduce “Nature Notes,” a monthly short feature detailing some of the wondrous, seasonal activities taking place around us.

Richard Jackson and I have been monitoring large nests in Cardón cactuses for several years now, and have located six active ones so far this year. This particular nest was occupied by Great Horned Owls in March, and these 2 chicks hatched about the first of April. The hatchlings stay in the nest for 35 – 45 days and will remain near it for some time afterward, under close watch and care by both parents. This nest has fledged birds successfully for several years now, and the broods have included Harris’s Hawks (twice) and Great Horned Owls (also twice).

Great Horned Owls are fairly common year-round over a very large range in North America. They eat vertebrate species, including rodents, birds, reptiles, and amphibians. They are monogamous and do not usually make their own nests; they often use nests made by other species. These can be either abandoned nests or simply usurped ones.

Trash We Don’t Want to See on Our Beaches 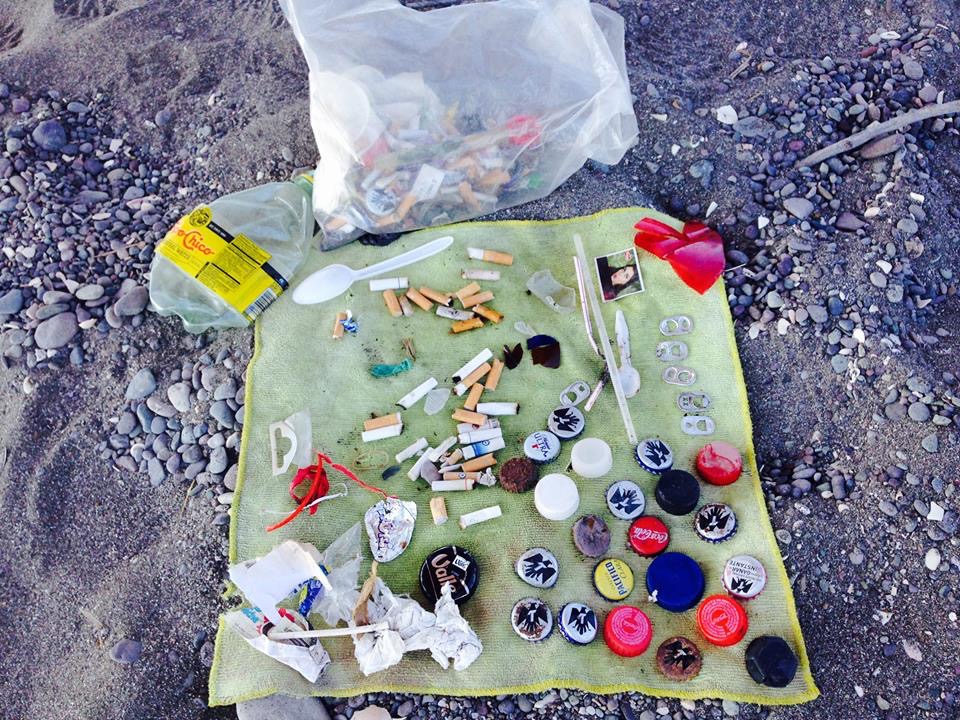 Screening the sand beneath the palapas yielded significant results. 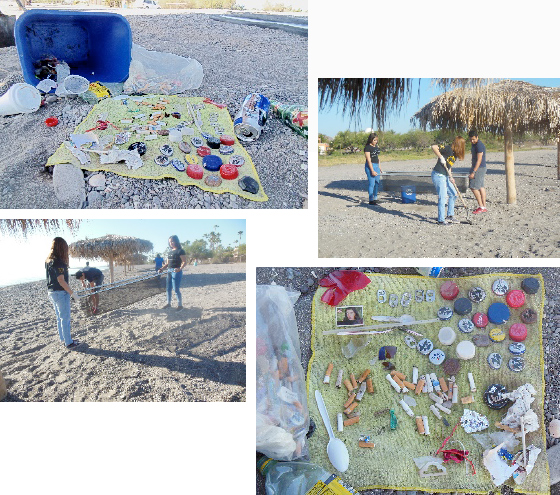 By Héctor Trinidad, Director of Marine and Coastal Conservation

We only believe what we see. Our general thinking is that, if we don’t see something, it is not causing a problem. And something most people don’t observe is sadly a reality on all the world’s beaches, including Loreto. It is the presence of small pieces of garbage, some as small as grains of sand – even microparticles that can only be seen through a microscope.

What do you think happens with this kind of waste in the environment? Having this kind of trash on beaches is an environmental and human health problem. Plastics or microplastics (less than 3 cm) that are found in streams, canyons, in the coastal zone (which includes the beaches and the marine environment) release toxic elements on the land and in the water. For example, cigarette butts release nicotine, tar, lead, arsenic and cyanide when they come into contact with water.

And on all of our beaches there are many cigarette butts – on the Malecon, la Negrita, and even the beaches on Isla Coronados. Recently, Loreto Coastkeeper has started cleaning this type of particles, which we will call mini-trash. Together with students of the CEB Jose Vasconcelos of Loreto, at La Negrita Beach, we performed experimental cleaning of this type of toxic waste. The method is very simple: with the use of a sieve and a shovel, we filtered the sand and collected bottle caps, can tabs, straws, bits of plastic, polystyrene, cigarette butts, and other debris. Look at the images. Plastic and contaminants are integrating into the food chain. There are scientific studies that prove that fish and other marine organisms, including plankton and birds, have plastic in their tissues.

What can we do? 1) Do not throw cigarette butts in the street, streams, beaches, etc. Place them in the trash. In fact, do not drop any kind of litter. (2) Recommend to people that they collect the trash generated on the beaches. (3) Be an example: leave the beach better than how we found it – carry a bag and pick up whatever we find.

Last year’s Recyclathon diverted nearly 24,000 kilos of recyclables from ending up in the landfill.

As it has over the last few years, Eco-Alianza’s summer recycling event is offering four-person teams the opportunity for comaraderie, conservation, and even competition for prizes – including trips to the islands of the marine park on the event’s sponsor – Loreto Coastal Expeditions’ glass bottom boat.

The competition has already begun, but it’s not too late to pick the name of a marine mammal and register your team name with Edna Peralta at our CenCoMA headquarters. Teams score 10 points for every kilo of polyethylene plastic (soda bottles, etc) turned in, as well as an additional point for every kilo of paper or cardboard. Teams must register before June 5.

The last day to turn in recyclables is World Ocean Day, June 8. For more information on the Recyclathon, call 135-1907.

Scripps Publishes New Study on Overfishing in the Gulf 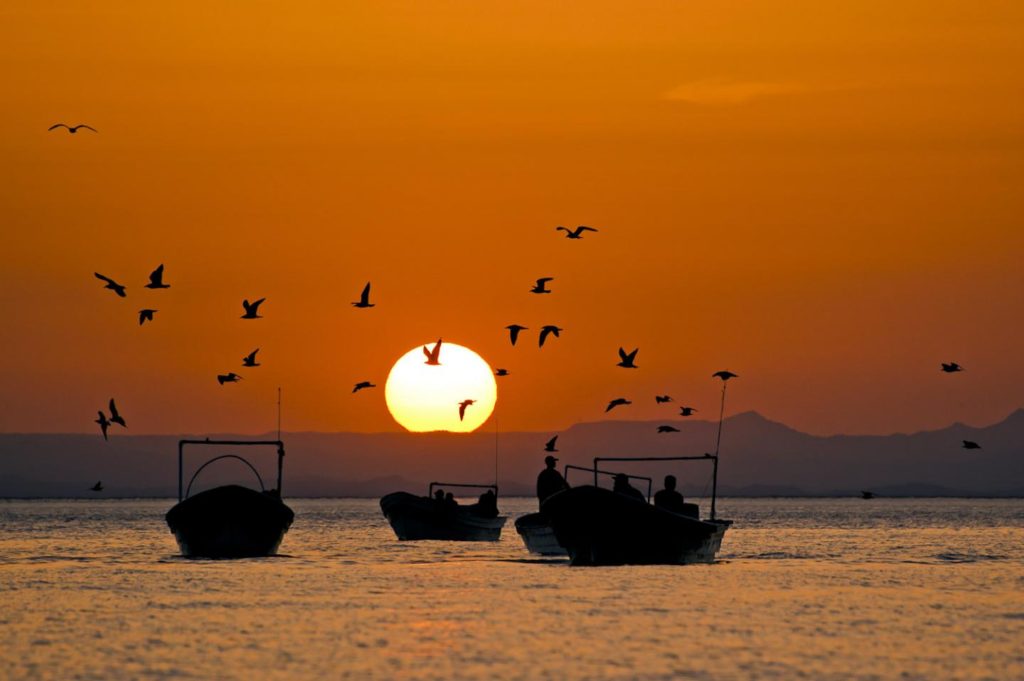 These are fishing pangas in the Gulf of California.

A new study out of the University of California’s Scripps Institution of Oceanography in San Diego suggests that more small-scale fishing boats are operating in the Gulf of California than is economically and ecologically sustainable, suggesting that local fishermen are spending more time and money to catch fewer fish. For more information on the study:

Although the study’s data were collected some time ago (2006-2009), few fishermen around Loreto would argue that fishing has gotten better over the last 10 years, and most would argue that fish sizes have gotten smaller. With operating budgets for Loreto’s marine park cut to the bone, Park resources for surveillance and enforcement, and for research to improve fish stocks, are minimal.

In coming months, Eco-Alianza will detail in various publications, and hold public forums to discuss, ways the organization can address the overfishing issue as it impacts Loreto’s artisanal fishing culture. These include (but are not limited to):

•  supporting the Park’s surveillance and enforcement efforts
•  supporting the Sister Parks initiative so resources and expertise from Channel Islands National Park in Ventura, CA can be provided when requested
•  working with local fishing cooperatives to improve business operations and to support best practices for fishing operations
•  supporting the Park’s Citizens’ Advisory Board to assist the Park however possible
•  building a business incubator to support entrepreneurs who have ideas for sustainable businesses, especially related to eco-tourism.

Interested in getting involved? Watch this space for opportunities to serve on Eco-Alianza volunteer committees, or send an email explaining your interests and background to: Edna.Peralta@ecoalianzaloreto.net . 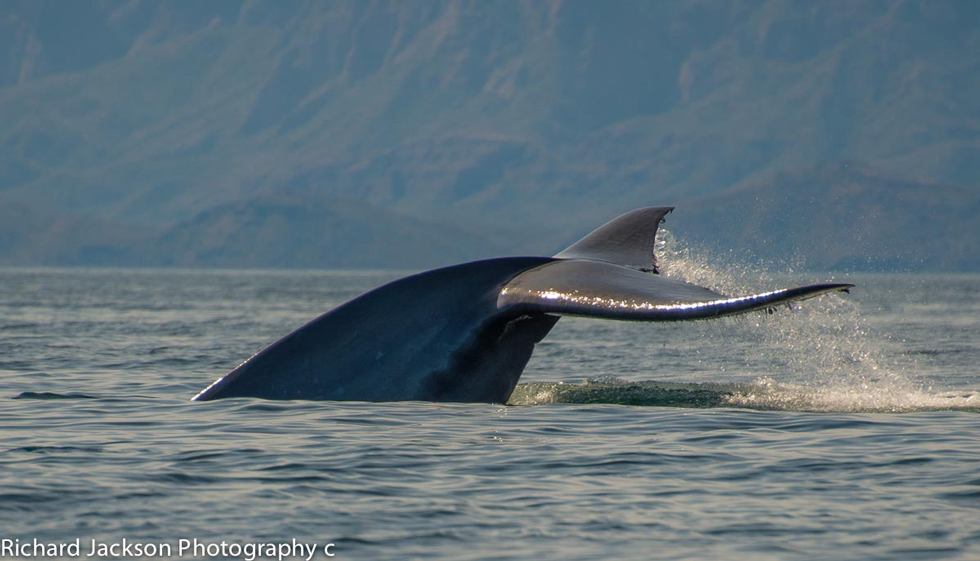 If you haven’t seen it yet, you owe yourself the visual treat of watching the world’s largest animal, the blue whale, in an amazing short video recorded by scientists from Oregon State University.

The drone footage captures a whale opening its mouth and engulfing a large concentration of krill, just as they do here in the Bay of Loreto National Park. It also shows the whale approaching a second concentration of krill and apparently determining that it wasn’t worth the effort (opening its gigantic mouth slows the whale down considerably, resulting in a large expenditure of energy).

As reported in last month’s Soundings, Loreto’s first annual bird and wetland festival was a huge success, including bird walks in Loreto and Loreto Bay, educational workshops, a photography class, talks about wetlands, protected species and other subjects, murals, and art exercises. 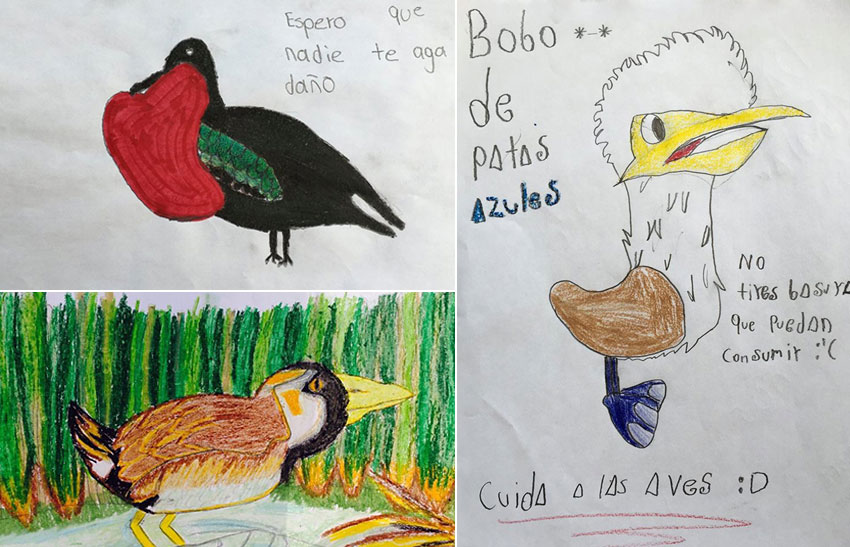 The festival wrapped up April 28 with a bird photography and artwork exhibition in the ground-floor art gallery at Loreto’s City Hall. Several of the children who attended the workshop at Eco-Alianza displayed their artwork, and were awarded with prizes and educational materials.

Plans for next year’s festival are already underway!