On April 24, Eco-Alianza hosted the Third Annual “One Ocean Film Festival” on the elegant grounds of Rancho El Jaral overlooking the beautiful Gulf of California and Parque Nacional Bahía de Loreto, our very special place on Earth we all work to conserve and protect.

More than 125 supporters enjoyed an outdoor program of nature-related films and presentations after an enjoyable social time and delicious meal served by culinary sponsor, Hotel La Misión Loreto. While following all COVID safety protocols, participants at the fundraising event enjoyed mingling in an outdoor setting. As a result of the generosity of Eco-Alianza’s supporters, attending or absent, sufficient funds were raised to support Environmental Education programs for 2021.

Eco-Alianza staffers and volunteers were on hand to answer questions and talk about the wide variety of Eco-Alianza programs and about plans for innovative new programs after a year of restrictions and sparse crowds and postponed events.

There were discussions related to social advancement and innovation necessitated by the “pause” of 2020. An excellent example of Eco-Alianza meeting the challenge are newly-enhanced abilities to stream and archive live events on the Internet to expand environmental education workshops to a worldwide audience, as well as being used for other events (see article below on Mayoral candidate forum).

The Film Festival began with a beautiful 15-minute video presentation by Richard Jackson, who is famous in Loreto for his nature and wildlife images but whose forays into video have not been as widely known. Time-lapse photography and video, set to music, transfixed the audience as they watched desert landscapes and the Loreto environment evolving through various seasons and weather patterns from drought to clouds to transformative storms. 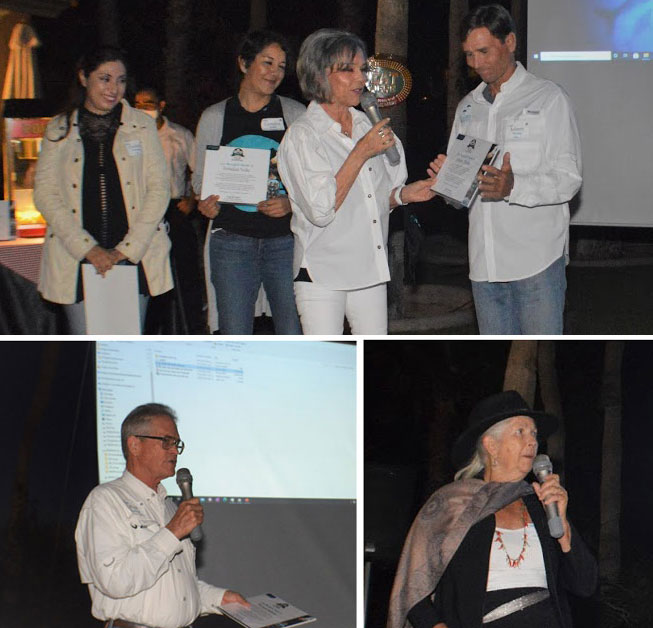 Trudi Angell then presented a selection of special clips and engaging stories from “La Recua,” a film project that follows Darío Higuera Meza, a traditional saddle maker from Rancho El Jarillal. In 2018, the year he turned 70, Darío traveled 200 miles in 20 days by mule-back, herding a pack train of donkeys from an oasis in the heart of the Sierra de la Giganta, all the way to La Paz. He and his family packed a load of Goat Cheese, Dates, Sugar-cane Candy, and 10 gallons of famous Comondú wine. Trudi’s presentation gave a glimpse into the trials and tribulations of creating a documentary film about the journey, which now is making the rounds of various film festivals.

The feature film of the evening was a new production by Emmy-winning cinematographer Johnny Friday, “Sea Lion Rescue.” The documentary chronicles rescue operations by a team of conservationists and veterinarians to save injured sea lions on the islands near La Paz. Johnny was able to show the film in Loreto with special permission, as it has now been sold to National Geographic Latin America.

In addition to Johnny Friday, veterinary surgeon Daniela Bárcenas and filmmaker Eréndira Valle were on hand to introduce the film and to answer questions. They were also the film’s subjects and protagonists as founders of the Mexican nonprofit Rescate de Lobos Marinos. Although not detailed in the film, they have visited Parque Nacional Bahía de Loreto and many other natural protected areas in Mexico to provide training to park employees on how to safely provide care for entangled or injured sea lions.

Eco-Alianza Co-founder and Treasurer, Linda Kinninger, on behalf of Hugo Quintero, Co-founder, CEO, expressed heartfelt thanks to the entire audience for supporting the event and all of Eco-Alianza’s activities. Linda noted there are “big things to come”, as Eco-Alianza continues to grow, and thanked a visiting group of University of California researchers and educators on hand for the event. On behalf of the Board of Directors, Linda especially thanked Tony Kinninger and the event’s other underwriting “Producers” and “Directors,” – Hotel La Misión Loreto, Heather and Kyle Westing, Cynthia Hermes and Tom Wilson, and Kathryn and Chuck Mitchell. The event and the environmental education programs would not have been possible without the presenters and the contributing Patrons and Donors, all recognized on a Thank You poster now on display in the reopened lobby at Eco-Alianza’s CenCoMA headquarters.

In the week following the Film Festival, Eco-Alianza’s education staff hosted a follow-up event for the families of Loreto students who took part in a workshop and international environmental filmmaking competition. Students are learning about technologies and techniques by telling environmental stories and spurring social change not only in Loreto but worldwide. 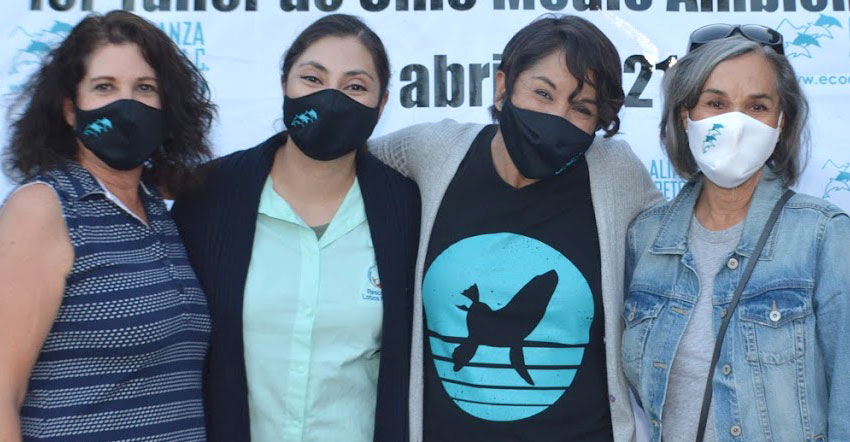 As shown in the festival’s feature film, Eréndira Valle and Daniela Bárcenas of La Paz are México’s experts when it comes to rescuing injured and entangled sea lions. Subsequently, Eco-Alianza’s Board of Directors voted to contribute a portion of the event’s proceeds to support their nonprofit organization, and so can you! Click here to learn more. 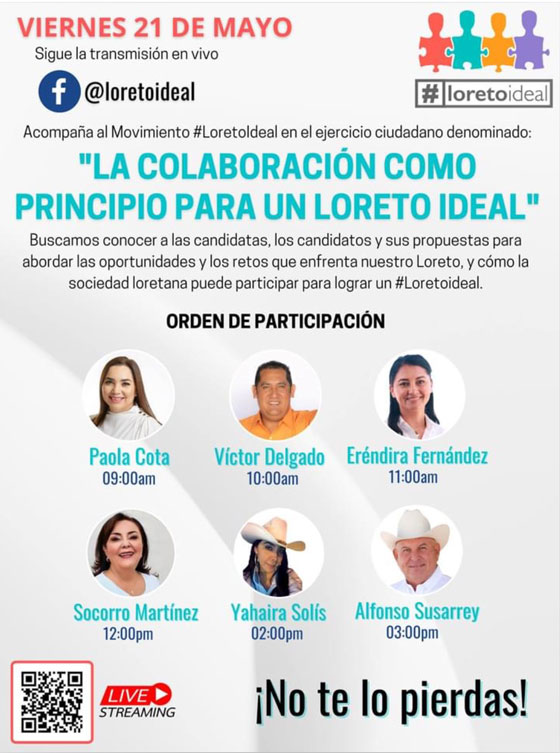 Because we believe that an Ideal Loreto is possible, the 14 local organizations that together founded the #LoretoIdeal movement over three years ago, invited the six candidates running for Mayor of Loreto to participate in the forum “Collaboration as a Basic Principle for an Ideal Loreto.” This event that Eco-Alianza jointly organized as a member of #LoretoIdeal took place at the facilities of the Centro Comunitario del Medioambiente (CenCoMA) on Friday, May 21, 2021.

The purpose of this event, without any desire to proselytize, was to directly learn about the proposals and government plans of the candidates, about how they are proposing to resolve the issues and challenges that are relevant to our movement, and to identify the potential areas of mutual interests and collaboration.

The members of #LoretoIdeal believe that respectful dialogue between participatory, informed, and purposeful citizenship and an open and collaborative government is essential to face the challenges of our municipality and thereby improve the living conditions of Loretanos.

All things being equal, the public forum was promoted to formalize a letter of commitment with #LoretoIdeal to collaboratively work a shared agenda of the priority challenges to be resolved and to advance towards an ideal Loreto, once the new and elected Mayor takes office.

The letter of commitment was formally signed by Paola Cota, Eréndira Fernandez and Socorro Martinez. We regret the absence of three of the six candidates to the event.

The streamed forum videos from May 21, of each of the three candidates who were present, are available for viewing on Eco-Alianza’s Facebook page and the LoretoIdeal Facebook Page.

A home in Loreto Centro generously donated to Eco-Alianza by Jim Gries,
a long-time loyal supporter of Eco-Alianza’s projects and programs. 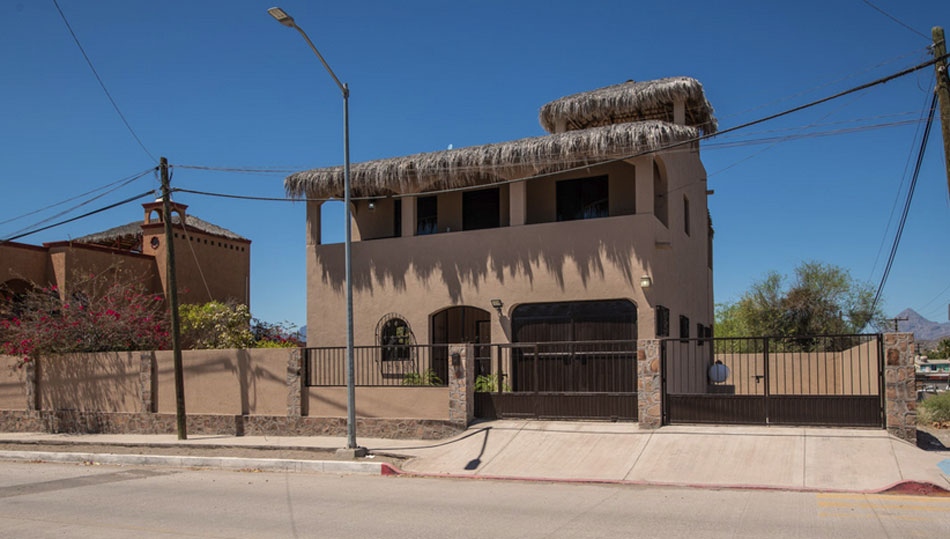 Special features of this two story/two bed/two bath home include a large garden with fruit trees and additional space to customize the garden with more landscaping or a pool; an attached one-car garage, as well as a side yard for additional storage of vehicles or a boat/RV. Amazing sea and mountain views from the third-floor terrace! Asking price is $285,000 USD.

Net proceeds from the sale of this home will directly benefit Eco-Alianza’s new project of international cooperation between the U.S. and Mexico, to be dedicated for scientific research and education programs in the Loreto region and the Gulf of California. Eco-Alianza plans to establish Centro de Estudios Medio Ambientales de Loreto (CEMA) / Research Center for the Environment in downtown Loreto, adjacent to Eco-Alianza’s headquarters. The project is a partnership of Eco-Alianza and the University of California Natural Reserve System (UCNRS). 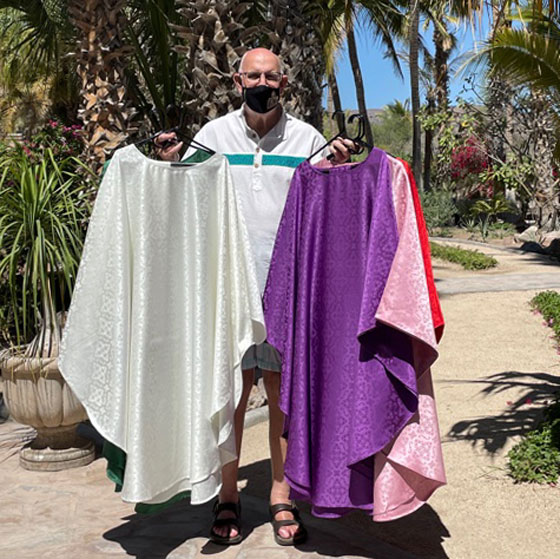 The gift included five vestments – “chasubles” worn for Mass by the priest. There are five liturgical colors worn in different seasons, explains Father Tom: white (Christmas and Easter), violet (Advent and Lent), green (Ordinary time), red (Pentecost, Holy Spirit, and martyrs), and rose (one Sunday in Advent and one Sunday in Lent).

“These new chasubles are a gift from Mission Basilica San Buenaventura to our Sister Mission, Nuestra Virgen Loreto Conchó particularly for the summer months,” says Father Tom. “They are light weight with no collar. This is one way we can support and honor each other. At least once each month at the Mission Basilica we offer a Mass intention for the parishioners of our Sister Mission.”

“In years past, we financed eight new pews to replace older broken ones. These were installed last year. This is all part of the Sister Cities-Sister Missions-Sister National Parks relationship between Loreto and Ventura (San Buenaventura).”

“Nature Notes” is a short feature detailing some of the wondrous, seasonal activities taking place around us. 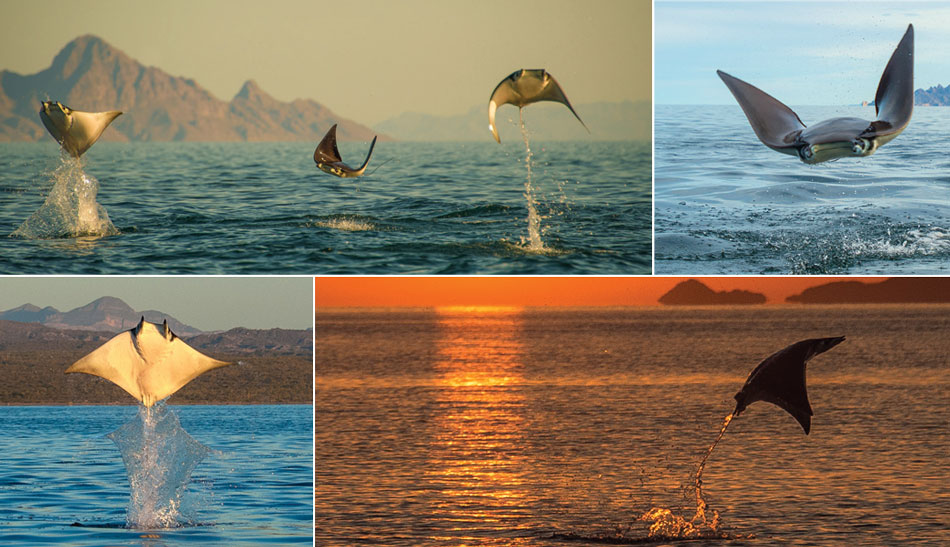 Why do Mobulas jump?

This has been a question that I have pondered for many years. Being a student of natural history, and having made a living as a nature photographer since 1975, I had come up with several theories of my own. Perhaps they are pursuing prey, avoiding predation themselves, trying to get rid of parasites, showing off for potential mates, or communicating with other Mobula Rays far away.

So imagine my excitement when I learned that one of the guests attending Eco-Alianza’s Sister Parks symposium had been studying Mobulas in the Gulf of California for 16 years. Surely he will enlighten me. “Why do Mobulas jump” I asked, and without a moment’s hesitation he said “Because they can”. This of course was not the answer I was looking for so I did some more studying on my own.

Mobula Rays (Mobula munkiana) are a genus of ray found in tropical and warm waters. They are also called Devil Rays, which refers to the two modified fins on the front of the head that resemble horns. These fins help funnel water and plankton into their mouths.

Mobulas can be seen in the Loreto area in late spring and summer (April-July) in large congregations sometimes numbering in the tens of thousands. Spanish speakers call these animal Rayas Mobulas, but locally you may also hear them referred to as “Cubana.”

Most of the breaching is done by the males, who can be up to a meter wide and are capable of jumping to a height of three meters. Females give birth to a single pup every three to five years making Mobulas one of the slowest reproducing fish in the ocean. Mobulas’ tendency to school in large numbers and travel close to shore makes them frequent victims of commercial by-catch in nets. They are listed as “Near Threatened” on the International Union for the Conservation of Nature’s (IUCN’s) global red list of threatened and endangered species.

Perhaps the answer to why do Mobulas jump — “Because they can” — is in fact the best answer, after all, considering we humans also delight in a simple jump into the water!

Rick Jackson is a Board of Directors Member of Eco-Alianza, who also donates the stunning images you see in our annual calendar. His gallery, formerly on Loreto’s plaza, has moved to Hotel Las Cabanas de Loreto and is open by appointment only. “Please email me when you would like to come by at jackson.richard18@yahoo.com .”