These days, it seems that no matter where you go or what activities you’re involved in, Spring is bustin’ out all over! Blue whales are abundant in the Bay of Loreto National Park. Spring officially begins next week, but warm temperatures and winter moisture are transforming deserts with spectacular wildflower blooms and explosions of color. Birds are busily building and repairing nests in anticipation of Spring hatchlings, or are migrating back northward, and part-year human residents of Loreto are keeping pace with frenetic activities of their own. This issue of Soundings offers a sampling of Springtime in Loreto and best wishes as we all witness the miraculous transformations around us.

Seemingly in response to Loreto initiating the Blue Whale Festival, the census of Blue Whales in the Bay of Loreto National Park (PNBL) this year has increased dramatically. At the end of February, Park biologists announced a current census of at least 20 individual Blue Whales within Park boundaries. Last year that number was 10.

If those numbers don’t seem impressive to you, keep in mind that this endangered species is by nature solitary and requires a tremendous amount of energy to sustain itself, especially during the energy-intensive process of nursing its young. After a long migration from northern waters, during which the whales eat very little, the largest animal on earth requires sustenance! PNBL is noteworthy as a sanctuary for Blue Whales partly because of its powerful upwellings of nutrient-rich water, laden with krill.

The Park’s protected waters provide some of the best opportunities in the world to view these majestic creatures up-close. It’s possible that a change in whale-watching techniques in recent years is contributing to the whales feeling less stressed during their time in our local waters. Researchers and whale-watching guides report a high level of success with “passive” whale watching, during which boats completely cut their engines when in the proximity of whales. The technique is explained in an amazing video put out by PNBL and CONANP:
https://www.youtube.com/watch?v=vJxaU3THLQY&feature=youtu.be

The second annual Blue Whale Festival is just days away (March 16, 17, 18), and offers opportunities for learning and for fun, and of course for whale–watching excursions. At press time, some festival details are still being decided, but should be available on our Loreto.com website, as well as on http://ballenaazulloreto.org.mx. During the festival, Eco-Alianza will be hosting up to 100 local children with educational games, workshops, and special ceremonies. On the final day of the festival, Eco-Alianza will host Dr. Alejandro Gómez from UABCS at CenCoMA, 6 p.m., for an informative presentation about The Blue Whale in Baja California Sur. Dr. Gómez is a research biologist and professor specializing in coastal and marine sciences. The presentation is free and open to the public.

Eco-Alianza’s Visiting Scientist series continues later this month with a fascinating exploration of warm and fuzzy flying mammals – the incredibly agile and adaptable bats that help the desert bloom around us.

Jaclyn (Jackie) Aliperti is a PhD candidate in the Ecology program at the University of California, Davis. She assisted with various studies on bat ecology in the US, Ecuador, Panama, and Chile before completing her Master’s work on bat-plant interactions between two species of bats and the cardón cactus in Baja California Sur. She is now pursuing a PhD on the behavioral and spatial ecology of a small mammal population in Colorado. Jackie is interested in science communication and, in addition to research, enjoys teaching and mentoring students.

Jackie says she is “broadly interested in the behavioral and spatial ecology of vertebrates, as well as how we can use ecological data to promote conservation of biological diversity in a rapidly changing world.” In her field research in Loreto, that translated into a groundbreaking study that proved a certain species of scorpion-eating bat is a major pollinator of the cardón cactus. The proof included capturing and analyzing the breath of bats, a process she described in detail in a recent paper published in the Journal of Mammalogy.

Jackie’s presentation brings a big-picture view of the desert into close-up detail, and traces her scientific process in discovering previously-unknown facts about desert ecology here in Loreto. Amazing slides and video will be part of Jackie’s presentations at CenCoMA, Eco-Alianza’s headquarters on Hidalgo in downtown Loreto. She will present the program in English on March 29 at 5:00 p.m., and in Spanish on March 30 at 6:00 p.m. Both programs are free and open to the public. 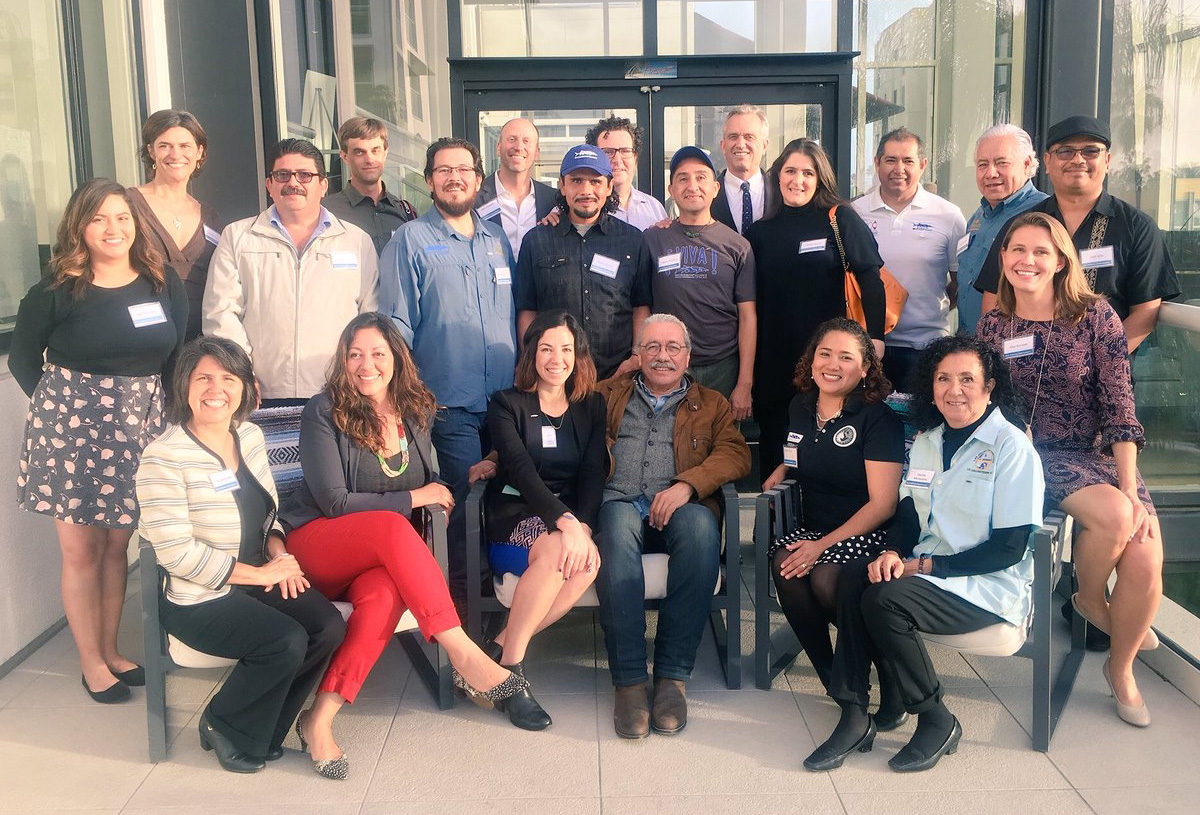 The gathering was sponsored by Environment Now and the International Community Foundation to acknowledge the critical work in which these individuals engage to protect the water, watercourses, and pristine coasts of the Peninsula.

The Baja California Waterkeeper Fund through ICF supports a regional collaboration of 10 individuals (Waterkeepers) positioned at local organizations working throughout the Baja peninsula to organize efforts around clean water and healthy communities. Collectively, they monitor over 75 watersheds and coastal areas of the Baja peninsula.

During the gathering in Santa Monica, organizers showed a short video featuring Hector Trinidad speaking about his work with Eco-Alianza’s program. You can view the wonderful short video here: https://www.youtube.com/watch?v=HPcSl4G9g4s

Grants from Environment Now and those through ICF have provided major funding for Eco-Alianza’s Coastkeeper program, which samples and tests water at 12 Loreto-area beaches and determines their suitability for recreational activities. Funds from Environment Now also have enabled Eco-Alianza to serve as mentor to the Santa Rosalía Coastkeeper program, helping to initiate it and establish its protocols, provide training, and answer questions.

For more information on the Loreto Coastkeeper program:
https://www.theswimguide.org/affiliates/loreto-coastkeeper/ 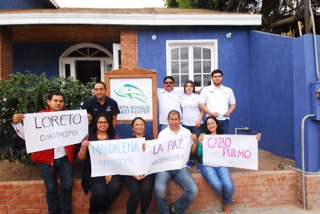 Garage Sale and Raffle – a Great Motivation
for Spring Cleaning

Eco-Alianza’s fifth annual Garage Sale and Raffle is set for April 8, providing the perfect opportunity to send some lesser-used items moving on their way. What’s hiding in those closets and drawers and the nooks and crannies of your house?

Items can be dropped off at our CenCoMA headquarters on Hidalgo between 10 and 3 Monday through Friday, or during the same hours at the Agua Viva Management office in Loreto Bay. All items in good condition and working order are gratefully accepted (tax deductible for U.S. and local residents). We cannot handle any more English language books, but welcome all household goods, kitchen items, clothing, furniture, appliances, sports equipment, baby furniture, toys, towels, sheets, boating/fishing gear, and general bric-a-brac!

The event benefits the environmental education programs of Eco-Alianza, and is an increasingly popular social event, with bargains and unusual items galore! Eager shoppers begin lining up outside our CenCoMA courtyard before dawn. Gates open at 7 a.m., and the sale ends at noon. Great prizes provided by Loreto sponsors and supporters will be raffled around 10:30 (you need not be present to win). Look for volunteers around town selling raffle tickets!

Lizette Inzunza, well known around town for her leadership in the education, arts, and cultural sectors, will chair the committee and lead its efforts to establish meaningful connections with our Sister City – Ventura, California. The Committee also will coordinate some efforts regarding the Sister Parks and Sister Missions projects.

The day following the organizing meeting and the swearing-in of Ms. Inzunza, 15 new committee members welcomed a delegation from their counterpart Sister City Committee in Ventura, California. Father Tom Elewaut of Misión San Buenaventura and Fiorella Calderoni, from the Ventura Visitors and Convention Bureau, brought greetings, welcome news, and inquiries from Ventura.

Ms. Calderoni and others in Ventura have formed a “Migrant Club” made up initially of 10 residents of Ventura who are Mexican citizens that have migrated to the U.S.  The concept is a program of the Mexican government through which Mexican citizens living in the U.S. can support public works projects in their mother country that will benefit the population at large. Migrant Clubs raise project funds that are then matched 3-to-1 by municipalities, Mexican state governments, and the Mexican federal government.

The discussion turned to what feasible project on municipal land would best benefit Loreto, with the Migrant Club in Ventura and Ventura’s Sister City Committee now making fundraising plans. Soundings will report on this project as it proceeds.

The delegation from Ventura, as well as Loreto Sister City Committee members, and representatives of the municipal government and other local agencies, all expressed optimism about the development of the Sister City relationship. Father Tom Elewaut reported on his hope to organize an educational trip to Loreto including Pastors from all the missions in Alta California. Fiorella Calderoni also announced a trip to Loreto this month of 17 middle school students from Ventura who are part of a language immersion program, and are eager to practice their Spanish.

Watch this space as details develop!

You may have read in previous issues of Soundings, that Eco-Alianza staffers have been involved in Start-Up Weekends in La Paz over the last few years – as presenters, participants, organizers, and sponsors.

The three-day weekends typically involve participants in an intensive workshop process of exploring, distilling, and developing entrepreneurial ideas over the course of 54 hours. The weekends have produced dozens of successful concepts that now are operating as small businesses throughout Baja California Sur and beyond.

The work is part of our partnership with UABCS and with Moove.com, which helps provide funding mechanisms and capacity building for the small businesses, as well as providing ongoing training. Eco-Alianza has especially been involved in connecting Loreto-area entrepreneurs and potential entrepreneurs to the trainings, as part of our Business Incubator program (encouraging sustainable businesses that provide local economic growth through alternative livelihoods).

Upcoming (March 24 to March 26) is “Start-Up Weekend Women La Paz,” an adaptation of the standard Start-Up Weekend format focusing specifically on female entrepreneurs. Eco-Alianza is a Sponsor of the event, and will be taking five Loreto-area women on the trip. Two women from Ligui operate a fishing cooperative, two from Loreto are developing a business related to chocolate clams, and one from Ensenada Blanca has an entrepreneurial idea to explore and/or develop.

The weekend will include workshops on entrepreneurial culture as well as critical business development training. For more information and the registration form:
http://www.up.co/communities/mexico/startup-weekend/10595 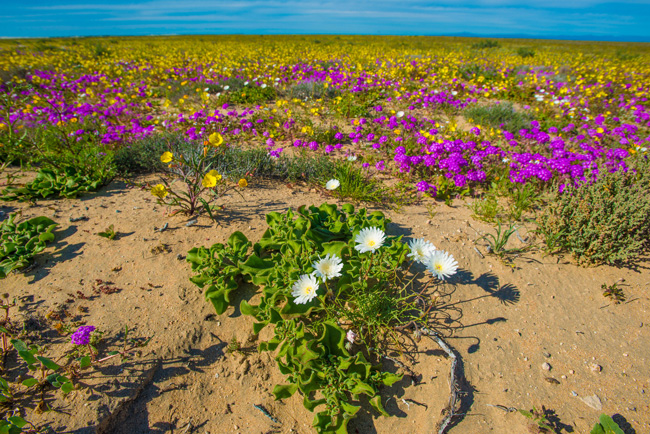 November 11 – DATE CHANGE – Eco-Alianza’s 10th Anniversary Celebration and Dinner/Auction Fundraiser. This is a new date made necessary by logistical considerations beyond our control. Please adjust your calendar and make plans to join us for this momentous occasion! Thank you!