Just about anyone who has visited Loreto knows that Parque Nacional Bahía de Loreto (PNBL) is special, and worthy of protection. But what’s the best way to spread that message worldwide? Children!

Or at least that’s part of the solution put forth by the United Nations Educational, Scientific, and Cultural Organization (UNESCO). In 1972, the UN passed the World Heritage Convention in Paris, asking countries around the world to designate cultural and natural sites worthy of special protection. Since that time, 1,052 World Heritage sites have been approved – 814 cultural, 203 natural, and 35 mixed. Of the 203 natural sites, 49 are World Heritage marine sites, including the Islands and Protected Areas of the Gulf of California (of which our Bay of Loreto National Park is a part), which was approved in 2005. (check out the UNESCO marine sites map with the link below)

Valentina and Itzayana from Loreto in the international Ocean Pledge video.
Photo courtesy of UNESCO.

A group of children thought it would be a good idea, as a celebration of World Oceans Day on June 8, to have children worldwide say why they love the ocean and to join with adults in pledging to protect our ocean treasures for future generations. The idea caught on and word went out to the 49 UNESCO World Heritage marine sites to send in videos. Locally, PNBL Director Alejandro González Leija contacted Eco-Alianza Education Coordinator Edna Peralta, who rounded up several local children who have been active for many years with Eco-Alianza programs. She was confident the programs had instilled in them the love and respect for the ocean that would shine in the videos. PNBL supplied a boat to take Edna and the children to Isla Coronados to film their pledges, and the rest is history.

In a ceremony in New York, Prince Albert of Monaco was the first to sign the pledge, accompanied by dignitaries and some of the children who had sent in video pledges. The touching two-and-a-half minute compilation video (link below) was released, including 31 children from around the world. Four who made it into the video are from our Gulf of California heritage site, including three from Loreto (the two girls with pink sun hats and the one with a red bill cap).

http://whc.unesco.org/en/myoceanpledge (scroll down to the video)

HSH Prince Albert of Monaco II was the first to sign The Ocean Pledge.
Photo courtesy of UNESCO.

People from across the globe are invited to sign the pledge digitally on the website of UNESCO’s World Heritage Marine Programme,
http://whc.unesco.org/myoceanpledge and on social media using #MyOceanPledge . 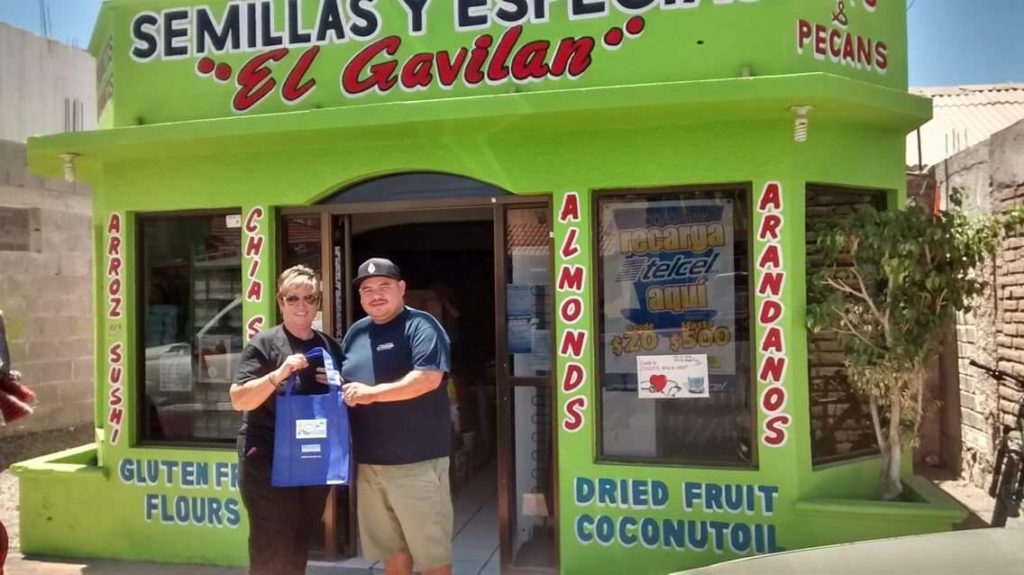 Gabriel from Semillas El Gavilan and Gilberto from El Pescador, with Rosa Campos from Eco-Alianza’s Board of Directors, join the “Say No to Plastic Bags” campaign.
Eco-Alianza staff photos.

Last month we reported that Eco-Alianza has renewed its “Say No to Plastic Bags” campaign and is offering beautiful blue reusable shopping bags for sale. The bags feature the marine park logo on one side, and Eco-Alianza’s 10th anniversary logo and the Loreto Coastkeepers logo on the other. They hold up to 40 pounds of groceries.

We already have two project sponsors who are not only offering the bags for sale, but are also offering merchandise discounts or specials for shoppers who bring the bags back to reuse them for grocery shopping. El Pescador and Semillas El Gavilan are selling the bags for 120 pesos or $7 US dollars each.

Merchandise discounts on return trips to the sponsor stores are up to 10% on selected items. The bags are also available at our CenCoMA headquarters and we are working to secure additional stores as project sponsors so that using the bags will offer valuable discounts all around town!

The main thing is, using and reusing the bags reduces the use of plastic bags, of which so many end up floating (or sinking) in the marine park and endangering wildlife. Please thank our business sponsors when you buy and when you reuse your bag, and thank you for your support!

Our Oceans, Our Future – World Oceans Day at Eco-Alianza 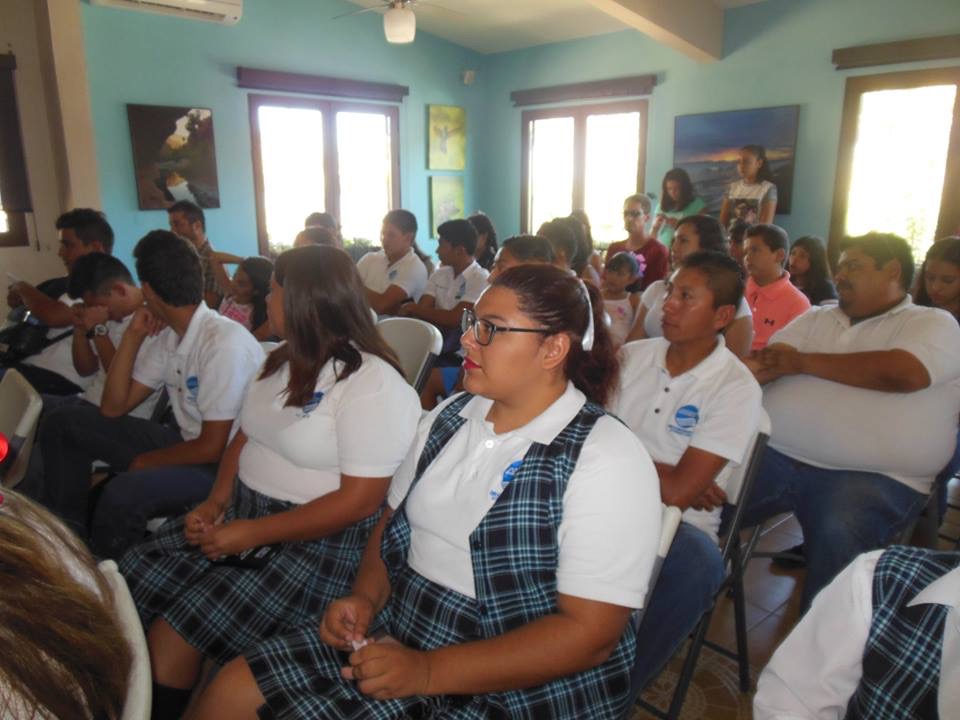 “Our Oceans, Our Future” filled the auditorium at Eco-Alianza.
Eco-Alianza staff photo.

This summer season’s public programs began on June 8 with Eco-Alianza Environmental Education Coordinator Edna Peralta presenting a multi-media exploration of what World Oceans Day is all about. With a crowd of about 50 attendees, from 5 to 60 years old, Edna talked about the historical significance of World Oceans Day, showed two videos related to the topic, and led a discussion of the importance of the ocean to our everyday lives.

Central to her presentation was the importance of personal involvement for each of us – learning to speak up during our purchasing moments by saying “sin bolsa por favor” (without a bag, please), “sin popote por favor” (no straw, please), and incorporating into our lives the three R’s of conservation – “reuse, reduce, and recycle.”

As noted in the Recyclathon article below, she also thanked the 56 Loretanos who participated in the recycling contest, awarding certificates and announcing final results and prizes. 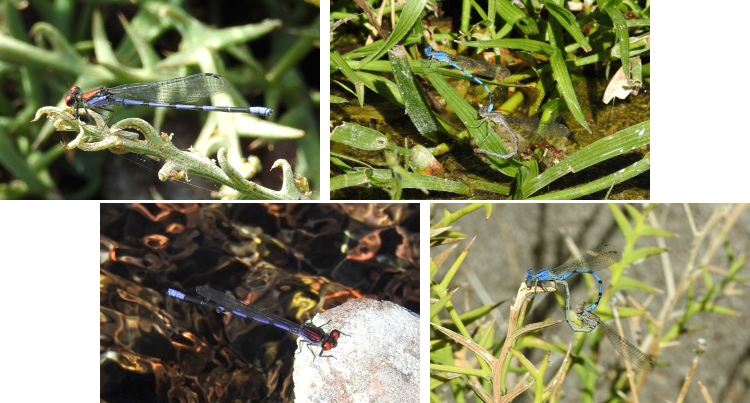 Damselflies are flying about in the back country right now in growing numbers. They are in the order Odonata along with Dragonflies and differ from them in generally being smaller sized and having a tendency to fold their wings straight back at rest instead of holding them out to their sides as the Dragonflies do.

Damselflies can be found near almost any fairly clean fresh water, especially the very small intermittent creeks still to be found in many of the local hiking canyons. They spend long periods in the water as nymphs, and while there eat many smaller insects and some very small crustaceans. They are now emerging from their nymph (larval) states as adults and busily creating more nymphs by coupling and laying eggs.

As adults they continue eating insects. Damselflies are preyed upon in all life stages by birds, fish, amphibians, reptiles, insects, spiders, dragonflies, other damselflies, etc.. There are nearly 3,000 species of Odonata recognized worldwide, and they generally are doing well but can be threatened by habitat alteration and chemical introductions (i.e., development and pesticides).

Next time you see one of these dazzling aerial jewels, you might want to thank it for eating a great many of the kinds of small insects that we humans find obnoxious.

As reported in the May Soundings, this year’s Eco-Alianza Recyclathon event concluded on World Oceans Day, June 8, with a celebration and the awarding of prizes. Each of 14 four-person teams chose the name of a marine animal and collected plastics, paper, and cardboard for approximately 11 weeks.

Materials were turned in to the recycling operation run by César Diaz on the Carretera Transpeninsular on the north end of Loreto. A total of 3.3 tons of plastics and more than 660 pounds (300 kg) of paper and cardboard was turned in for recycling.

The top team, the Sea Lions, were from the Secundaria Modesto Sanchez school. Edna Peralta, the event organizer and Eco-Alianza’s environmental education coordinator, credited teacher Karina Isabel Ramirez Treviso with motivating several of the teams. This is the second year in a row that one of her teams took first place.

The event was part of Eco-Alianza’s ongoing “Say No to Plastics” campaign, as well as providing environmental education about recycling.

The recent site will add to these Pleistocene artifacts found in an earlier dig on Santa Rosa Island.
Photo courtesy of Smithsonian Institution.

(As the initiator of the Sister Parks relationship between Parque Nacional Bahía de Loreto and the Channel Islands National Park off the coast of California, Eco-Alianza through our Soundings newsletter will occasionally report on significant happenings at our Sister Park).

Our Sister Park, the Channel Islands National Park off the coast of Ventura, CA, has five islands, just as does the Parque Nacional Bahía de Loreto. In addition to protecting natural treasures, the islands may hold the keys to knowledge about how North America was inhabited more than 10,000 years ago.

This spring, as Park officials were beginning renovations on a 150-year-old ranch house on Santa Rosa Island, 40 miles off the coast of Ventura, they were delighted to discover ancient stone tools and potentially a highly-significant archeological site. The renovation project was immediately halted and the area set up as an archeological dig. The less than ideal part of the situation is that the archeological site is directly underneath the house.

The stone tools discovered at the site indicate that it was inhabited by paleocoastal people in the Pleistocene era. The tools are characteristic of sites occupied 8,000 to 13,000 years ago. Although no human remains have yet been found at the current site, a different location on Santa Rosa Island in 1959 and 1960 was where scientists discovered Arlington Springs man, whose bones were determined through radio-carbon dating to be 13,000 years old, possibly the oldest human remains in North America. Earlier this year, a human settlement potentially 14,000 years old was discovered on Triquet Island, northwest of Victoria, Canada.

For more information on the discovery at Santa Rosa Island:
http://www.vcstar.com/story/news/special-reports/outdoors/2017/06/06/crew-uncovers-ancient-site-under-channel-islands-home/355277001/

Boom and Bust Year for Eared Grebes around Loreto and Elsewhere

At Eco-Alianza we had many people this spring asking us about the extraordinary number of dead eared grebes (Podiceps nigricollis) washing up on Loreto beaches. Some folks were quick to point fingers at potential pollution sources or poisonous natural sources or were just left shrugging their shoulders.

Our Coastkeeper team continued its regular monitoring of sea water quality during that time, even increasing the number of water tests at one point, but discovered no apparent causes of the high mortality rate for this one species.

Biologists in the Marine Park ultimately pointed to a probable cause that is explained fully in a research article presented in The Auk, the research publication of the American Ornithological Society, in 2002. Researchers from The Smithsonian and three other institutions explored a similar population crash in eared grebes that occurred in 1996 and 1997.

Essentially, an overabundance of these small birds, especially in warm sea temperature years, has them arriving here relatively thin after their migration from the north. High surface water temperature drives their food deeper and, unlike some other diving birds, they are unable to dive deep enough to capture enough food to survive. They starve to death in massive numbers. As the article explains, their population rebounds quickly after these crashes.

Eco-Alianza’s 11-person team works year-round on behalf of Loreto and its cultural and natural environment. If you are able to support us financially, thank you so much! And remember to join us for our 10th Anniversary dinner/auction celebration on November 11 – tickets on sale soon.

Have a great summer!