A 10-Year Celebration of Conservation 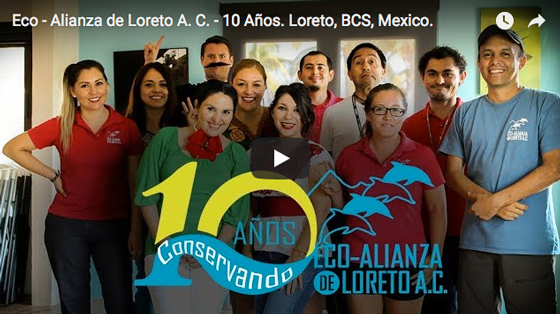 For those of you who were unable to attend the Gala last month, here is a link https://ecoalianzaloreto.org/10-years-of-eco-alianza-de-loreto-a-c-video/ to Eco-Alianza’s video, Ten Years of Conservation. The film was produced by volunteer Pepe Cheires, with amazing wildlife footage donated by Rick Jackson and Johnny Friday. Please feel free to SHARE the video with friends and family; it offers a great explanation of what Eco-Alianza is all about. Next month, we hope to distribute a version with subtitles in Spanish.

The film was shown at the Gala, at which we also discussed several new conservation initiatives, and expansion of environmental education and existing programs. We will report on those here in Soundings in the months to come. Enjoy the video, thank you for your steadfast support, and we look forward to your partnership and your ideas as we launch Eco-Alianza’s second decade of conservation! 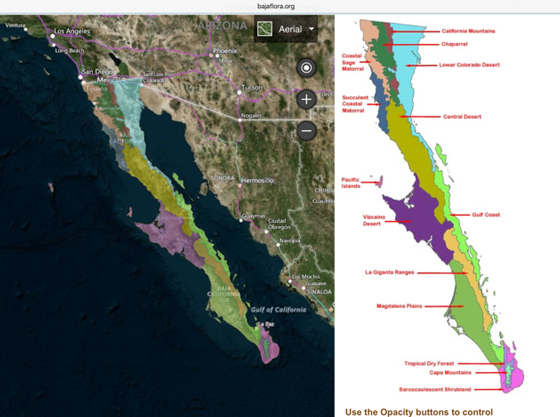 As part of the ongoing Visiting Scientist series, Dr. Jon Rebman spoke to a packed house on November 27 about “The Flora of Baja California Sur: Hot New Plant Discoveries and Cool Succulents.” The presentation, at Eco-Alianza’s CenCoMA headquarters, included dozens of beautiful slides, as well as stories detailing the wide variety of “pollination syndromes” that have evolved in Baja’s plants, as well as the incredible diversity in topography, microclimate, soil type, geology, and other factors that influence the survival of different plant species. 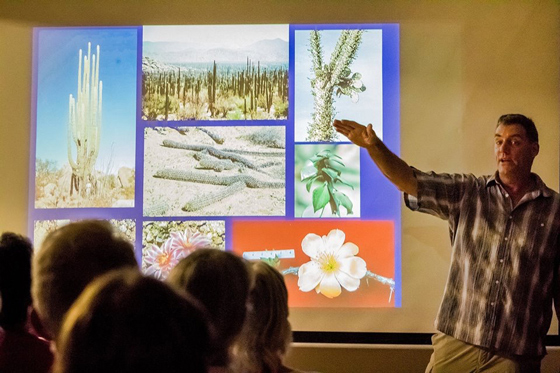 Dr. Rebman has served as the Curator of Botany for the San Diego Natural History Museum (SDNHM) since 1996, and is the co-author of the Baja California Plant Field Guide, the definitive work on the plants of the Baja Peninsula. He explained in intricate detail how different plants are adapted to use bats, birds, bugs, wind, gravity and other elements to expand their ranges and to survive under very challenging conditions. 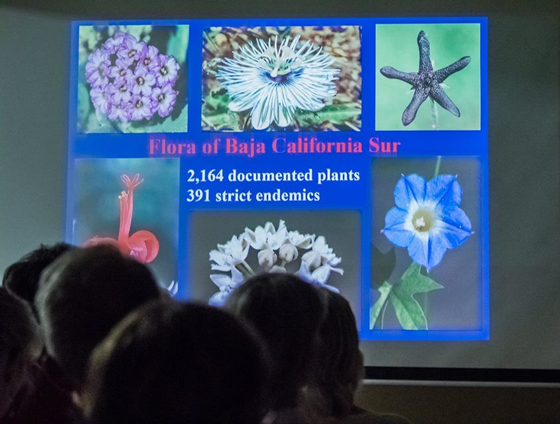 Rebman marveled at how the Baja Peninsula’s rate of endemism is higher than the rate exhibited on many isolated islands, and made a strong case for further study and for conservation of the rare and varied ecosystems present in Baja. In addition to continually monitoring and scouring the peninsula to update his field guide, Rebman also manages an ongoing project of SDNHM that uses citizen science to document all species of flora on the peninsula with GIS coordinates. The interactive website, with maps, photos, and checklists by ecological regions, is available at bajaflora.org . 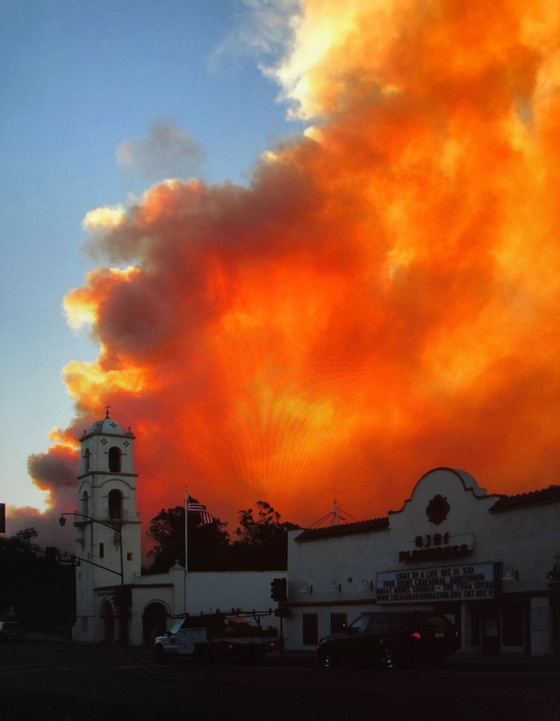 We are saddened by the devastating fires, tremendous winds, and clouds of toxic ash and smoke that have ravaged Loreto’s Sister City of Ventura, California this month. Hundreds of structures have burned to the ground, and no one in Ventura has been unaffected. The physical impact will continue for many months and years to come, and the emotional turmoil is immeasurable. 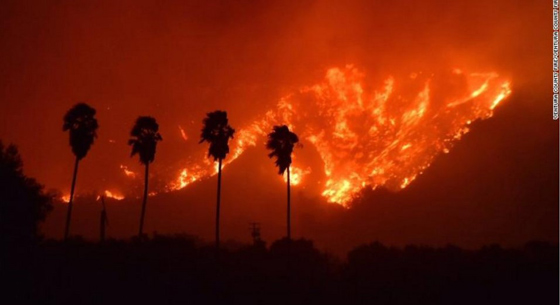 From Loreto, our hearts go out to our dear friends who we have come to know through our Sister City cultural exchange and through our work to cooperate internationally on developing our “sisterhood” relationship.

As a member of our Sister City Committee, Mayor Arely Arce spoke for all of us when she said: “Dear members of the committee and the whole community of the Sister City of Ventura, I hereby allow myself to send my solidarity and support to you. The sister town of Loreto and this H. VIII City Council, we regret the terrible events that are taking place because of the fires, hoping that they are well together, we all raise together a prayer for the safety of our brothers and sisters from Ventura and nearby places.” 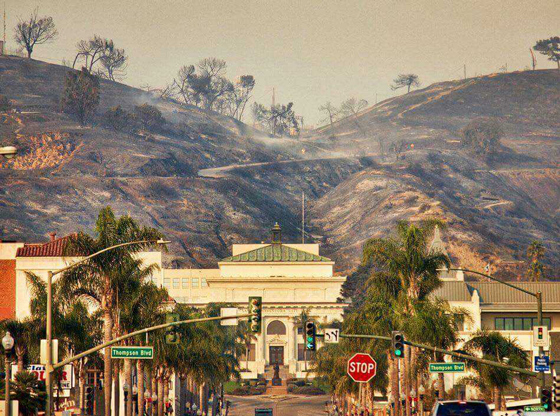 Many of our supporters have asked how they can support Ventura at this difficult time, and in the future. Fiorella Calderoni from the Sister City Committee (and also the Ventura Visitors and Convention Bureau) has many useful suggestions in the blog post linked here: https://visitventuraca.com/blog/thomas-fire-the-best-ways-to-help/ 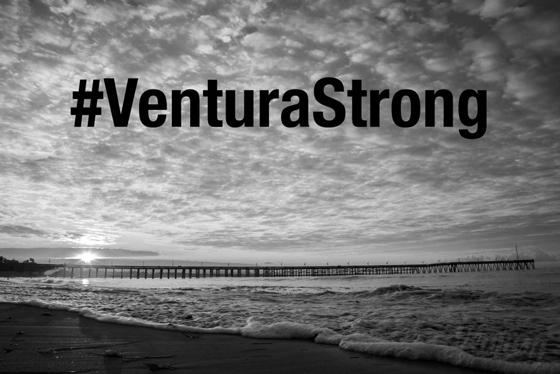 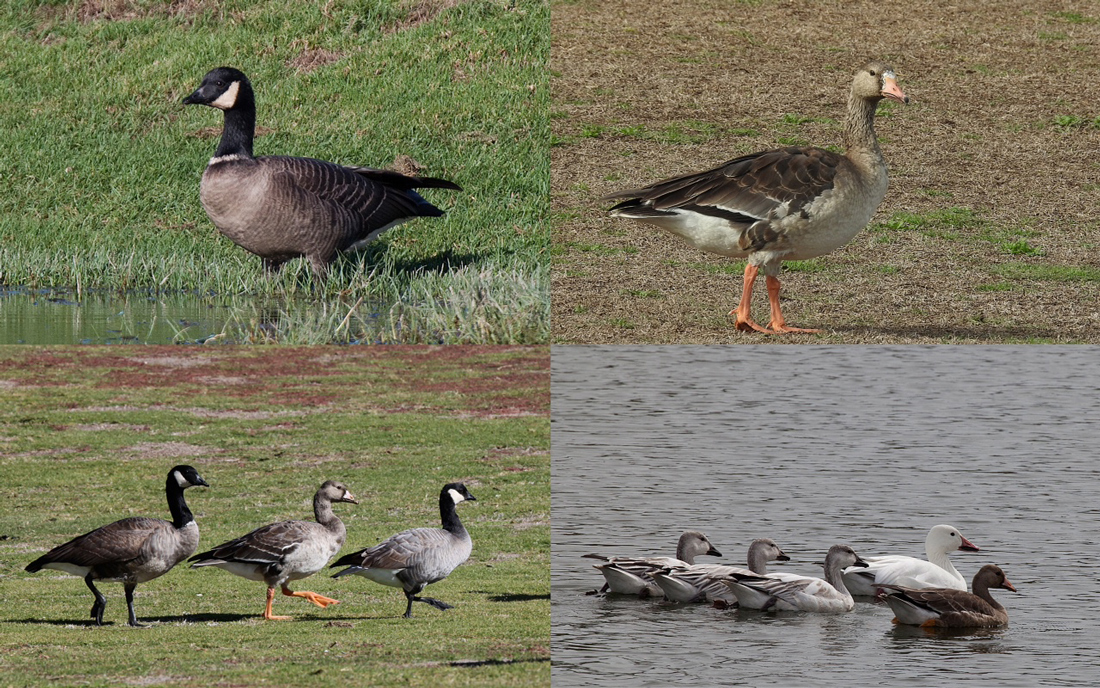 Click on image to see larger. Clockwise from upper left:
Aleutian Cackler (Branta hutchinsii leucopareia), 4,000 miles from its summer home in 2010.
Greater White-fronted Goose, currently in residence with two more of the same.
Snow Goose and Greater White-fronted mixed flock in 2012-2013.
About as mixed as a flock can be, L-R, Lesser Canada, Greater White-fronted, and Cackler.
Photos courtesy of Tom Haglund/BCS Birds

Snowbirds? Yes. Birds of a feather? Well, not necessarily.

Somehow, geese from as far away as the Aleutian Islands and the far north of Canada find their way to the artificial lake on the Loreto Bay golf course to spend the winter. How and why they do this is anybody’s guess, but here they are, year after year, an always changing panoply of small, often oddly mixed goose flocks.

Geese are gregarious birds and not usually seen alone. Some Snow Goose flocks number in the tens of thousands. That some migrating birds get separated from their peers is understandable since their long and dangerous trips, some nearly 4,000 miles each way, may take them through hunting territories, food shortages, dry country, severe winds, and even over stretches of water – sometimes solidly frozen water.

However it happened, our flock in the winter of 2012-2013 was a trio of very different geese from widely separated places in North America. We had one Lesser Canada Goose (Branta Canadensis parvipes), one Greater White-fronted Goose (Anser albifrons), and one Cackling Goose (Branta hutchinsii minima). They passed the winter as an inseparable unit, behaving in every way as though they were the same species of goose.

Another year we had a flock of juvenile Snow Geese accompanied by one adult Snow Goose (Chen caerulescens) and one adult Greater White-fronted Goose. Interesting family, some were related by more than just their gooseness. I guess sometimes just being with geese is good enough for a goose. This year our wintering flock is all of a kind; Greater White-fronted. You may see them anywhere on the tenth or eighteenth fairways or in the lake between. 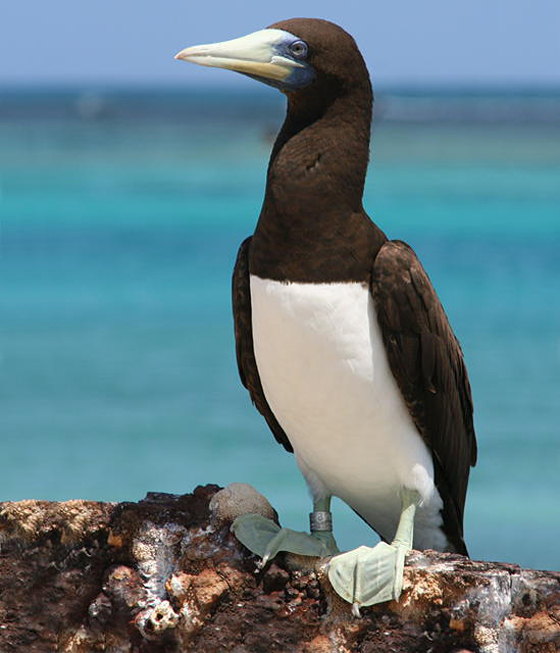 During a survey on November 3, 2017, biologists observed four nests and 102 individual birds on Sutil Island off the southwest end of Santa Barbara Island, the smallest island in the park. The adult birds appeared to be incubating eggs or possibly tending to small young on the four nests.

The adult breeding pairs displayed characteristic mating behavior such as pair swapping, a practice of taking turns tending to the nest, and defending the nests from invading western gulls. Channel Islands National Park is officially a Sister Park to Bay of Loreto National Park in BCS, México, where brown boobies are not an unusual sighting.

“This discovery, once again, demonstrates the importance of the Channel Islands as critical seabird habitat,” said Channel Islands National Park Superintendent Russell Galipeau. “This makes for a total of 14 species of breeding seabirds, birds that rely upon the rich marine resources and the isolation of these offshore islands to provide food and undisturbed nesting grounds safe from predators.”

Brown boobies, generally considered a tropical or subtropical bird, appear to have been extending their range northward since the 1990s when they first migrated to the Coronado Islands of Baja California from the Gulf of California and Pacific coast of Mexico. This expansion of their range coincides with shifts in oceanic conditions with warmer waters and changes in prey availability associated with recent El Niño events.

An impressive seabird species, brown boobies are known for making spectacular plunge dives from heights of up to 50 feet to feed on surface fish. They nest on islands, laying their eggs on the bare ground, and making nests with sticks, rocks, bones, and vegetation to protect them. They winter far out to sea.

Worldwide, brown booby populations have declined due to habitat degradation on islands where introduced predators have reduced their nesting success. For more information on Channel Islands National Park, visit:

10 Years of Conservation – We Are All in this Together! 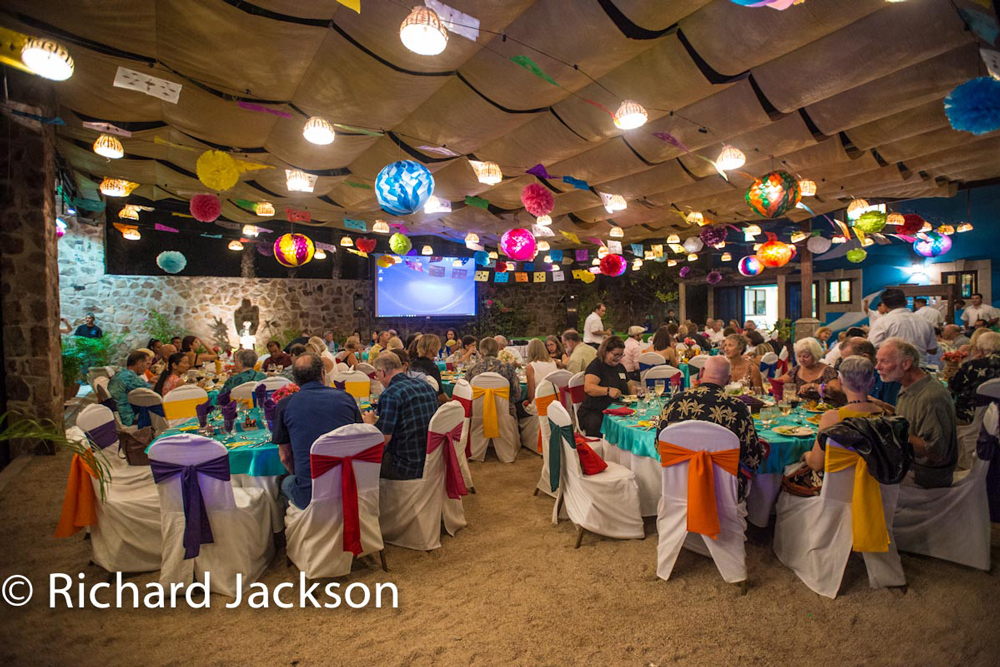 In last month’s Soundings we said a lot of thank you’s, but didn’t have room to list all the friends and businesses and organizations that took part. We also reported great financial success, and can now confirm that the event was the most successful event financially in the history of Eco-Alianza.

If you missed it, check out the photo gallery of Rick Jackson’s photos from the event, CLICK HERE. Thank you Rick Jackson! And while we’re at it, thank you to everyone else who combined to support conservation and environmental education in Loreto like never before. We recognize that any attempt to create an all-inclusive list inevitably overlooks someone or includes spelling mistakes. We apologize for any mistakes or omissions and thank you so much for your support.

Thank you Supporters, Donors, and Sponsors:

We appreciate all the support and look forward to your continued participation! Thank you and Merry Christmas! 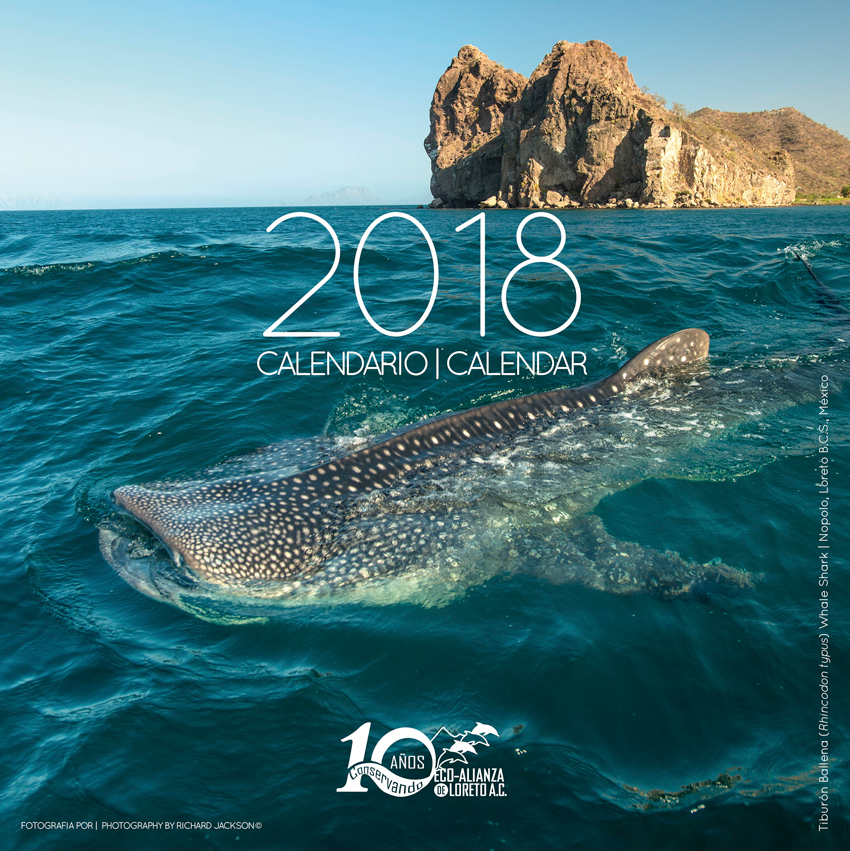 The calendars are available for sale by check in the USA and Canada – mailed to:

Local purchases for calendars in Loreto can also be made by debit, credit card and cash.