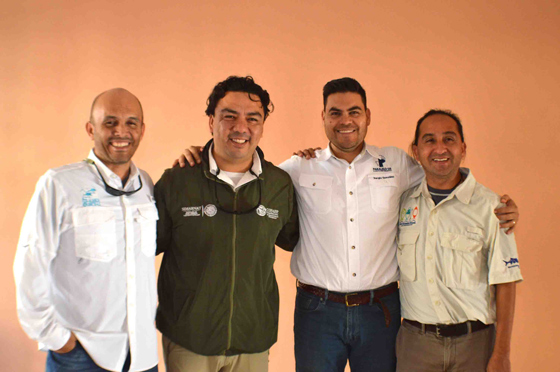 Now entering its third year is a collaboration among four nonprofit organizations in Northwest Mexico, including Eco-Alianza, to strengthen surveillance and enforcement of fishing and environmental regulations in at least six marine protected areas.

Sergio Gonzalez, the regional coordinator for ProNatura Noroeste, presented a slide show overview of the collaboration on December 17 at the Loreto Bay Community Center. ProNatura is the largest Mexican environmental/conservation NGO, with more than 500 employees and board members throughout Mexico working from six regional offices.

Gonzalez reported on successful efforts to raise funds for surveillance and enforcement, as well as highlights of some of the efforts locally. Among other activities, the four organizations of Paralelo 28 (ProNatura, Eco-Alianza, Niparajá, and RED de Observadores Ciudadanos La Paz) are soliciting sponsorships from businesses and individuals, selling stuffed animals through hotels and tourist service providers, placing clear lucite collection boxes at retail establishments, applying for foundation grants, and selling conservation bracelets in addition to those that are already required in national marine parks (sold by CONANP).

He reported that in Los Arcos National Park in Jalisco and Marieta Islands National Park in Nayarit, more than a million pesos have already been raised to support surveillance and enforcement there. More than 90 percent of tourist service providers there have agreed to add a surcharge to their services to purchase the bracelets and support the program.

Locally, Gonzalez emphasized the need for funding with a slide showing cuts to CONANP’s Bay of Loreto National Park (PNBL) operating budget over the last five years, which in 2018 is roughly a third what it was previously. Just $150,000 pesos was available in 2018 to protect the resources of this 510,000-acre park, and its five islands.

Hugo Quintero, Eco-Alianza’s Executive President, explained some of the ways that ProNatura and Eco-Alianza have worked together over the last two years, as an adjunct to the official Paralelo 28 activities. With support from individuals, grants secured by ProNatura, and a US Fish and Wildlife Service grant secured by Eco-Alianza, PNBL was supplied with two new outboard engines and a new patrol boat, in addition to gasoline and coordinated training for the six federal agencies involved in surveillance and enforcement in marine protected areas. 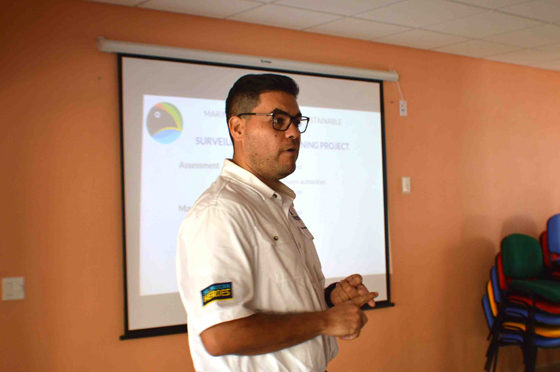 Additionally, the Park received a high-definition camera that is now mounted and operational on the lighthouse in Loreto, communications equipment to contact park rangers in the field, funds for additional park rangers, and tablets and software to record results of patrol trips. These efforts already have resulted in more than 20 coordinated enforcement actions. Depending on fundraising results, future plans include a radar system, additional high-definition cameras, and more funding for park rangers.

Israel Popoca, the PNBL Director, also was on hand during the presentation and confirmed that all of these efforts have been effective and highly appreciated. Despite the reduced Park budget, he said, thanks to these efforts surveillance and enforcement of illegal fishing and other inappropriate activities within the Park have improved significantly. 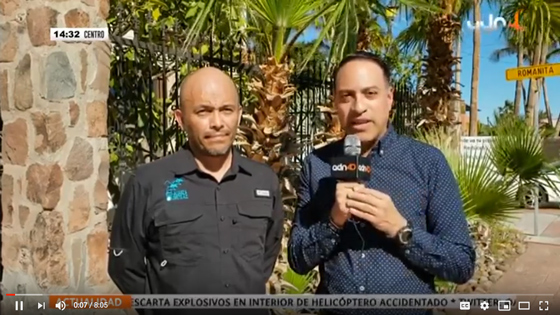 Eco-Alianza and Loreto received national exposure last week with the nationwide broadcast of this wide-ranging 8-minute interview (in Spanish) of Eco-Alianza’s Executive President and co-founder Hugo Quintero, click here to view. Hugo was interviewed in Loreto by Carlos Mota, the Business and Economy reporter for adn40mx, the Mexico City television station. Through their transmitters around the country, the station is available to 85 million people throughout México. While in Loreto December 20 to 22, Mota also sent out numerous tweets indicating his enjoyment of his visit (@SOYCarlosMota)! 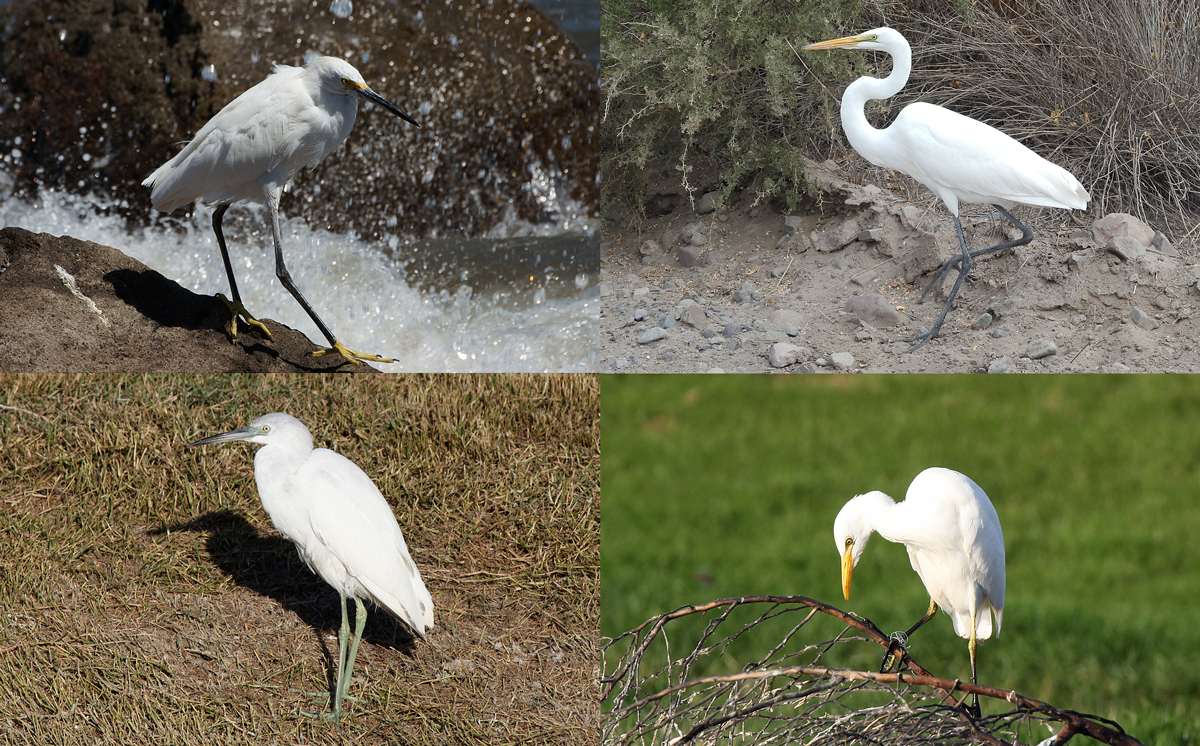 Photos, clockwise from top left: Snowy Egret fishing close to the Loreto malecón. Its Spanish name means Heron of Golden Toes.
Great Egret hunting mice and lizards in open desert, a frequent departure from its fishing behavior.
Cattle Egret grumpily examining some discarded fishing line entangled on one leg. This may prove fatal over time as it will likely interfere with the bird’s lifestyle.
Little Blue Heron with just the tiniest bit of blue starting to grow in on top of its head.

Now that the wintering bird population is arriving and getting settled into their routines it may occur to you to ask; what are all those big white birds? Well, they are several different things, actually. The trick is telling them apart.

We normally go about identifying birds by a list of clues, such as Size, Bill Shape, Posture and Overall Shape, Plumage Colors, Habitat, Behavior, Field Marks, and Voice. Now take these white birds; they’re white, so plumage color’s not much help. They pretty much hang in the same areas and do very similar things, so scratch those two. They don’t sing, and if put to flight they can all sound quite the same with their gravelly alarm croaks. Their bill shapes are so similar as to offer little in the way of ID help.

Size is some help if you see a big one alongside a little one, but, well, how often does that happen? We must look closer at these individuals to sort them out than with many other bird species, otherwise you are just looking at some large white birds

Probably the commonest occurring in this area is the Snowy Egret (Egretta thula) whose very yellow feet and black bill set it apart. Reverse that foot/bill coloring and you have the Great Egret (Ardea alba) also very much the largest of the four described here. The Cattle Egret (Bubulcus ibis) has a yellow bill, dark yellow feet and legs, often very dark but not black, and a somewhat different posture from the others, sort of slouches much of the time. The Little Blue Heron (Egreatta caerulea) has greenish/yellow feet and legs and a two-toned beak with a contrasting dark tip.

Seasonally, and according to maturity these four molt and color quite differently, but at this time around here they are pretty cryptic. Sorting them out can be fun, challenging, even frustrating. If we were somewhere like Florida, another three big, plain white birds with similar shapes can be found.

Last month we reported on the great success that was Eco-Alianza’s 2018 11th Anniversary Gala. To see the photos from the event, click here. Since the event, we’ve received additional support from several donors who couldn’t attend. Thank you so much! As we prepare our 2019 budget, we’re grateful for the vote of confidence in our expanding suite of programs and projects. Happy New Year!