Fishing is for the Birds 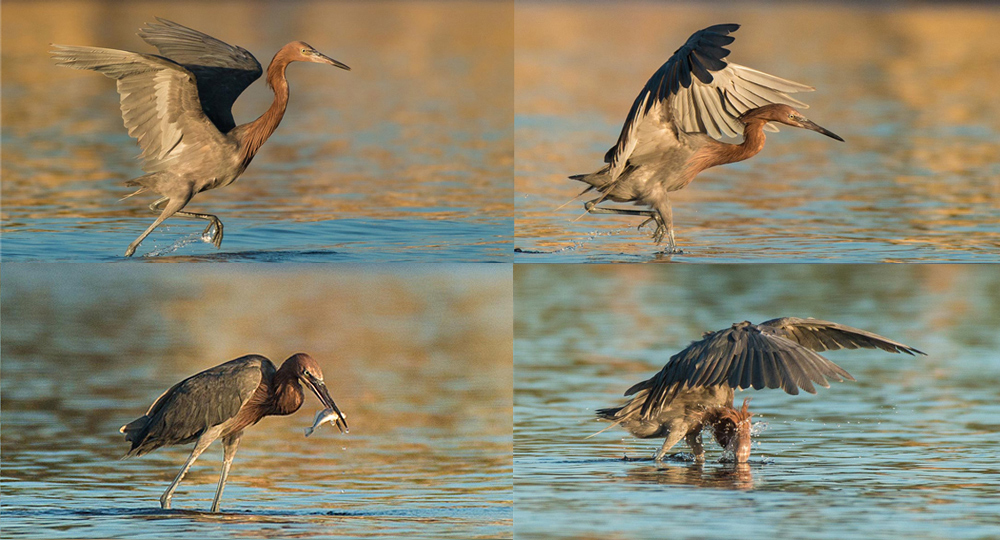 This photographic series by Rick Jackson proves how the proper tools and the proper technique make for an effective combination, as this Reddish Egret successfully catches breakfast (clockwise from upper left). Summer heat in Loreto demands efficiency in movement!! 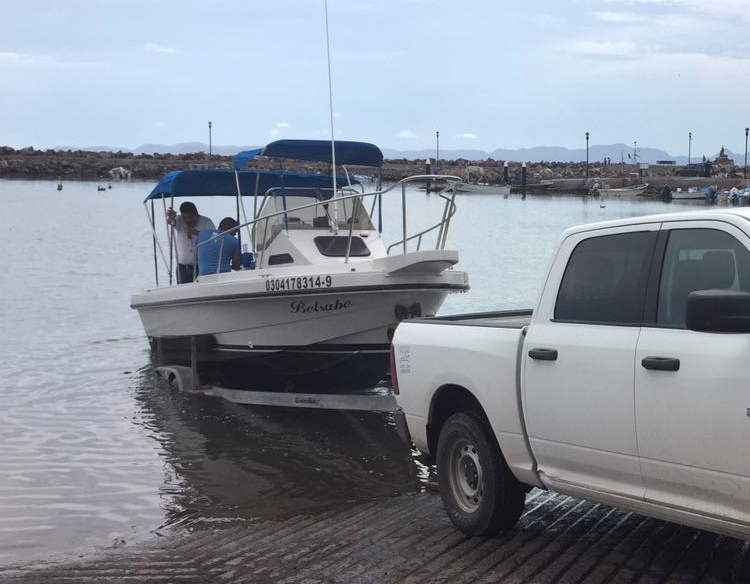 Last winter a lot of Loreto Bay residents got a dose of reality when they attended an open discussion with Bay of Loreto National Park Director Alejandro González Leija, an event sponsored and organized by Eco-Alianza.

They learned that the Park’s operating budget has been cut by more than 50 percent, and also about difficulties the Park faces when addressing illegal fishing and other inappropriate activities in the Park. Inadequate operating budgets (including gas and boat maintenance funds) impact surveillance patrols, and replacing defunct equipment and vehicles is extraordinarily difficult. And unlike National Park Rangers in the U.S. and many countries, National Park staff in México have no arrest powers. They observe and gather information, but must rely on other agencies for arrest and prosecution. The trail from surveillance to verdict can require efficient cooperation from as many as six agencies, hampering effectiveness.

But as readers of Soundings know, protecting the stunning natural resources of our 510,000-acre World Heritage Site is worth some extra effort. Over the last year, Eco-Alianza has applied for grants and garnered support in alliance with the Park. We have previously reported on our successful initiative to partner with the U.S. National Park Service under its Sister Parks program, which will help in the long-term. And now, with grant support from the Paul M. Angell Foundation, the Wildlife Without Borders program of the U.S. Fish and Wildlife Service, and the Kinninger Family Trust, as well as the efforts of Pronatura Noroeste A.C., the Park will receive a leg up in its surveillance and enforcement efforts.

The combined grants and donations will provide a 26-foot patrol boat, important technology and software tools, gas and maintenance funds, a 200-horsepower 4-stroke outboard engine, and funding for a series of workshops for personnel from six Mexican agencies that operate in Loreto. The purpose of the workshops will be to streamline and strengthen surveillance and enforcement protocols, including chain-of-custody for evidence, inter-agency communications, joint planning methodologies, and multi-agency protocol field testing. The hope is that the protocols will be replicable for surveillance and enforcement efforts in other Natural Protected Areas. Eco-Alianza, in cooperation with the Marine Park, will engage expert facilitators for the workshops, and encourage participation from SEMARNAT, PROFEPA, CONAPESCA, FONMAR, SEMAR, and CONANP, as well as from the Attorney General’s office.

“Everyone supporting this collaboration is optimistic,” says Hugo Quintero, President of Eco-Alianza. “This is an important first step to achieving a goal that we all support – a well-protected and well-managed Park with sustainable resources and transparent, effective enforcement. It doesn’t solve every challenge we have, but it’s a wonderful way to move forward and we’re grateful for the support.” He also mentioned that the Paralelo 28 collaboration will focus on continuing to help fund surveillance and enforcement on an ongoing basis (see article below).

For a sample video, in Spanish, summarizing the enforcement problem, click here. 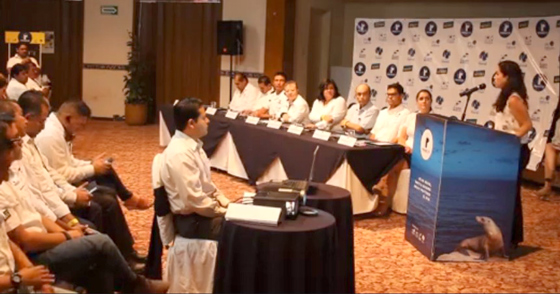 As reported previously in Soundings, Eco-Alianza is one of four non-profit partners in the Paralelo 28 collaboration. Late last month, Eco-Alianza President Hugo Quintero joined in a public presentation in La Paz, where representatives of tourism companies presented a check to support the collaborative efforts. Funds are raised through a variety of methods, including sales of wristbands, stuffed animals, events, and general donations to Paralelo28.org .

In addition to Eco-Alianza, participating organizations include ProNatura Noroeste, Niparajá, and Red de Observadores Ciudadanos La Paz. The groups seek to partner with businesses, tourism service suppliers, tourists, fishermen and society in general, in the defense and safeguard of protected natural areas. Funds raised will be dedicated to support surveillance and enforcement efforts in five natural protected areas in the region, including the Bay of Loreto National Park.

Quintero said he hopes to host a similar Paralelo 28 presentation in Loreto in the late summer or fall. For more information: Paralelo28.org . 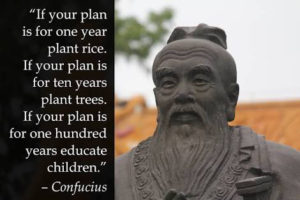 Whether it’s an educational event, a workshop, a field trip, a public presentation, or some sort of teacher meeting or training, there’s always environmental education activity afoot at Eco-Alianza. At the center of it all is Environmental Education Coordinator Edna Peralta.

Getting children and adults outside to experience nature is her favorite part of the job, Edna says, because helping people learn and helping them to make that personal connection is what it’s all about. After more than seven years building the environmental education program at Eco-Alianza, she is hopeful that she may be joined in the not too distant future by another educator.

In the meantime, here’s a brief glimpse at the activities from the first half of this year (a presentation Edna whipped together for Eco-Alianza’s Board of Directors meeting in July:

And for a sense of the impact these environmental education programs have on Loreto’s children, here’s a brief video, with thanks to volunteer “Pepe” Ruiz Cheires and K-Drone Adventure Films  https://youtu.be/_VXF5VmW4bw

Come join us and kick up your heels on November 11 to celebrate Eco-Alianza’s 10 Years of Conservation. Our anniversary dinner/auction has sold out five years in a row, so with limited seating for our hallmark 10th Anniversary we’re expecting to sell out very early. Please reserve your tickets now to guarantee your seats. 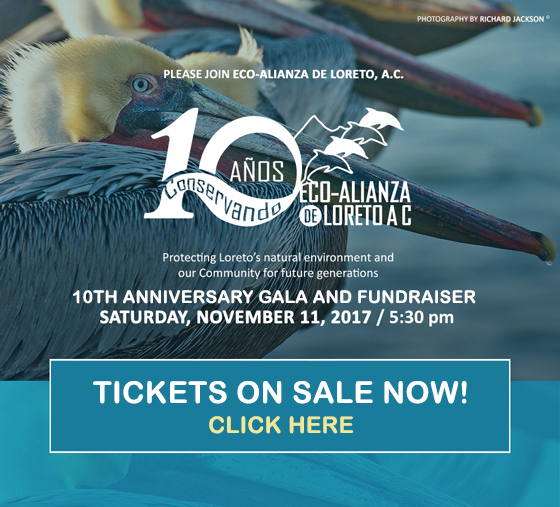 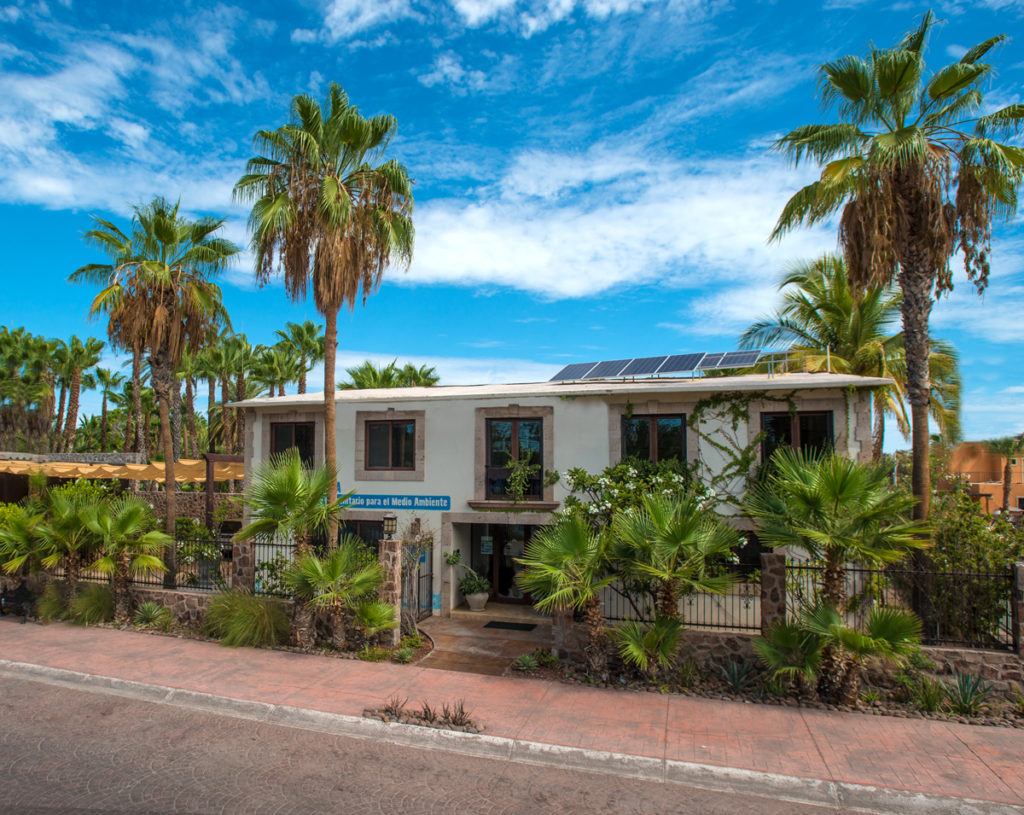 They’ve been in the plans for some time, but the array of solar panels on the roof of Eco-Alianza’s CenCoMA headquarters is an obvious sign of the organization’s long-term energy efficiency effort. Energy-efficient lighting, modular air conditioning units, outdoor plantings, and a shade-covered courtyard also have contributed to improved energy efficiency.

Hugo Quintero, Eco-Alianza CEO and co-founder, said the nine solar panels and accompanying microinverters are just the beginning. Additional panels will be added over the next year or so, coordinated with other building improvements, to maximize energy production. Each panel is tilted at the perfect angle to take full advantage of sunlight throughout the year. 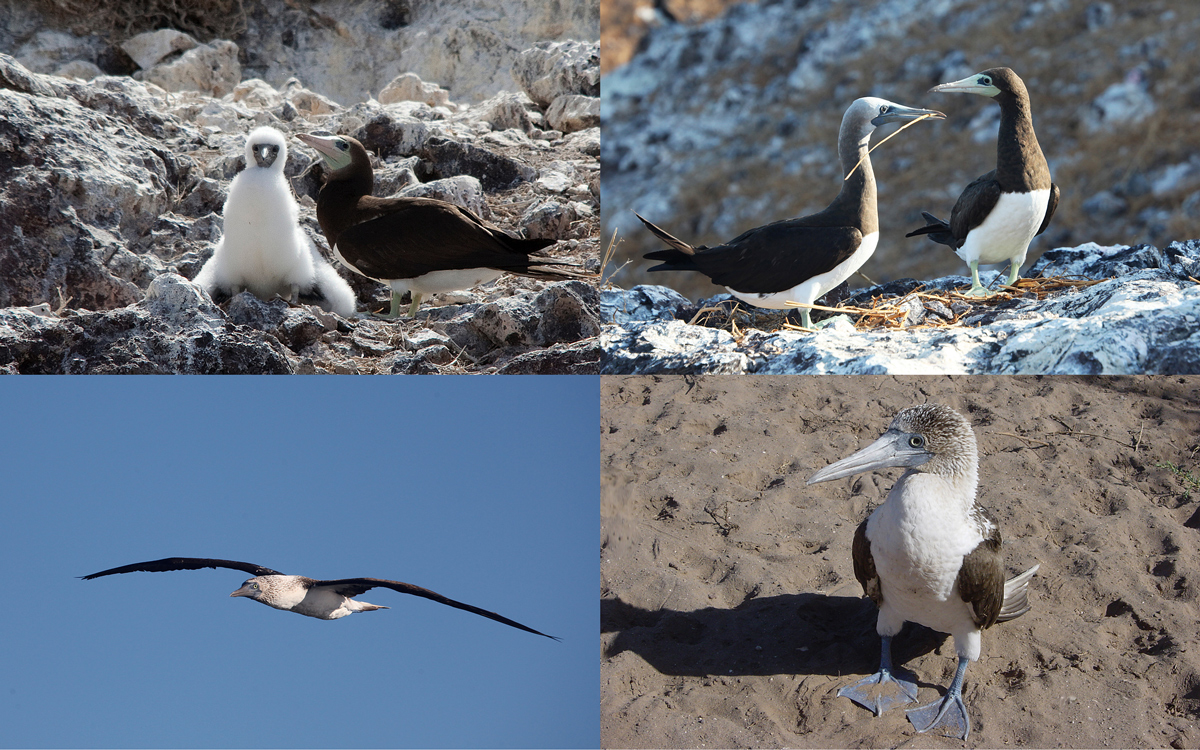 If you’ve been missing seeing the Boobies the past few months there’s good news: they are returning from their annual nesting grounds to Loreto in good numbers. They leave in spring and go to several islands to nest. The Brown Booby (Sula leucogaster) usually lays two eggs. The Blue-footed Booby (Sula nebouxii) lays one to three. Both parents bring food to their chicks and regurgitate it for their consumption. Neither species typically raises all of its chicks successfully.

Both birds dive for fish, the Blue-footed generally from higher than the Brown and very vertically to gain greater depth. The Brown flies lower over the water and dives at a shallower angle, returning to the air very quickly after most dives, whereas the Blue-footed often stays submerged for several seconds. The Blue-footed tends to fish in larger groups than does the Brown.

There is a subspecies of Brown Booby (brewsteri) here, the male of which has a whitish head, the females of both types of Browns look exactly alike. The Blue-footed, as the name implies, has blue feet.

Both Browns and Blue-footed can be seen regularly in fall and winter in various locations around Loreto. On the Eastern and Northern cliffs of Isla Coronado they can be quite numerous. The remaining pilings of the old pier on the north side of Las Garzas often has a number of roosting Blue-footeds. Both species can be seen diving for food all along the malecón and beaches. 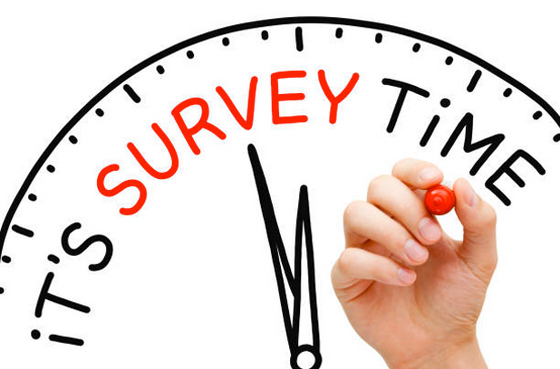 Early last summer, we embarked on a quest to inform more fully, and to interact more frequently, with everyone interested in Eco-Alianza’s mission. The initiative included Soundings – a new, monthly e-newsletter.

Last month we began a 10-question Readers Survey, which ends a week from today. Please take two minutes to share your thoughts about Soundings’ first year, and you may find yourself the lucky winner of an Eco-Alianza cap or T-shirt – our way of saying thanks for your time and your opinions!!

Coming in the September Soundings 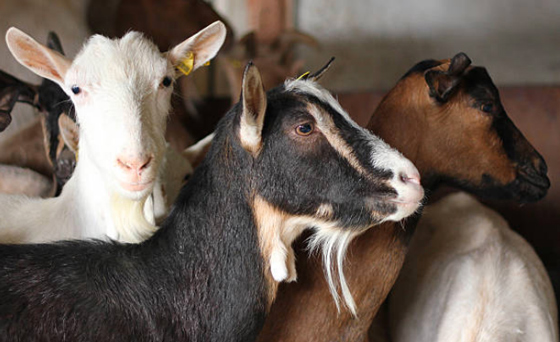