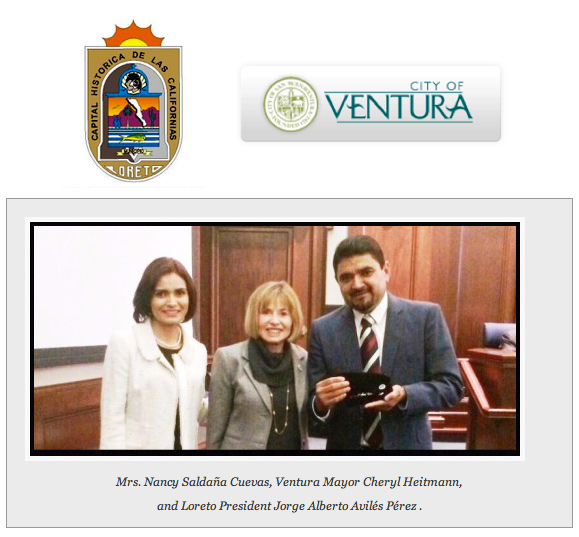 On Monday, March 30, 2015, President Jorge Alberto Avilés Pérez of Loreto, Baja California Sur, received the “Keys to the City” of Ventura, California from Mayor Cheryl Heitmann, confirming the Sister City relationship between the two municipalities. The formal ceremony, which took place in the historic Ventura City Hall, included the reading of a proclamation, declaring the relationship between The City of San Buenaventura, California and The City of Loreto, Baja California Sur, “To encourage bi-national promotion of conservation, education, social entrepreneurship and cultural exchange between its citizens and governments in support of the Parque Nacional Bahía de Loreto and Channel Islands Sister Park Project.”

President Avilés thanked the people of the City of Ventura for the distinction of Sisterhood with the City of Loreto. In a short speech, President Avilés remarked that, “Ventura and Loreto are two cities that have in common historical and geographical perspective and the mutual desire to develop appropriate strategies to support conservation and restoration of biodiversity in the respective territories and to continue to work for the mutual good of our sister cities.”

This solidified relationship provides the opportunity, “to work in coordination with the institutions concerned to protect and conserve our environment,” continued Sr. Avilés. The Sister City connection furthers a move toward confirmation of Sister Park/Sister Reserve between the Channel Islands National Park and The Bay of Loreto National Park.

Eco-Alianza de Loreto, A.C. spearheaded the possibilities of the Park inter-relationship, as well as Sister City status, and has served both as facilitator and coordinator of the programs in a close working relationship with the Channel Islands National Park and the City of Ventura. When completed, the Sister Park/Reserve relationship will provide for the exchange of best-science practices, park resource management and enhanced Sister City economies associated with eco-tourism programs including unique cultural exchanges.

President Avilés was accompanied by his wife Mrs. Nancy Saldaña Cuevas, Tony and Linda Kinninger co-founders with Hugo Quintero Maldonado of Eco-Alianza, Marla Daily and Kirk Connally, of Santa Cruz Island Foundation and Terra Marine Research & Education, Inc., and Norma Garcia, the representative of the Loreto Sister Cities committee and a member of the Board of Directors of Eco-Alianza.

The day after the ceremonies, Mayor Heitmann and the contingency from Loreto enjoyed a boat tour to Santa Cruz Island, hosted by Island Packers, where they routed the University of California Research Field Station facilities with an inland Jeep tour. Following lunch, the group boarded a small plane for an aerial tour of the Channel Islands and a flight back to the Camarillo airport. That following evening, the Sister Cities committees met at City Hall to begin planning first steps. Mayor Heitmann lead the meeting with introductions, short presentations and a Q & A for all those attending.

Eco-Alianza would like to thank all those involved for making this first step both a success and a reality. Special thanks goes to Russell Galipeau, Superintendent of the Channel islands National Park, Kate Faulkner, Chief, Natural Resources Management, CINP, Yvonne Menard, Chief of Interpretation, CINP, and most especially to Mayor Cheryl Heitmann for organizing this first meeting of the Sister Cities and for making the Loreto delegation feel so welcome in their beautiful city. We look forward with great anticipation to the benefits of the Sister City relationship that is key to both the proposed Channel Islands National Park and Parque Nacional de Loreto Sister Park status. 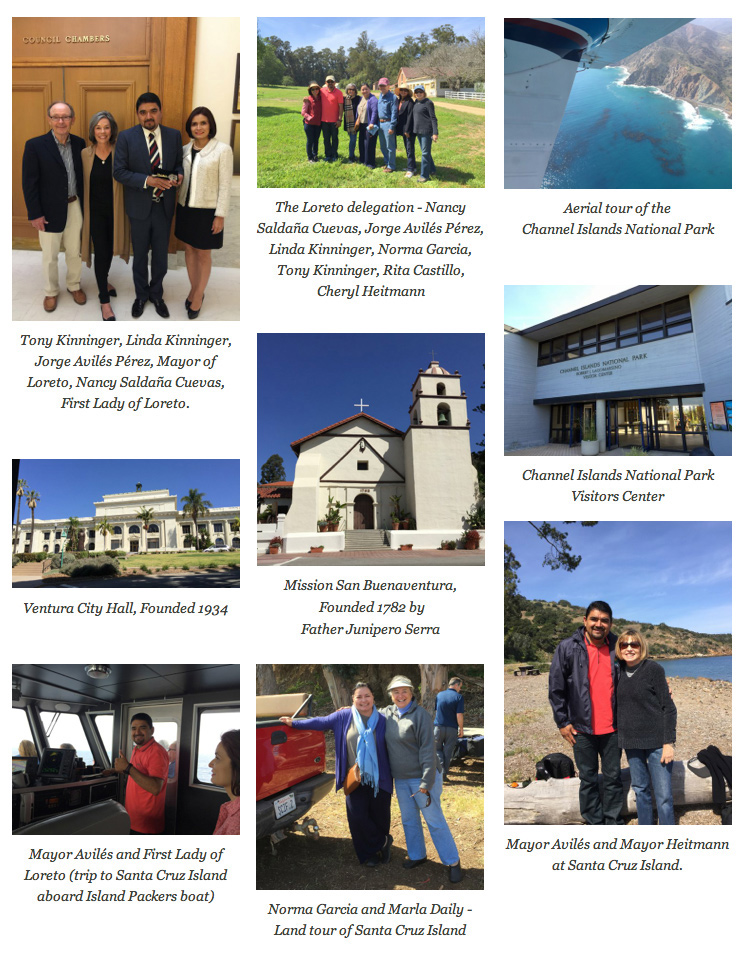