Sister Cities in the Making: Ventura, CA and Loreto, BCS

Sister Cities in the Making: Ventura, CA and Loreto, BCS

Sister City status has moved one step closer! A signed letter from Ventura Mayor Cheryl Heitmann was hand-delivered to Presidente Municipal de Loreto, Jorge Alberto Avilés Pérez, in an informal ceremony at Eco-Alianza’s headquarters, the Community Center for the Environment (CenCoMA) on the 13th of March, confirming the intention of forming a Sister City relationship. A formalization of the joining of the two cities is planned for the end of March in Ventura at the invitation of Mayor Heitmann. 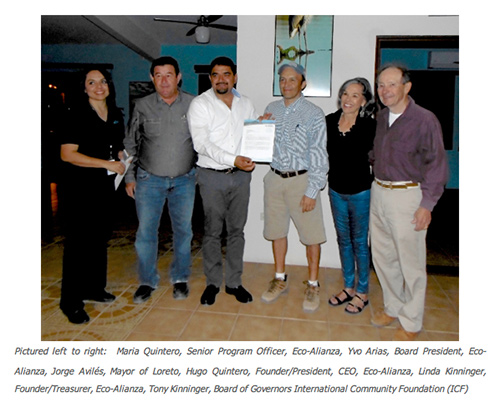 Members of Eco-Alianza de Loreto A.C. began contemplating this relationship during a visit to the Channel Islands in November 2013 to explore the Sister Park project. The November 2013 meeting in the Channel Islands was followed up with a week-long meeting and tour of the Bay of Loreto National Park hosted by Eco-Alianza with representatives attending from the Channel Islands, including Superintendent Russell Galipeau and Kate Faulkner, Chief of Natural Resources and scientific staff. The Loreto visit led to the realization of the similarities of the two cities, and the beginning of discussions to create a Sister Park and Sister City. The sisterhood of the City of Our Lady of Loreto (Loreto) and the City of Buenaventura (Ventura) provides an exciting cross-border framework for shared cultural, business and tourist exchanges and strengthens the alliance between the two cities.

While Ventura has a larger population, there are great similarities between the two cities from a historical and geographical perspective. Both Cities were founded under the influence of the Spanish missionaries, and both hold a unique relationship with five offshore protected islands. Loreto is the gateway to the Bay of Loreto National Park, a World Heritage site, and Ventura is the gateway to the Channel Islands National Park. Both cities share “…a mutual desire to develop appropriate strategies that support the conservation and restoration of biodiversity in their respective territories.”

The Channel Islands National Park supports approval of the Sister City relationship bringing the dream of a Sister Park between the Channel Islands and Parque Nacional de Loreto closer to fruition. When finalized the Sister Park status will provide opportunities for the exchange of shared scientific information, research projects, cultural interchanges and resources.